Movie with a cat and an anti-smoking organisation? [closed]

At some time in the 80s I've seen part of a movie of which I don't know the name. Since I couldn't see it to the end, since then I've always wondered how it continues (and also what was in the jacket; see below).

The movie starts with a cat, and some girl's voice saying "help me". The cat gets then caught and ends up at an anti-smoking organization, and the movie then focuses at a man consulting the organization. That organization has some "electro-cage", which they demonstrate with the cat, and which makes whoever is inside "dance" through electric shocks. They say that it the man smokes again, they'll put his wife into that cage, if it happens again, his daughter, and if it happens yet again, they'll send someone to rape his wife. To the question of what happens if he smokes yet again afterwards, he opened his jacket, but I couldn't recognize what was inside; it must have been something that answered the question. The man tries not to smoke, but ultimately fails to do so, and they put his wife in the cage. Then the cat escapes, and the voice of the girl again says "help me". That's the part of the movie I've seen. While the smoking story seemed like it ended, the "help me" afterwards makes me believe that this wasn't the end of the movie (that is, the part I've not seen is probably more than just the closing credits).

Since it's so long ago, I might mis-remember some detail. However I know that it was played from a video tape (can't tell if it was recorded from TV, or a bought tape).

Does anybody know that movie?

As soon as I saw the words 'cat' and 'cigarettes' I knew you were talking about one of my guilty pleasures from the mid-eighties ;)

From the IMDb page:

Three horror-thriller tales revolve around a mysterious stray cat which is attempting to find a little girl in trouble. In "Quitters, Inc.": the cat is picked up by a shady New York "doctor" who uses experimental techniques to get people to quit smoking. His latest client is a man named Morrison, who learns he'll suffer some terrible consequences if he tries to cheat. 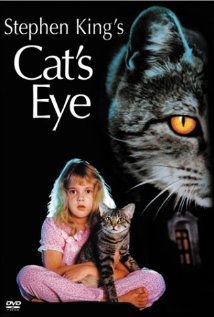