Why didn't Brad Pitt win Best Picture Oscar Award for Departed, even though he served as producer for the film?

Why was Bard Pitt not nominated for the Oscar for Departed (2006)?

Bradley Cooper's name is listed for Best Picture for Oscars because he served as producer for American Sniper:

Then why was Brad Pitt's name not listed for Departed (2006), even though he also served as producer for the movie?: 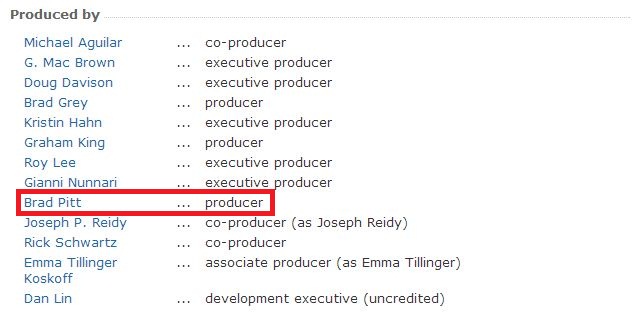 The Academy of Motion Picture Arts and Sciences has ruled that only Graham King will get the credit for the crime drama “The Departed,” leaving Brad Pitt and Paramount Pictures studio chief Brad Grey out in the cold.

When a film wins an Oscar, it’s the producer who accepts the golden statuette and gives the acceptance speech. Rules adopted by the academy in 2000 limits credited producers to three in order to avoid handing awards to a mob of “producers,” some of whom may have gained the credit for little or no effort.

The academy also decided that only one producer would get credit for the Martin Scorsese film “The Departed.”

4
How many "Oscars" are given out per category

12
What is the criteria for selecting a foreign movie for the main category awards in Oscars?
19
Which Best Actor/Actress Oscar nominee shows up the latest in his/her movie?
11
How can one be nominated for an Oscar as "Best Actor" and "Best supporting Actor" in the same Film?
46
Why aren't the front of Oscar winner envelopes marked with the award they're for?
5
What rules govern nomination of an animated film for Academy Award for Best Picture?
10
Was anybody ever denied an Oscar or other award because of the Hollywood blacklist?
3
Why are the Oscars unimportant for Woody Allen?
8
Why didn't the 19th Academy Awards award the Best Documentary Feature?