Why would a movie that appears pornographic via it's rating (X) receive an Academy Award?

When looking at the IMDb page for Midnight Cowboy, it says that the movie is rated X but won 3 Oscars. I always assumed an X-rated movie is a pornographic movie. Does this mean that Oscars can also be given to pornographic movies? If not, how does this fit together? 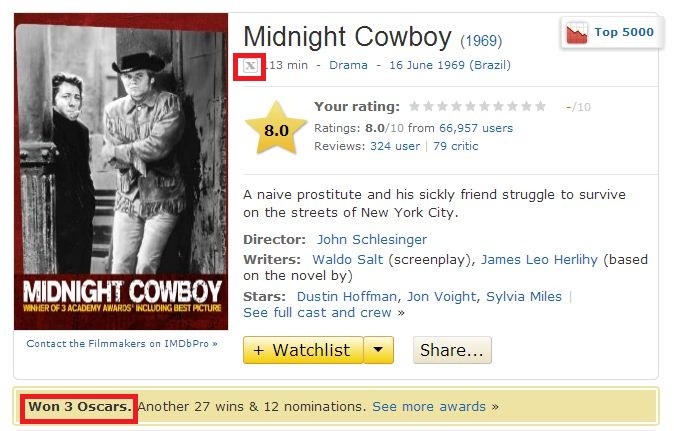 Quite simple: Midnight Cowboy is not a pornographic film. What we have here is a misunderstanding of the original intent of the X rating, which gave rise to the NC-17 rating.

Several films from the late 1960s through the 1980s had the X rating applied, including A Clockwork Orange, Beyond the Valley of the Dolls, Fritz the Cat (an animated feature), Last Tango in Paris, and the original The Evil Dead.

However, the key thing about the old X rating is that it wasn't trademarked by the MPAA, and could thus be self-applied to any film. Basically if a studio knew their movie would be deemed unsuitable for children, they could simply self-apply the X rating themselves without submitting it to the MPAA for rating, and that would be that. However, a movie could still be submitted to the MPAA for rating and be given a rating of X.

Well, as pornography became more accepted through the later half of the 20th century, pornographic film studios began to self-apply the X rating when releasing their films, and then began the trend of applying XX or even XXX ratings to really emphasize the amount of gratuitous sex in their films. This led to problems with any film that used the X rating being seen as pornographic, and led to issues for films that were submitted to the MPAA only to be given an X rating without actually being pornographic (because the MPAA would never apply any rating to a pornographic film to begin with). In late 1989 to early 1990, two critically acclaimed art films were denied ratings by the MPAA: Henry: Portrait of a Serial Killer, and The Cook, the Thief, His Wife & Her Lover. This caused an uproar about films of this nature having limited distribution routes due to the ambiguity and misunderstanding of the X rating, as well as these two films in particular being given limited distribution routes due to what many felt was a flawed and misunderstood rating system.

The solution was to implement the NC-17 rating, which was first applied to the film Henry & June, but unfortunately many entertainment outlets began to refuse to showcase even NC-17 films, entertainment publications would refuse to advertise them, and many retail stores refused to stock and sell them, because they saw the NC-17 rating as a rebranding of the X rating. Today the NC-17 rating is essentially seen as a mark of death for many films, causing many production companies to cut down on the material the MPAA found to be offensive (if they can even get them to divulge such information in the first place) to earn it an R rating, often referred to as "Hard R" by the media and film-goers. Originally NC-17 was intended for anyone age 17 and older (16 and younger weren't allowed in, even with an adult present), but in the mid-90s was adjusted to mean no admittance to anyone 17 and under, only adding to the misunderstanding of the NC-17 rating being a rebrand of the X rating.

Midnight Cowboy was controversial for its time due to its nude scenes and its depiction of a male prostitute, but did not show penetration (which would have garnered it a Triple-X rating). As this quote points out, the rating was lowered to R when it was re-released the following year. As pointed out by MattD, this was not a pornographic movie, it just contained content that was beyond the R rating used at that time.

It was notable for being the first and only X-rated film (its nude scenes and bold content - sex and drugs - were shocking for its time, but its X-rating for its initial release was later downgraded to R when the film was re-released in late 1970) to receive the Best Picture Oscar from the Academy of Motion Picture Arts and Sciences. It garnered seven nominations, including Best Actor (Dustin Hoffman and Jon Voight), Best Supporting Actress (Sylvia Miles in an extremely brief on-screen role), and Best Film Editing (Hugh A. Robertson), and ended up with three Oscars - Best Picture, Best Director, and Best Adapted Screenplay (by Waldo Salt from James Leo Herlihy's 1965 novel). It was an archetypal film for the "New Hollywood" of the 70s, with its adult themes of alienation, sex and drugs, anti-authoritarianism, and a quest for freedom. (1)

All of the awards were won in 1970, so it's unclear whether they were awarded for the 1969 release or if anything was edited for the 1970 release.

My understanding is that it did win the Oscar as an X movie, (The only movie ever to do so) but the rating was changed afterwards to R or R plus.

3
Reasonable metric for “popularity” in movies
12
What is the criteria for selecting a foreign movie for the main category awards in Oscars?
7
Why were the 90's considered cynical in the US when most Hollywood output I remember seemed optimistic?
10
Has the MPAA ever allowed full-frontal nudity in a PG-rated movie?
10
Interpretation of two big jumps in movie history
10
Was anybody ever denied an Oscar or other award because of the Hollywood blacklist?
2
Do movie soundtracks video clips follow the movie's age rating?