I'm looking for a movie about some friends, who are going somewhere in a car. Then they get into a great fog, and they couldn't go further, so they stop. Then the film has a flashback like thing about the friends previous life. In this, one of the guys was a rich person, who had two sons, and raised one of them in poorness and suffering, and the other one in richness and with great attention. And as far as I remember, the rich boy killed his father. Then they go back to the present time, and the fog disappears.

Update: I think there were three of them in the car. One man, who drove the car, his girlfriend, and an other guy who was their friend. At one point, the driver guy gets out, and put something burning into the end of the chain, and waved that over his head, I think he tried to get rid of the fog this way.

Sounds like Fogbound from 2002 with Luke Perry. From an online review:

A married couple, Ann (Orla Brady) and Leo (Ben Daniels) are driving across the French Alps in the company of a friend, Bob - played by former teen legend Luke Perry - with whom there is unexplained sexual tension. Their car is marooned in fog; there is nothing for it but to wait, and their uneasy banter is interspersed with stylised flashbacks, giving clues not merely to their present situation but to Leo's psychotic state. Because Leo has a terrible guilty secret, inducing a delusional multiple personality disorder which has made him believe that in a past life he was a duke in revolutionary France - and there are "flashbacks" to this existence, too, in full period costume! 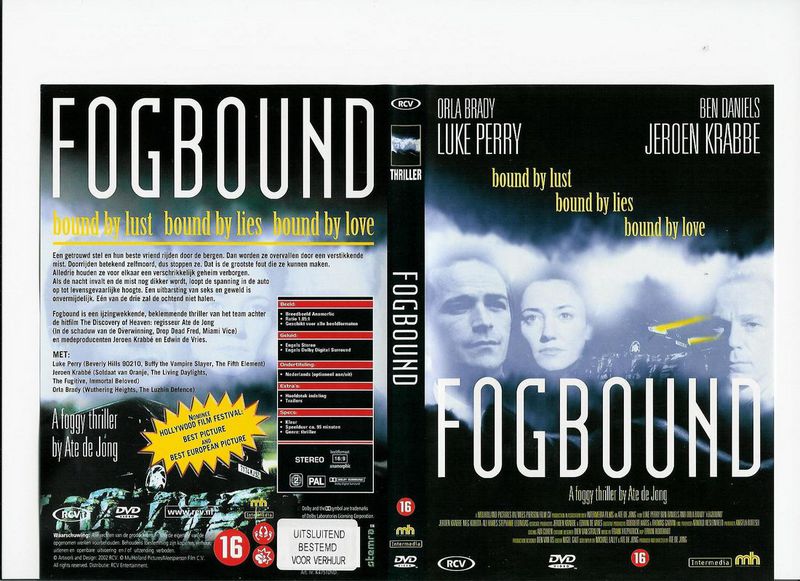