Explanation for all beings to be able to speak English?

In Guardians of the Galaxy, it appears that nearly every being in the universe is capable of speaking English. While I understand that many people prefer English over made-up languages with subtitles, I feel like there should be some explanation (e.g. Babel fish in the Hitchhiker's Guide). Is there reasoning beyond that's-how-the-comics-did-it?

There are only a few instances that I can come up with where beings spoke anything other than English (e.g. Groot, Nebula shouting orders to the Sakaaran soldiers).

As Oliver_C mentioned, it's the translator chip in Peter Quill's neck. It can be thought that others have it too.

From the following image we can see about the translator chip. 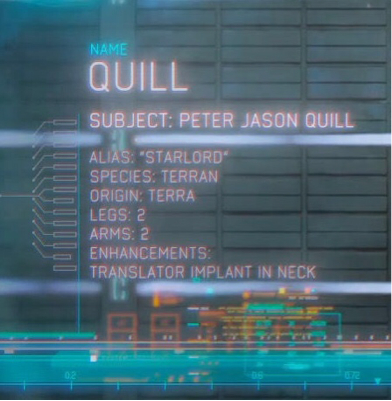 Also the anomaly about some portions where Alien languages(e.g. Groot's) were heard can be explained with this. That translator chip simply doesn't support those languages or sentences etc.

Here is a interesting discussion how Rocket understood Groot. Guardians of the Galaxy - the universal translator which everybody has does not know Groot's language. Rocket's translator does.

Rocket might have changed his translator's technology to understand Groot.

29
Does Marvel have full filming rights for all characters in Avengers Multiverse?
9
Is there an explanation for Batroc's accent?
9
How was Hulk able to speak fluently in Thor Ragnarok?
12
How is Thanos able to hold almost all of the Infinity Stones barehanded?
39
I am Groot? translation: Is there an English translation for all of Groot’s dialogues?
9
How was this character able to catch Mjolnir and Stormbreaker?
6
Is there an in-universe explanation for particular group of superheroes in Endgame?
6
How was this character able to wield Stormbreaker?
1
How was Thanos able to destroy the Infinity Stones?
11
Why was there a need for all of the Pym particles?