I watched Brave yesterday and the film was so dark (light wise) in places that it was hard to make out what was happening.

Why are 3D films darker than 2D films and does it also depend on the glasses used? (do some type of glasses work better than others?)

Also, if 3D films are generally dark - why don't film makers make sure that their films are adequately lit (even in the dark scenes) so that audience can view better?

In 3D films, the 3D glasses are the reason for the dimness.Because the 3-D glasses are darkly coated with polarized filter that decode the images and give them depth dim.

I've found a good link and let me summarize the stuff from that site.

It's hard to fix the dimness in 3D movies.

“Inception” director Christopher Nolan joined the 3D naysayers, saying that he refused to make his new film in the format largely because of the darkness problem.

“On a technical level, it’s fascinating,”, “but on an experiential level, I find the dimness of the image extremely alienating.”

makes “a massive difference” in the brightness of the image. “You’re not aware of it because once you’re in that world, your eye compensates – but having struggled for years to get theaters get up to the proper brightness, we're not sticking polarized filters in everything."

You cannot see so dimness in Avatar 3D, because Avatar was shot in 3D using techniques that boosted the amount of light and compensated for the darkening process to come, was screened at light levels about half of a run-of-the-mill 2D film.

The figure of 16 foot-lamberts is the standard established by the Society of Motion Picture and Television Engineers for a projector with no film in it.

If you add a 2D film to a projector that meets the brightness standard, you’ll generally wind up with about 14 foot-lamberts, considered an appropriate level of illumination.

3D projection, though, displays two separate pictures, one designed for the left eye, one for the right [...] the immediate result of dividing the picture into two images is that, in Lenny Lipton’s words, “You lose half your light, because half the light goes to one eye and half goes to the other.”

Instantly, a 14-foot-lambert image is reduced to 7.

The glasses used to decode the two images [...] then cut the light further.

“Avatar,” says Lipton, generally screened at about four-and-a-half foot-lamberts; other films are as low as two or three.

“It can all be solved,” Lipton insists. “The technology is there.”

Michael Bay and 'Transformers 3' shine a light on theater projection:

Michael Bay has been lobbying theater companies to turn up the brightness of their projector bulbs to make Transformers: Dark of the Moon look better in 3-D. 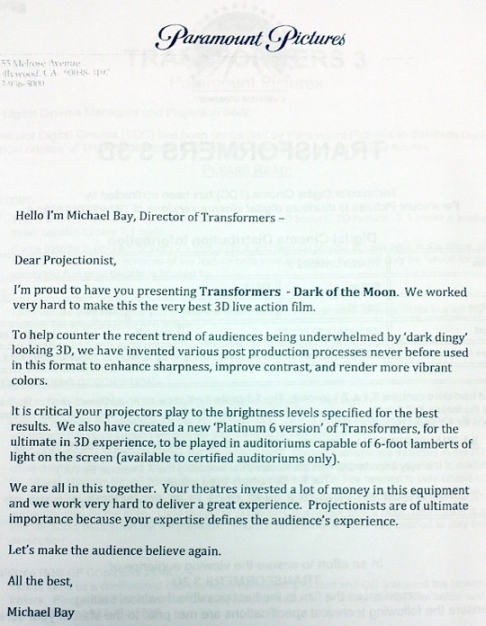 Paramount Pictures has taken the added step of shipping an extra-bright digital “print” of the film to about 2,000 theaters showing it in the RealD 3-D format.

Why would a theater be reluctant to pump up the wattage? It’s because the bulbs can average around $3,200 or run as high as $5,700 and burn out after about 500 screenings, which adds up quickly at a multiplex.

Not the answer you're looking for? Browse other questions tagged production 3d .

38
Why wasn't Interstellar shot in 3D?
3
Was there any notable pushback against “dark” (lack of lighting) cinematography?

29
Why are some actors uncredited in certain films?
2
Original Cooties ending
3
Why are screeners released in DVD format instead of Blu-ray?
16
Are lights a worthwhile investment?
4
Simultaneous, competing co-productions of the same movie?
4
Why was actress Savitri's biopic Mahanati titled differently in Tamil?
0
Why was Sense8 made as a series and not a feature film?
0
Why do these shots from a 2005 Doctor Who episode look blurry?
13
Why are some scenes of a movie shot in public places?