Were Poltergist and E.T. filmed in the same neighborhood?

No, they are not the same place.

According to this site, Poltergeist was filmed in Agoura Hills. 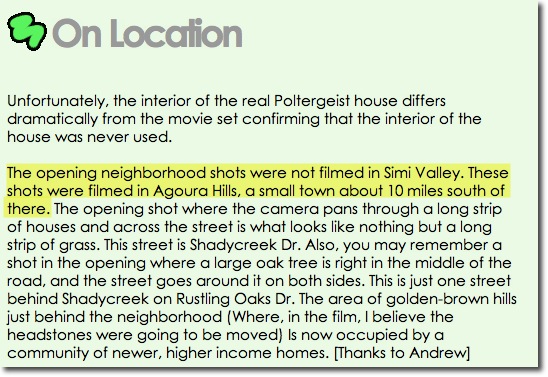 Another page on the same site indicates that the street where they take off on the bike (I assume that's the one you're thinking of) is filmed in Granada Hills.

As a semi-related piece of trivia I found on that same site, in the Charlie's Angel's remake starring Drew Barrymore, there's a scene where she rolls into the villain's backyard, and the house is the same one she and Eliot lived in in E.T.

Not the answer you're looking for? Browse other questions tagged film-location poltergeist et-the-extra-terrestrial .

3
Were the barn scenes in Transformers: Age of Extinction and Astronaut Farmer filmed at the same location?
5
Was E.T. the Extra-Terrestrial shot in 1.85 or 2.35?
9
Avengers: Age of Ultron - "Sokovia" filming location?
4
Were any scenes in Rogue One filmed in Tikal?
12
Unusual parking garage elevator in opening scene of The Driver (1978)
6
What actually happened with E.T. under the plastic sheet?
2
How do film producers and crews film movies based on entire or just a proportion of towns and cities (real cities and towns)?
2
Is this scene with Djarin and the Child an allusion to a scene in E.T.?