What is the meaning of showing the tapetum lucidum (eye glow) of the replicants?

It’s well documented to have been done on purpose, they used a technique called "beam splitting" to make it happen. Blade Runner is even noted on the red-eye effect Wikipedia page.

The replicants' eye glow is meant to reveal their mechanical artificiality to us (and by extension, their lack of a human soul), as if their eyes are merely lenses reflecting light.

Eyes are the windows to the soul. Unsurprisingly, then, eye symbolism is rife throughout Blade Runner: the Voight-Kampff machine focusing on the iris to test empathic responses, a focus on a flawed eye reflecting flames near the beginning, Tyrell's magnifying glasses and then his eyes being gouged out, the fake eyes scene and Hannibal Chew and the eye lab. Even the famous 'enhancing' scene with its use of an endless zoom and a mirror is a comment on digital and artificial perception.

Among all of these, the replicants' glowing eye effect is supposed to mainly convey to us, the viewers, that replicants aren't human. Says IMDb:

Replicants' eyes glow (even those of an artificial owl), although Ridley Scott has stressed that this is merely a cinematic technique, and the glow cannot be seen by the characters in the story, only by the audience.

The glow which is notable in replicant eyes in some scenes creates a sense of artificiality. According to Ridley Scott, "that kickback you saw from the replicants' retinas was a bit of a design flaw. I was also trying to say that the eye is really the most important organ in the human body. It's like a two-way mirror; the eye doesn't only see a lot, the eye gives away a lot. A glowing human retina seemed one way of stating that".

This leads us to the intention behind the glowing eyes: they tell us that replicants are mere reflections. Their eyes are able to receive information but give away nothing in return - other than reflected light. These two interesting articles by John McCoy and Thomas Karantinos discuss the eye motif found in Blade Runner in relation to the replicants' quest for a soul and their ultimate failure. For example:

The concept of memory in the film is tightly linked with vision [...] When Rachael is accused that her memories are fake she defends herself by saying that she remember seeing these things. Her words are significant because our character is structured mainly by memories, and memories in most cases include visual information. [...] In Rachael's case seeing is not believing. She has fake eyes, therefore fake memories and therefore fake (replicant) behaviour.

It's no wonder that the greatest obstacle in overcoming the Uncanny Valley in CGI and robotics has been the eyes. In real life, dead eyes are glazed or milky and doll eyes are glassy and reflect light. Therefore, glowing\glazed eyes are usually used in works of fiction to convey anything other than human, be it the glaring alien kids in Village of the Damned, the Terminator's red eye or the dehumanizing effects of hypnosis and mind control, which were very recently depicted as glowing blue irises in The Avengers. If eyes are the windows to the soul, then when we find nothing behind them - this is just an empty vessel.

[P.S. And as for the question if Deckard's eyes ever glow:

In the scene in his bathroom, when Rachael asks Deckard if he would follow her if she left, he says he wouldn't and then leaves the room, but he stops, puts his hand on her shoulder and says "But someone would." When he says this, Deckard's eyes have a red glow, the same effect seen in the other replicants' eyes and in Tyrell's owl. In relation to this scene, Ridley Scott maintains that that effect was purposely set up and executed on the set, but Harrison Ford denies this, saying it was unintended. In an interview with Paul Sammon in 2007, Ford comments simply "I might have strayed into her light" (Future Noir, 565 - 2nd Edition).] 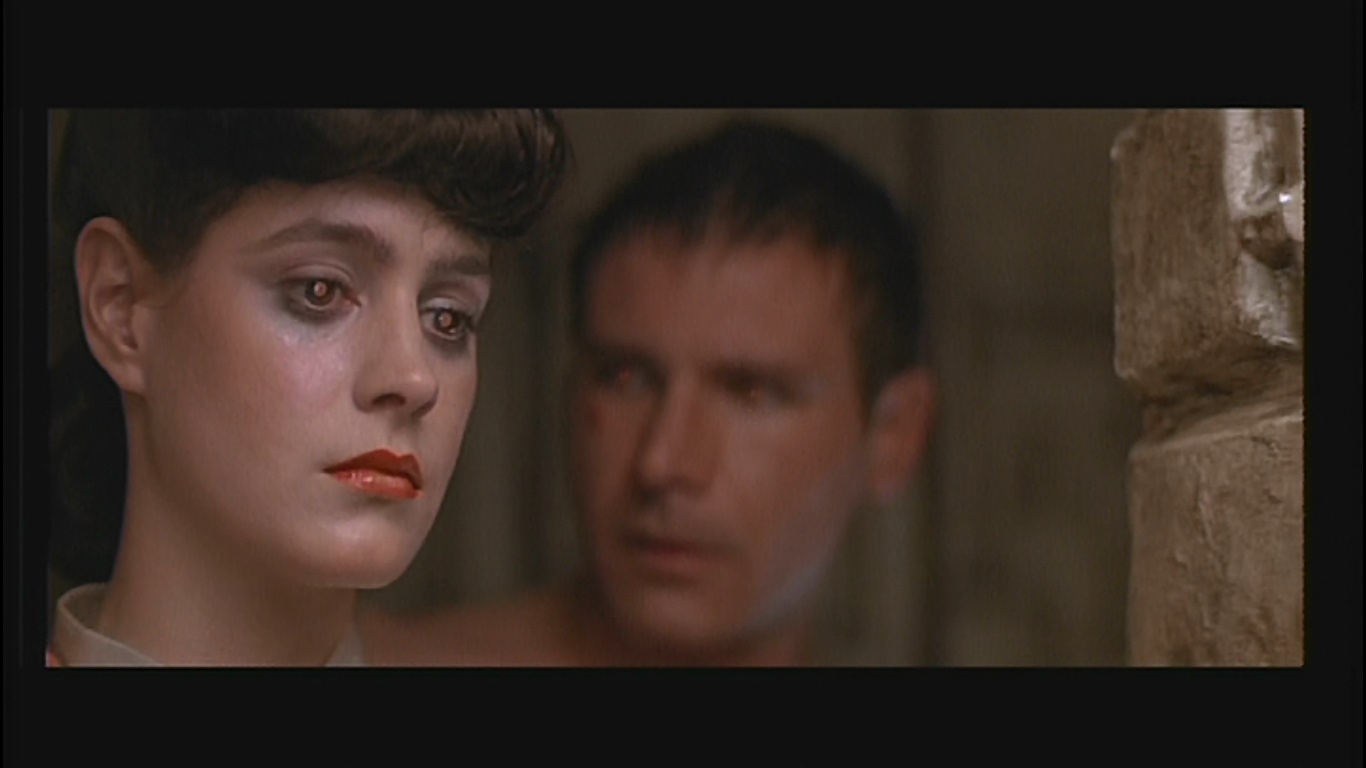 49
What are the differences between the alternative versions of Blade Runner?
4
Are glowing eyes of Replicants only meant for audience?