In Toy Story 2, Woody is a highly valuable collectible but in Toy Story 3 this isn't true any more. We know Andy has The Internet on his room, so he could have easily checked for his toys' prices but it seems that they have no monetary value in Toy Story 3. For example, in a scene when Andy is packing his stuff before going to college, Ham says he is going to check the toy's value on eBay in a tone that indirectly says "we are worthless".

In another scene, Andy says they are just "trash" and at the end of the movie, Andy gives Woody to the little girl purely based on their emotional value.

So what happened between Toy Story 2 and Toy Story 3 to turn Woody from a "collector's item" into mere "trash"?

Andy has no idea of Woody's (and Jessie's) financial value. The only times we see any evidence of this is when he's not around, during the yard sale and after Woody has been stolen. It's clear that he never learned that they had any special worth beyond their emotional value to him and even if he was aware (which he isn't), he has no plans to get rid of the toys beyond putting them into storage.

Ham's comment seems to relate more to his own (negligible) value, not Woody's known value.

Also, in the latest Toy Story Short, Toy Story of Terror (set after the events of Toy Story 3) we learn that Al of "Toy Barn" fame is still willing to pay top dollar for both the Woody and Jessie dolls after spotting them on eBid. 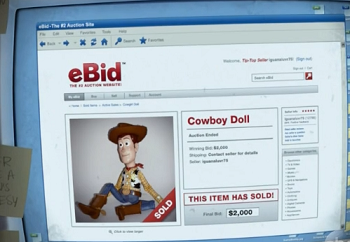 I don't think Woody's value has changed between movies. It's just that Andy wasn't the kind of guy who sells his toys. While he no longer played with them, it was very obvious from the ending scene that he still viewed them as a very cherished part of his childhood memories. He was already planning to take Woody with him to college, and was extremely upset when he thought that the other toys went into the trash. That's not a guy who would have sold his most prized possession, even if he did know how valuable Woody was. Instead, he gave Woody and the rest of his toys to another child who would love them as he did. Money was never a factor in his decision, only love.

1
Why isn't Taggart protected by Double Jeopardy?
9
Where has Woody been?
18
Why isn't it called "The Hateful Nine"?
45
Why do the toys blink alternately?
4
How did Stu buy that valuable number of shares in a company in Suits?
5
What's the Last Item on Shadows Shopping List?
3
Isn't Cochran's plan flawed?
5
Why isn't Jack Sparrow's greatest fear released before?
5
How does Woody not recall from before Andy?