I'm looking for an interpretation or explanation of the events in Enemy (2013) that takes into account all of the following: 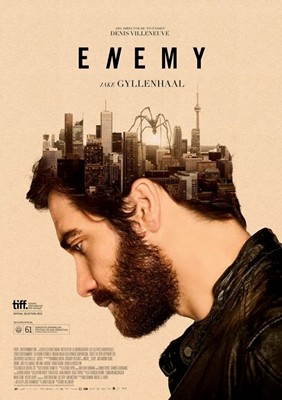 which indicates that at least some parts of the film take place inside the head of actor Jake.

p.s. I saw this related post, read the answer given there and checked links in the comments. I've found the interpretations in those places do not explain all the above.

Tough question for a tough movie. I admit that the movie also left me quite puzzled. What helped me to understand it better to a large degree was Chris Stuckmann's analysis, which I think is pretty consistent.

Now I'm not going to paraphrase the whole thing here, but the main point of it is (and there many people analysing the movie seem to agree) that both Jake Gyllenhaal characters are facets of the exact same person and the movie represents the struggle of said person with the pressure of his marriage and his infidelity and the events of the movie are not to be taken as happening exactly that way in reality. Or as director Denis Villeneuve describes it:

It's a man who decides to leave his mistress to go back to his pregnant wife and we see the story from his subconcious point of view.

But let's look at your specific points. I'll try to explain them based on Stuckmann's version and adding some further thoughts here and there based on that version (I'll also continue the practice of calling them Teacher/Actor Jake respectively, instead of Adam/Anthony):

Not the answer you're looking for? Browse other questions tagged plot-explanation analysis character enemy .

17
Is there significance behind the spider visions in Enemy?

17
Is there significance behind the spider visions in Enemy?
5
Did Helen know the truth at the end of Enemy?
12
Explanation of Bruce/Batman's nightmares?
8
Why were the enemy ships blowing up?
6
Explanation of "Lucumi"
13
Vertigo Scene Explanation - Did Hitchcock Cheat the Audience?
14
Is there a consistent transcript of the chess game between Sherlock Holmes and Moriarty?