How did Batman survive after the fall trying to save Rachel?

In The Dark Knight, during the fund raiser for Harvey Dent by Bruce Wayne, Joker arrives and throws Rachel outside the window. But Batman also jumps outside to save her. They fall on a car which is completely destroyed but both of them survive. Can anyone explain this?

OK, since no other answers came in: Batman has a cape made of a "memory cloth" which can harden and turn into a glider (as illustrated in Batman's building raid in Hong Kong). The cape saves their lives, and IMDb's Dark Knight FAQ page concurs:

How did Batman and Rachel survive the fall from the penthouse?

Batman is able to deploy his cape partially, just enough to slow the fall and prevent serious injury. Because he is holding Rachel, he breaks her fall, too.

[P.S. Like Huangism said, Don't Try This At Home. Some physics students concluded that such a trip won't really end well. But we can always dream. ;)] 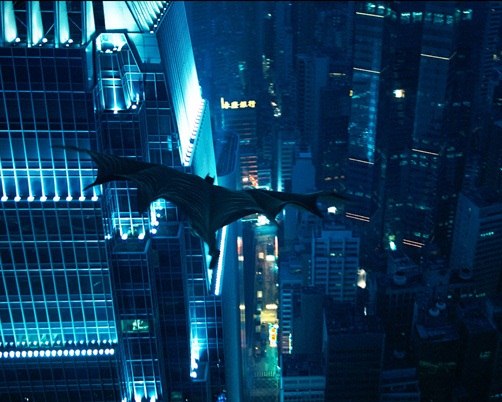 This is mentioned in the film's official novelisation. In short, he tried to open his cape and although it failed, it still managed to slow his fall to the point that he was able to cushion Rachel's fall and that the body armour could prevent him from dying:

She had hit a sloped glass roof belonging to the apartment below and was sliding toward the edge, her fingers unable to get purchase on the glass. Batman dove right behind her and fired his grapple, snagging Rachelâ€™s ankle as they pitched over the edge and began hurtling toward the dark street. Batman tried to get his cape stiffened so that they could glide to the street below, but only half of the cape responded. Batman grimaced and wrapped his arms around Rachel and twisted in midair so he would land first and his armor would cushion them both. They landed hard atop a taxi, rolled to the pavement, and continued rolling until they reached the sidewalk, where Batman got unsteadily to his feet, helping Rachel up as well. She was out-of breath and very pale, but she gave him a smile of thanks.

The original film script also agrees with this version of events:

They drop. Batman fires his grapple, snagging Rachelâ€™s ankle â€“ activates one wing of his cape. They spin and slow. Batman envelops Rachel â€“ they slam into the hood of a passing taxi.

The driver screams as Batman and Rachel hit the roof and roll down the windshield onto the pavement. Alive.

Not the answer you're looking for? Browse other questions tagged plot-explanation the-dark-knight .