What is the real purpose of the star map in Prometheus?

At the beginning of Prometheus, archaeologists Elizabeth Shaw and Charlie Holloway have discovered a pictogram of a very tall man pointing to a series of stars. The two archaeologists are clearly very excited and believe the man depicted is an extra-terrestrial and that the image is intended as an invitation to the humans to come and find them. 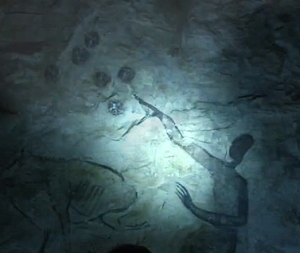 After watching the whole movie, I doubted that premise. Was the star map really an invitation? If so, what was the point of it if the engineers wanted to destroy Earth?

Why did they invite the humans to come visit, if they wanted to destroy us?

Sorry, I don't have the link, but I read an interview with Ridley Scott where he states clearly that no where in the film does it actually say the tall figures in the drawings are engineers. He neither confirms or denies who they might be.

There is also a key moment where David is talking to one of the crew members, that the planet they are landing on "might be" the home of the engineers. David responds by saying something like "assuming your thesis is correct". David makes it very clear that the star they are traveling to is based upon a thesis that isn't proven.

Ridley Scott explains that the solar system they visit has several possible planets and that the crew picked that one moon cause it seemed logical. Ridley also explained that the drawings could have been interpreted as a warning rather then an invitation. I think he wanted the drawing to be thought provoking rather then clearly defined.

Why did they invite the humans to come visit, if they wanted to destroy us?

At the start of the film we see an Engineer sacrifice himself using similar technology to the black goo in order to seed a world (possibly Earth) with his DNA. I think that indicates that the Engineers have uses for the technology beyond destruction and that they're quite prepared to destroy themselves in the process of using it.

At the beginning when Holloway and Shaw are showing the matching cave paintings they vary greatly in date:

Two are fairly recent: Mayan (620AD) and Hawaiian (680AD). This is interesting because earlier on they found the that the calamity that befell the Engineers on LV-223 happened about 2000 years ago - if Prometheus happens in 2093 the implication is that some of the cave paintings happened after the Engineers set up whatever they were doing with the black goo on LV-223.

I think the black goo is not intended to destroy humanity as such, though that may well be a side effect. I think (and this is pure conjecture) that, to the Engineers, whatever the black goo is supposed to do is some kind of step forward. If the painting are an invitation then it's to come and become something else.

I think the Engineers left the map in hopes that the humans would eventually get smart enough to figure it out and come calling.

The humans were just another experiment for the Engineers and they would eventually pull the plug on the experiment. Although, no reason is given as to why humans would need to be destroyed and not just left alone to destroy themselves.

In short, the purpose of the star map is to determine whether humans are smart enough to figure it out and come calling.

The simple question, easily answered was, "Why go there to destroy them, if we can lead them here, corrupt them, and have that corruption taken back to the original planet?"

This is exactly why I laugh at dramas where commandos take over a municipal water system - Why? Best way to infiltrate and sicken a population? Create a cookie and give it out for free as a "Sample" of a new product. They'll be clamoring all over themselves.

Have your victims come to you. No muss, no bullets, no training exercises. Easy peasy.

A theory that I read in the Prometheus forums is that the paintings are not invitations, but merely pattern representations drawn by humans throughout the years that are encoded in our DNA (DNA shared with the Engineers).

I think it is somewhat absurd to accept the suggestion that somehow the writing is infallible and that there is an explanation for everything in a movie like this. To be more specific: firstly, the proposition given is that the "star map" is a way to guide humans to something "more," as it is an a recurring piece of evidence present in several ancient civilizations. Then, when the "scientists" follow this map, it ends up leading to a planet that is purportedly used for the manufacturing of weapons of mass destruction.

Sure, you could argue that the character who suggested this was incorrect, but it still leaves the question as to what the purpose of the "map" was altogether, if nothing more than a plot device to drive the story.