There is what appears to be source code depicted on Nedry's work station before he shuts down the gates, I wanted to know if this belongs to real programming language/s? (so we can all laugh/cry at how deprecated it is...)

A quick Google found an out-of-stack question was already asked but no answers yet. 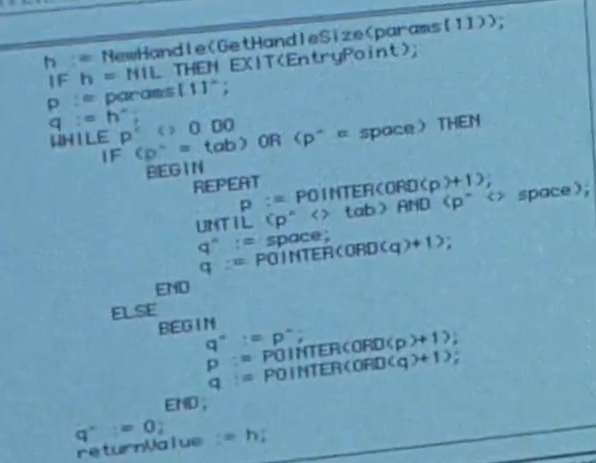 (Note: images I could produce given a 1080p resolution edition of Jurassic Park)

The window on the left looks like Object Pascal code for Classic Mac OS judging by:

The routine on the screen takes a string input and produces as output a copy of that string with consecutive tabs and/or spaces replaced with a single space.

The window on the right appears to be some kind of shell script for source code version control. Possibly written in an early version of AppleScript as it doesn't quite look like a UNIX sh-style syntax. http://www.joecullin.com/site/2012/01/jurassic-park-source-code/ claims to have found the full file (with a description and Apple copyright notice) based on matching text. The path where the file was found (... MPW/Examples/Examples/CheckOutActive.txt) is also associated with Macintosh Programmer's Workshop.

The window at the bottom is a script for converting Apple PICT format pictures to resources, as would be used in a software build process.

This is, of course, all very generic and not specific to amusement park/zoo control.

As the other machines portrayed in the movie are Unix systems (SGI IRIX), it is questionable that this machine was even being used for actual development. Development for the IRIX machines would have been done on the IRIX machines, probably in C, using the Workshop GUI or command-line tools.

This looks like Delphi (or a pascal derivative) because of the semi colons at the end of the lines and also the := assignment operator. Delphi is also a RAD language which would be good for building out their screens.

Edit: Based on the related question of the system running unix, Delphi can be done on *nix

Note: Object Pascal (Delphi) is generally not case sensitive. My examples are in lowercase while the screen shot is uppercase.

Here is a basic if/else I found from here

if you compare the similarities to what you can see in the image, it's a match. The if [predicates] then begin ... end matches

Same for the while [condition] do example from here

Also looking at the comment blocks using *, you can match them to this (found here)

Examining the right file more the comments are # not * and it also looks like a build script or some kind of shell script, especially if you read the comments.

3
Sign language used in The Tingler - Is it real?
4
Does Chewbacca have a real language?
2
What is the programming language seen in The Martian?