Why is the ring of debris (accretion disk) surrounding Gargantua shaped the way it is? 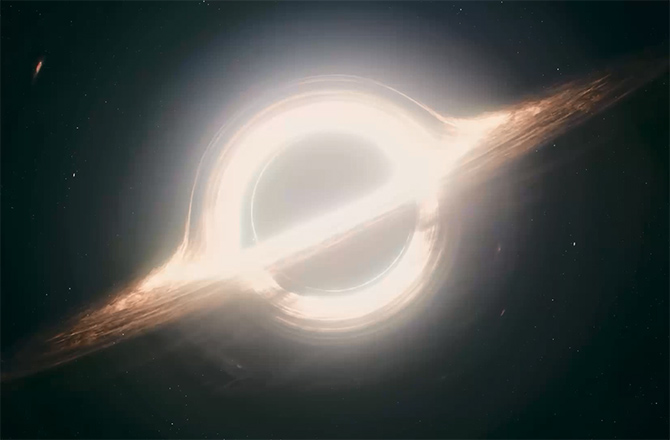 Why does the depiction of the black hole Gargantua in Interstellar look the way it does? I understand why the ring is bright (due to the friction) but why does it loop around what seems to be two perpendicular directions?

The appearance of the black hole in Interstellar was not created arbitrarily. It was actually modeled using the real relativistic equations describing the path of light in the gravitational field of a super-massive black hole spinning at near the speed of light. As a result, it may be the most accurate depiction we have to date of what such an object might look like. Astrophysicist and gravity expert Kip Thorne collaborated with the visual effects team to produce new software specifically to model the equations and render the black hole. The appearance was initially somewhat unexpected, but Kip Thorne realized "Why, of course. That's what it would do."

I don't pretend to be an astrophysicist, but on a basic level, here's what's happening: The glowing accretion disk of plasma remains in a single plane as expected (there's no perpendicular ring), but some of the light from the back side of the disk is warped by the intense gravitational field, over the top and bottom of the black hole. Thus in the region just outside the black hole, you are actually seeing around to the back side of it.

Indeed, the discoveries made during the rendering process has even led (or will lead) to the publication of several scientific articles on gravitational lensing.

There's more detail, including a video with Kip Thorne describing the effect, here:

Filmmakers often use a technique called ray tracing to render light and reflections in images. “But ray-tracing software makes the generally reasonable assumption that light is traveling along straight paths,” says Eugénie von Tunzelmann, a CG supervisor at Double Negative. This was a whole other kind of physics. “We had to write a completely new renderer,” she says.

Von Tunzelmann tried a tricky demo. She generated a flat, multicolored ring—a stand-in for the accretion disk—and positioned it around their spinning black hole. Something very, very weird happened. “We found that warping space around the black hole also warps the accretion disk,” Franklin says. “So rather than looking like Saturn's rings around a black sphere, the light creates this extraordinary halo.”

That's what led Thorne to his “why, of course” moment when he first saw the final effect. The Double Negative team thought it must be a bug in the renderer. But Thorne realized that they had correctly modeled a phenomenon inherent in the math he'd supplied.

26
Why was the wormhole in Interstellar placed near Saturn?
4
Why aren't the planets orbiting Gargantua sucked in?
9
References to Voyager 1 / Cassini photographs?

4
Why aren't the planets orbiting Gargantua sucked in?
5
Why is the Endurance still in "orbit"?
3
Why didn't endurance burn from the heat generated by the accretion disk around Gargantua?