Did Batman break his one rule?

In the final scene of The Dark Knight, we see Batman go on a final confrontation with the corrupted Dent.

Dent, hell bent on making Batman and Gordon pay for Rachel's death, flips his trademark coin to decide the fate of the 3, Gordon being replaced with his son. 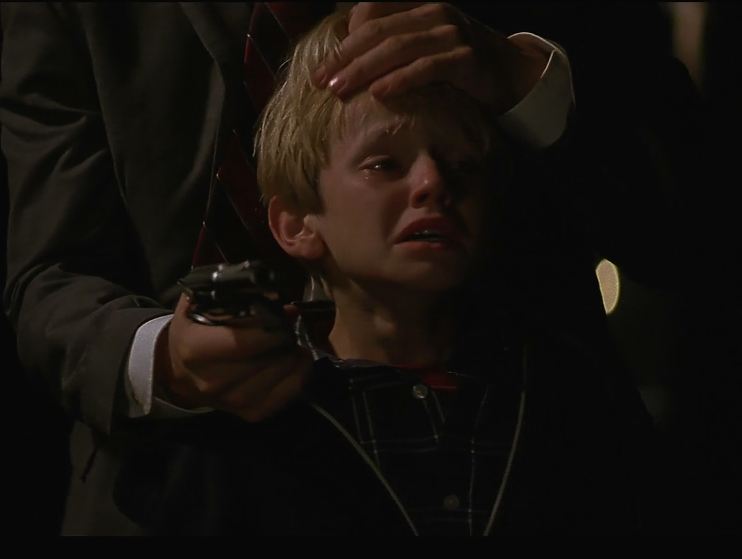 Batman's fate turns out poor, while Dent escapes, however, Gordon's fate seemingly is decided as poor and Dent prepares to shoot the boy. In a quick act, Batman lunges at Dent and both of them fall a few stories down the blown up building.

The Joker: Oh, you. You just couldn't let me go, could you? This is what happens when an unstoppable force meets an immovable object. You truly are incorruptible, aren't you? You won't kill me out of some misplaced sense of self-righteousness. And I won't kill you because you're just too much fun. I think you and I are destined to do this forever.

We have confirmation from Nolan that these events killed Harvey Dent and actually set into motion the events of The Dark Knight Rises.

Does this mean the Joker actually won, and caused Batman to break his one rule?

The Joker: You have these rules, and you think they'll save you.

Batman: I have one rule.

The Joker: Oh, then that's the rule you'll have to break to know the truth.

Anyone that knows Batman mythos knows that Batman's one rule is never kill.

A similar thing happens at the end of Batman Begins. While Batman and Ra's are duking it out on the train, it turns out to be just a distraction while Gordon derails it. Batman then claims to Ra's:

Ra's al Ghul: Have you finally learned to do what is necessary?

Bruce Wayne: I won't kill you, but I don't have to save you.

Do these two events actually count as Batman breaking his One Rule? Or are they actually excusable occurrences due to the nature of events.

Batman has more than one rule, but the one line that he refuses to cross - the one thing that would turn him from a crusader into a villain - is that he does not kill. Only taking Christopher Nolan's Batman into consideration then yes, he did break this rule by directly causing the fall that accidentally killed Harvey Dent.

Let's look at the scene:

Batman is shot, Dent is safe, and the boy's fate is undecided, but Batman can't let a coin determine that fate. He lunges at Dent and the boy and all three go over the edge. Despite his armor, Batman is injured and not at full strength. He is only able to save the boy before he himself falls after Dent. Crashing through more debris than Dent (who was pushed far enough out that he was clear (and who may have survived had he not been in such a badly burned condition)) Batman gets more injured on the way down and lands near Dent.

Later on when talking to Gordon, Batman says:

"You either die a hero or live long enough to see yourself become the villain. I can do those things, because I'm not a hero, like Dent. I killed those people. That's what I can be." ----- "I'm whatever Gotham needs me to be."

It's a great and powerful scene, but in its essence, it's one man (Batman) pushing another man (Dent) off a building and killing him (while saving an innocent boy), then taking the blame for not only Dent's death but the deaths caused by Dent as well. Batman is not just telling Gordon that he killed Dent, he is saying that he killed those people too. Batman feels directly responsible for their deaths and in Harvey's case, he is directly responsible.

This is the true genius of Nolan's Batman; he's not only real and plausible, he is constantly trying to figure out what he's doing, why is he doing it, and has he gone to far? Nolan made Batman break his most important rule.

A lot of fans don't want to admit that Batman killed. An accidental killing doesn't count as breaking his rule they say, but to Batman it does count. It will haunt him. The deaths Two-Face caused will haunt him. He takes the blame for everything that happened. He pushed Two-Face off of a building and Two-Face died. The line has been crossed. How will Batman deal with that? How will he deal with being a criminal? The next movie will definitely deal with this but it is a huge step for Batman.

Nolan has created a realistic Batman. In Batman Begins we got to see what makes a man become a Batman. What training, what psychological problems, what Gotham's corruption had to do with it. When fighting Ra's al Ghul, we started to see a bending of the rule not to kill. Leaving Ra's al Ghul on the train was not killing in Batman's mind because Ra's al Ghul had survived a seemingly unsurvivable situation before, plus he had planned meticulously. If Batman could survive it, then he assumed Ra's al Ghul could as well.

At the start of The Dark Knight we start to encounter a basic problem with his rule: if Batman doesn't kill, why do criminals need to fear him? By the end of the movie Batman has killed and has taken the blame for more killings. This not only adds to the myth of the Batman but it directly affects his mental state. Throughout The Dark Knight we see him wrestling with how far he should push himself, what is his limit, what keeps him from being the Joker?

Then he breaks his most important rule and it seems to define him more. Did he plan to kill Two-Face? No. Did he directly cause his death? Yes! He did it in the only allowable way, to protect the innocent, and he did so by accident, but he still killed and still broke his rule.

Now we have a whole new Batman going into The Dark Knight Rises. One who has killed. One who has become a villain. Yet he is more sure of himself and what he stands for than ever before.

I would like to say he didn't break his rule, but he actually did. He didn't save Ras, which is fair enough, he saved a young boy by killing Dent, unintentionally (though he may have died from infection eventually anyway), both are questionable. What most people are forgetting is that in the first movie, when Bruce claims to not be an executioner, lets one man live (a thief) by causing an explosion, killing most of Ras Al Gul's men, and also killing the guy pretending to be Ras. The building exploded because of Bruce, we saw people die, so he technically broke his rule before putting on the mask.

All that being said and done, if i was in his shoes, i wouldn't have changed anything he did, and deem them ok.

If we assume Batman's rule to be "Don't kill", it's a bit ambiguous, and very limiting. Instead, we should assume the rule is "Don't Murder". This is more in line with his actions.

He didn't murder Dent. He didn't intentionally cause his life to end. Dent died accidentally, as a byproduct of trying to stop Dent from murdering a child. While risky, there was a chance Dent would have lived. It's manslaughter at worst, more like a justifiable homicide. It's very close to suicide by cop. By the first interpretation or the second, he didn't kill Dent.

Ra's is harder to justify. Nolan Batman is grittier than the typical Batman characterization. Batman would normally always attempt to save someone about to die, even if it's the villain. Allowing someone to die through inaction would violate "Don't Kill", but not "Don't Murder".

In other Batman characterizations, Batman has been seen killing henchmen through inaction or indirect action. These henchmen are always attempting to kill Batman or civilians. Notably, henchmen thrown off fatal heights, or causing them to fumble explosives leading to walls painted red. As the saying goes, it's not the fall that kills you, it's the sudden stop. Batman causes the fall, not the sudden stop.

I think the Joker's plan does turn out, but not in Batman killing Harvey; but Rachel. Joker says "killing is making a choice. Choosing one life over another." he tells Batman that his (Batman's) rules won't save him. The Joker says Batman's one rule will have to be broken; he'll have to play the Joker's "little game". The Joker tricked Batman into inadvertently killing Rachel by accidentally choosing Dent's life over Rachel's.

In the First movie, Batman doesn't break his rule. He explains: "I won't kill you, but that doesn't mean I have to save you." He didn't, technically, kill him.
The Dark Knight, however, is a different matter. Yes, in this film, he does break his rule. That's the thing about Dark Knight: It's about Batman failing. That's why The Dark Knight Rises is called what it is; because Rises is about the consequences of breaking that rule and his quest to rise above it.

Not the answer you're looking for? Browse other questions tagged character analysis the-dark-knight batman-begins .

31
Does Christopher Nolan's Batman have an overarching theme?
54
Is Batman Begins based on any Batman comic or was it entirely written from scratch?
8
Batman vs the truck driver, please explain
1
Batman's Rule: Is it thrown out the window in the new DC Universe?
1
Is it really clear what happened to Two-Face?

11
Why would Batman discard his disruptor?
22
Why would Dent's convictions be overturned?
6
How did Batman survive after the fall trying to save Rachel?
69
Why did the Joker take the risk of placing a gun in Harvey Dent's hand?
5
Why couldn't Harvey's killings be pinned on the Joker?
7
How did Joker survive the blast in the jail in The Dark Knight?
41
Who was the fifth one that was killed by Harvey Dent in The Dark Knight?
9
In The Dark Knight, does the Joker know who Batman is?
6
Do the previous Batman movies adhere to Batman's rules?