What is the meaning of the emphasis on Mr Darcy's hands?

In Joe Wright's Pride and Prejudice (2005), Mr Darcy's (Matthew Macfadyen) hand is shown in close up several times, such as when he helps Elizabeth (Keira Knightley) into the carriage, after he sees Elizabeth at Pemberly.

IMDB trivia claims this is because

The ultimate goal of the Bennet sisters' lives is a wealthy man's hand in marriage, and a foreshadowing of the fact that Elizabeth does in fact eventually win Darcy's hand.

I can't find anything to support this trivia, and I don't really buy that because Elizabeth never tries to win Mr Darcy's hand; on the contrary, he tries to win hers. Are there any alternative theories or explanations?

The close up of hands highlighted the amount of personal contact they had with one another and how exhilarating and attractive both Elizabeth and Mr. Darcy found it.

Pride and Prejudice took place in the Georgian era and in both it and the following Victoria era, contact between gentleman and ladies would have been much, much more minimal than what we take as commonplace today. In addition to this, women would have usually been wearing evening gloves, or long sleeves, reducing the amount of skin being exposed. Consider these photos, from the phenomenal 1995 adaption: 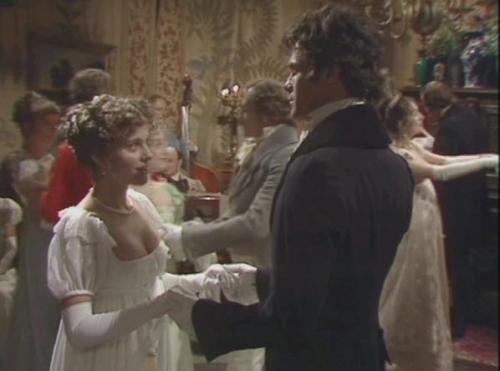 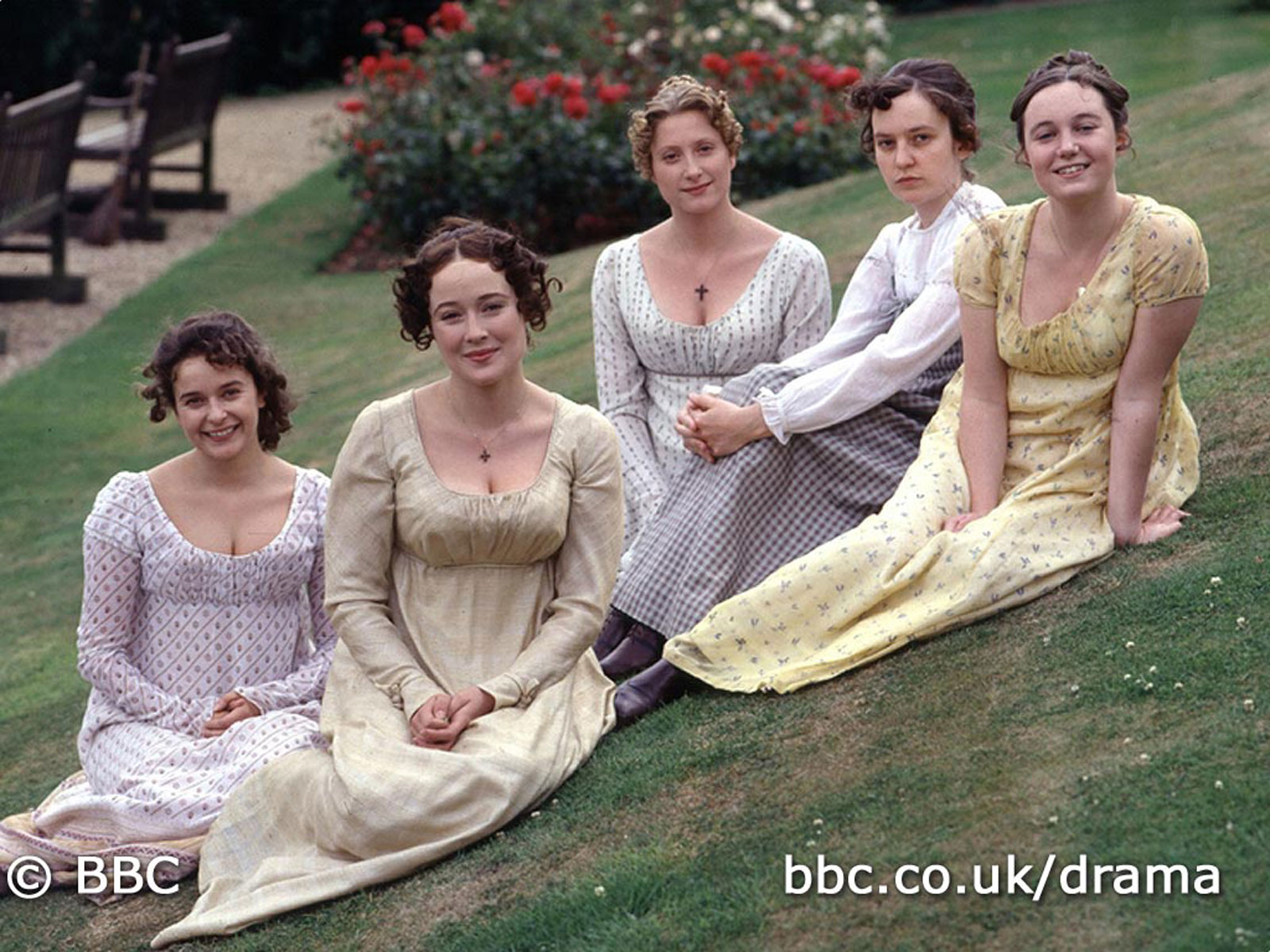 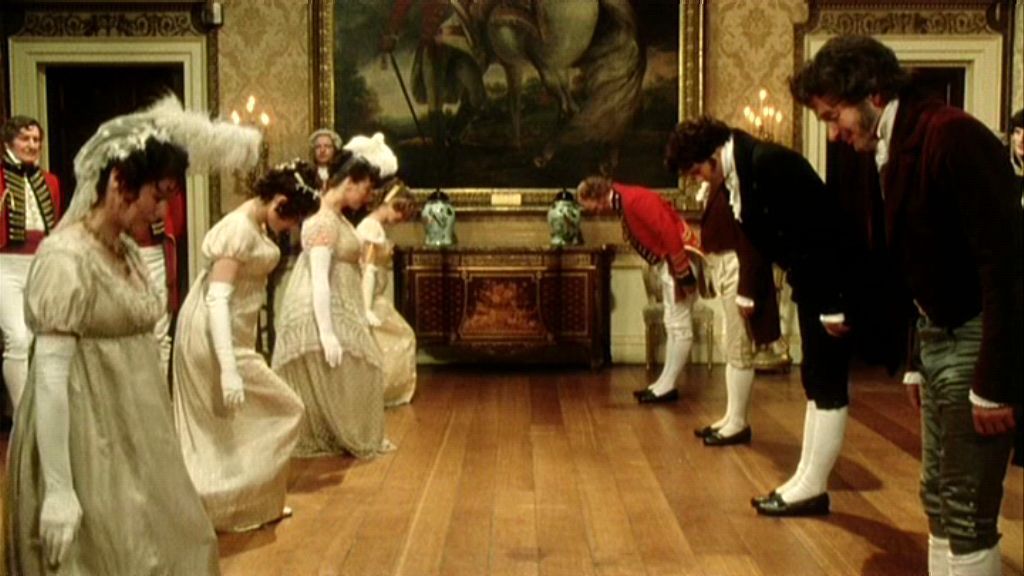 The only time we see characters without their gloves on, for example, when dancing, is because Jane Austen is trying to paint them as lacking etiquette. This is an incredibly important part of the novel. The scenes that are now considered to be amusing and witty, showing the arguments among the family both publicly and privately, would have been quite serious in Jane Austen's day.

In the 2005 adaptation of your question, the film makers relax this etiquette and so we have scenes like these: 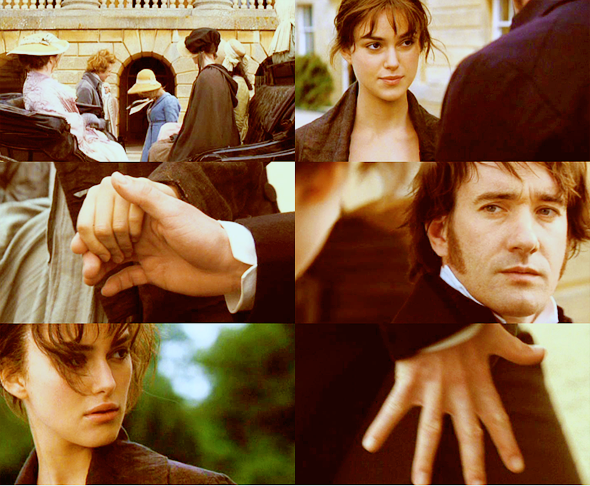 This physical contact is presented as being new, exhilarating and unusual for both of them and is used as a device to increase the romantic tension between them. The lingering shot, for example, of Mr. Darcy's hand in the picture above is intended to show just how moved he is by being able to touch her hand.

Whilst this is out of tune with the etiquette of the book, it worked as quite a fitting way to show their attraction in the 2005 film.

I agree that that feels very incomplete, and I think it is an oversimplification of the deeper meanings and metaphorical relationships of their hands, and of the connections that are being made between the characters.

Yes, the "hand" is "won" in marriage, but even more deeply rooted to the metaphorical aspect of their hands are the notions of labour, wealth, and status. The Victorian era satirized and romanticized by Jane Austen's work is most notably represented in films as an almost ubiquitously non-labourious attainment of wealth. A large part of the plot of "Pride and Prejudice" is that Elizabeth sees Mr. Darcy as an abstracted aristocrat, consumed by status and wealth, unaware of the reality of emotionality and personhood, though he is not. While she feels wrapped up in her friends and family, she has these prejudices against him initially and sees him as uncaring and unaware. They have their flirtatious but mostly cantankerous encounter revealing this to one another -- and stoking their interest in one another -- in the dance scene.

In a kind of world where status seems simply to be had, and not earned, their hands play a kind of likewise-abstracted role. The hands of the aristocrats aren't used for toiling in fields or working in crafts and construction, even when dancing they barely make contact -- they either lightly hold one another by their fingers or simply put their hands near, but not really touching, their bodies.

It is also a very common literary trope to engage a comparison of the aristocracy as abstracted from the plebes/peasantry by the softness of their hands, never having "seen a day's work". In this way, the dance scene has the subtle undertones of their physical connection, finally putting their hands to work, and undertaking a more corporeal and physical reality, a "truer" kind of life, as opposed to the abstracted class-based, wealth-and-status-obsessed aristocracy.

All the brief moments they share, where they touch hands, are in fact deeply intimate moments for the both of them, in secret. Until they are on the hill in the rain together, they don't truly reveal their feelings and adorations towards each other. Instead they both essentially suffer silently through their prides and prejudices against one another, never making that true connection sooner. Having their hands connect, and focusing on their hands shows that there is this natural, underlying, human, physical, corporeal, capital-T Truth to the connection between them. It's part of the visual language of the film. And that connection between them is there and known and immutable and undeniable, and yet they won't allow themselves to step outside their self-made rituals and the "airs" about themselves, so as to actually see it, and recognize it, and embrace it.

When they do finally admit it and finally embrace, it is again a romanticization and satire of the Victorian kind of "prudishness" wherein the ultimate, steamy, romantic climax of the film is just a kiss. Instead of what might be more honest and carnal and corporeal and true to human form, like wildly impassioned love-making (as is so often otherwise detailed in film and literature), the representation here is a kind of hopefulness towards romance and "classy" (pun-intended) love amongst such snobbish and status-obsessed societies. Romance, an admittance of physical and psychological and emotional and physiological passions, is "simply not done" in such "polite society".

If we recognize that besides our rationale, our language(s), and our capacity for love and compassion (sympathy and empathy), our humanity is very much linked, corporeally, to our ability to construct and work with tools. Sentience and intelligence in other animals is often judged by their ability to problem solve by working with tools. Philosophically this is also often seen as an abstraction of our actionable selves extended into the tool. We can philosophically see our selves navigating the world via our abilities with our tools (e.g., our notion of distances changes depending on whether or not we have access to a car, what's "too far" when walking may be trivial when driving, so our view of the size of the world shrinks and grows based on tools of transportation). For us, for the way we are neurophysiologically and culturally and societally, our relationship to our tools -- to our world -- is through touch, through our hands, this is how we feel most connected.

This is because our hands can build and manipulate, they can create, so when we reach out and touch our world, or the people and things in it, with our hands, we're abstractly making that connection that we're engaging with something malleable, something we may be able to change, something we can work with. Ideally, use of a tool is not only about moving forward to solve a problem, but an extension of ourselves and a means to providing feedback. Efficient problem solving is often about trial and error, learning from mistakes. This extends also to ideal respectful and romantic relationships. Not being a doormat, but also not being overbearing and dominant. A truly loving relationship is based on feedback and communication, it is a shared dance.

While they are not willing, amidst their upbringings and the expectations of their society, to "succumb" to their passions and truly engage one another as corporeal and impassioned persons in love, they can actually rebel against the aristocratic abstractions and put their hands "to work" by bridging the gap between them, and actually building and crafting a relationship that their minds (their prides and prejudices) would otherwise not allow. They don't toil in farming and they don't craft homes or furnishings, but they can break out of the confines the abstracted and elitist society to construct a loving relationship.

Before their ultimate revelation to one another in the rain, all they can, do, and need to share is in their hands. I think this is the truer metaphorical relationship of the hands, and why amongst all the other beauty of the film, they do tend to focus so consistently and intently on their hands.

I believe Joe Wright meant to use the hand to symbolize Mr. Darcy and the lips to symbolize Elizabeth Bennett.

The first time that Elizabeth touches her lips is when she speaks to her aunt and uncle in a pub, by which time she is clearly unequivocally in love with Mr. Darcy, and wants to unite with him, which she expresses through touching her hands to her lips, wishing that it were his hand and not her's that she was kissing.

And then there is the proposal scene between Darcy and Elizabeth, which culminates in her warm lips kissing his 'cold' hand, and they are symbolically united.

After the proposal scene, there is the scene where Elizabeth speaks to her father in order to gain his consent, and we see her touching her hand to her lips as if she is rejoicing in their unification, and this gesture is mirrored by her father, who realizes that a unification of love has occurred, and his acceptance is expressed through his mirroring.

Not the answer you're looking for? Browse other questions tagged analysis pride-and-prejudice .