In the Star Wars franchise what causes the Sith to always have red light sabres?

I understand visually that this is a great way to distinguish the good guys from the bad guys, but what in the vast Star Wars lore causes the Sith to almost exclusively use red light sabres?

I am assuming Grievous was not a Sith because he can't use the force (is this correct?). Notably though, he doesn't have red sabres, so we can ignore him for now I suppose.

If I may quote wholesale from user @Thaddeus' excellent answer

Though synthetic crystals were ordinarily unsuitable for use in lightsabers, the Sith discovered that they could create synth-crystals that were energized, magnetized, and modified with the power of the dark side of the Force in special furnaces, causing the crystal to glow in harmonic vibration.

As a result of their artificial origins, synthetic crystals created more powerful lightsaber blades and could be more easily augmented. Also, their common usage by Sith and other Darksiders after this discovery caused synthetic crystals to become something of a staple among such groups, and their use among Jedi was strongly discouraged.

The red-hued lightsaber blades generated by such crystals were often nicknamed "bloodshine blades". However, synth-crystals could be made in any color, requiring only slight adjustments of the creation process and special manipulations through the Force during the forging. --

This is never addressed directly in the original films - only in the lore that followed (and in particular the novels). There are ultimately three reasons why red lightsabers are predominantly used by the Sith:

@Richard's answer is of course correct and links to a detailed in universe explanation. Whilst I know you say you understand that the colour red distinguishes good from bad, I thought I would explore why that is in more detail as the in universe explanation has been tackled. Then, I'll look at behind the scenes of the Star Wars Universe and why the red light saber came to be used.

The colour red and its background of danger

Firstly, consider the trope of good colours versus bad colours. White and black have consistently been used to portray good and bad in films. A great example would be in Westerns, where the allegiance of a character could often be determined by their clothing.

Similarly, red and blue have often be presented as opposites. TV Tropes argue this could date all the way back to the War of Independence and the Americans (blue) versus the British (red). Even going beyond this (admittedly) controversial interpretation, red has frequently been seen as a "danger" colour. Consider a standard stop sign: 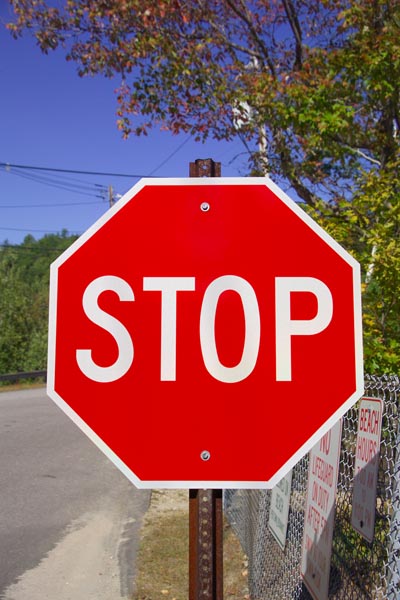 It is red, designed to gain attention and highlight danger. It's the colour of fire, something that humans have been wary of and respected for a long time. It frequently is associated with the Devil, and Hell, in religious ideologies. It has associations with power, for example consider the power red tie look*: 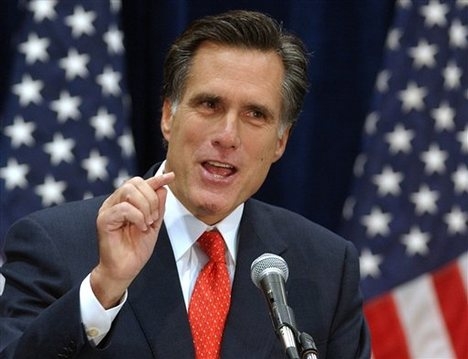 Whilst there is much research online about all this, to choose one example The Huffington Post released an article all about why red still makes us mad, concluding:

Red color did not just elicit a stronger physical reaction, but also a faster and more consistently-strong reaction. This phenomenon is similar to wild animal behavior where red may be seen as a color of threat, inducing a rapid preparation for defense or flight.

How the red lightsaber came to be used in Star Wars

To quote from the Wiki on sith lightsabers:

Technically, the first Sith lightsaber designed was Darth Vader's. However, there were no early plans to make Vader's weapon distinct from the other lightsabers depicted, beyond the black styling on the hilt itself.

The original lightsaber effect was provided by the reflective, spinning dowel that made up the blade, which appeared to glow to the camera. However, Lucas was unsatisfied with these early effects, and had the glows further augmented by rotoscoped animation. During this phase, it was decided to make the lightsabers have different color blades to further differentiate them, and Vader was given a red blade.

This is important to note as, to paraphrase from the wiki, it wasn't until Shadows of the Empire was released that any mention of internal crystals affecting light saber color was introduced.

*Yes, I'm aware I linked to Mitt Romney in an answer about the Sith. No, this was not indicative of any political views!

Just with regards to General Grievous, no he was not a Jedi/Sith.

In the recant Marvel comic, Star Wars: Darth Vader: Dark Lord of the Sith, the in-universe reason about "how" the lightsaber's kyber crystal becomes "red" is revealed, as part of Anakin's ongoing transition into Darth Vader post Revenge of the Sith. 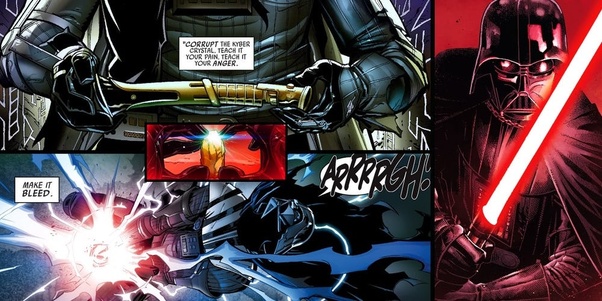 After an attempt on the Emperor's life, Darth Sidious forces Vader into an ultimatum: Become a Dark Lord of the Sith or die! Vader chooses to continue on and his first task is hunt down one of the surviving Jedi, kill him, take the cyber krystal from his lightsaber, and then BLEED the crystal so that it turns red.

This process was accomplished by the individual pouring rage, hate, and pain into the crystal via the Force until the crystal turned crimson, resulting in the bloodshine lightsabers associated almost exclusively with dark side adepts. Since the crystals were inherently aligned with the light side of the Force, they attempted to resist the forced corruption; when Darth Vader first attempted to bleed the green crystal within Jedi Master Kirak Infil'a's lightsaber, he experienced intense light side Force visions which nearly drove him insane.4 Vader later traveled to Galen Erso's Office on Coruscant, where he found a stash of kyber crystals left behind by Galen Walton Erso, and bled them.

While this is not always the Sith's exact practice, the method is about pouring rage and hate into the crystal by using the Force and therefor it's literary about a process of corruption of the light side of the force.

8
What is the in-universe significance of different colours of lightsabers in Star Wars?