Why was Bill Turner called Bootstrap?

In the Pirates of the Caribbean, why Bill Turner was called "Bootstrap"? 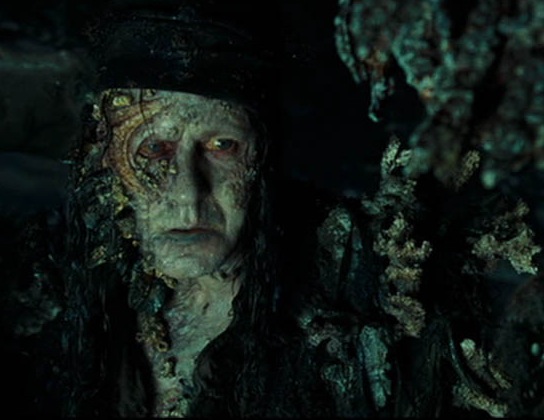 character pirates-of-the-caribbean
Share
Improve this question
edited May 1 '15 at 12:57

In the first Pirates film, The Curse of the Black Pearl, Jack Sparrow and Will discuss Bootstrap Bill Turner:

Bootstrap Bill did come to his demise by being tied to a cannon by his bootstraps and thrown overboard, but the conversation between Jack Sparrow and Will Turner above strongly implies that the manner of his death was because of his nickname, rather than what led to his nickname.

In other words, he was called Bootstrap Bill before that incident.

So where did Bootstrap actually come from? We don't know. We have never been told.

As described in the Pirates of the Caribbean wiki, at the start of William Turner Sr.'s career, he was simply Billy Turner. Since Billy is not a 'fit name for a pirate', he was named Bloody Bill Turner.

It wasn't until he assisted Barbossa in the mutiny and then turned on the mutineers by sending his son a single piece of eight, thus ensuring their everlasting torment by curse, that Barbossa has his crew tie Bloody Bill to a cannon by his bootstraps and tossed him overboard; thus changing his non-de-plume to Bootstrap Bill Turner.

It's because of the way he died.

At the very least, it is used in the story "just because" in order to remind us of the way he died.

Pintel: So, what Barbossa did is, he tied a cannon to Bootstrap's bootstraps.

Pintel: And the last we saw of ol' Bill Turner, he was sinkin' into the crushing black oblivion of Davy Jones' Locker. Course, it was only after that we learned we needed his blood to lift the curse.

William Turner: You knew my father.

Jack Sparrow: I knew him. Probably one of the few who knew him as William Turner. Everyone else just called him "Bootstrap" or "Bootstrap Bill".

Jack Sparrow: Good man, good pirate. I swear you look just like him.

may suggest that he was known as "Bootstrap" before his death, but it also just reinforces the idea that Jack was one of the few who respected Will Turner and that Will Turner was the only one aboard the Black Pearl who did not agree with the plan to mutiny Jack. There is no answer for this apparent inconsistency.

I'm of the opinion that bootstrap got his name due to being first mate and old maritime humor, as in "he is that far up the captain's behind ,all you can see is his bootstraps". That would explain why Jack doesn't call him that and the childish sniggering when it's mentioned

Not the answer you're looking for? Browse other questions tagged character pirates-of-the-caribbean .

5
Did Will forget who killed his father?
5
How come Bootstrap Turner (Bill Turner) ends up on the Davy Jones ship?
4
Why was Mr.Gibbs working on Royal ship?
33
Why is Turner's blood necessary to break the Aztec gold curse?
4
Why did Jack Sparrow let Will Turner escape?
43
How did Jack get to the island, and how did he become so important so quickly?
3
How did Sparrow know Turner was necessary?
2
Why does Bootstrap Bill forget talking to Elizabeth Swan in Pirates of the Caribbean: At the World's End?