Why does Milton Arbogast exit his car by sliding across to the passenger side and getting out through the right hand door?

In Psycho (the original), Milton Arbogast exits his car by sliding across to the passenger side and getting out through the right hand door. Why? I am guessing that either the car was not a complete unit, or that the film crew was too close to the car for him to exit the normal way.

This actually happens everytime somebody exits the car in the film (and in quite a few other films from the era too).

There are two possible reasons for this:

Firstly, Hitchcock did love his filming and it's highly possible he felt having the people exit via the passenger door gave him a better shot. In fact, some basic googling shows a general consensus that Hitchcock preferred to continue a shot without moving the camera to either follow the actor or to have the actor walk between the camera and the car (although I can't find an interview with Hitchcock to corroborate this).

However, secondly and probably more importantly, this action used to be what was recommended in the 1960s. I remember discussing it with a friend of my father's. His car, like the car in the film, had bench seats like this: 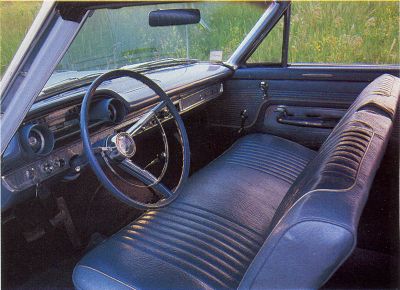 It was considered safer when parking to shuffle over to the passenger door so you were stepping out onto the pavement, as opposed to using the driver door and exiting into traffic. Nowadays, where the bench seat is gone and two distinct seats are in place, it's not as comfortable or convenient to do this.

I think the smoothness and continuity of filming are good reasons. Another possibility is he didn't want to step onto the muddy bank or grass, and scuff his shoes and suit up; particularly, as he wanted to appear as respectable, as possible, when approaching Mrs Bates.

Hitch could have the car enter from the left instead of the right. This would put the driver's side of the car closest to the motel, avoiding the awkward move Arbogast made. This would achieve a smoother and a more natural exit from the car. But Hitchcock had his reason for the "Fanny Slide". He always had an eye for "cinema" detail. Visualize both exits ,from the right and left. Which one clearly shows the actors face when he first comes on screen?

That's how cars were. Old cars from 30s-50s didn't have a lock on drivers side. If driver was alone they'd slide over on the bench seat and exit passenger side. If he had a passenger, he'd open door for his wife most likely, and she'd unlock his side manually. I have a 1950 Ford pickup and it has a lock only on the passenger side.

Not the answer you're looking for? Browse other questions tagged plot-explanation psycho .

7
Why doesn't Sam use his ability to move things to open the door?
5
Why does the pilot unbuckle his harness?
24
In 'Sicario', what was the purpose of raiding the tunnel?
3
Why does Sophie wear the jacket inside out?
37
Why does Cersei need to repay the Iron Bank right now?
2
Who shot Lt. Smith (Wesley Snipes) in the back?
2
Why does Jarda attack Jason in The Bourne Supremacy after telling him where his car keys are and even suggesting how to escape?
5
Why didn't Viggo kill John after he passed out from getting hit by the car?
2
How does Colonel Dugan have the police and school on his side?