Strange movie with a hand going through a meat grinder, but it didn't actually happen [closed]

My uncle once rented a strange movie for my cousin and me to watch. It was entirely not appropriate for our age, and we talk to this day about how weird it was. We saw it probably 20-25 years ago, and I don't think it was new at the time (although I may be wrong about that).

Here's the bits I can remember: A couple goes is going to visit a man's father. On their way there they are involved in a car accident (they swerve to avoid someone in the road, I believe). The wife wakes up at the father's house, but the husband is nowhere to be found. The father's house is large .

As the movie progresses, it is revealed that the father is going to try and have a child with the wife.

At the very end, the wife wakes up, revealing it may have been a dream all along.

Found it: This is the version of The House of Usher from 1989 with Oliver Reed and Donald Pleasence. From an online synopsis:

Molly McNulty accompanies her boyfriend Ryan Usher to England to visit his family estate. As they drive there, two ghostly children appear on the road, causing them to crash. With Ryan suffering from a head wound, Molly goes on alone to the Usher house. She is welcomed in and meets Ryan’s uncle Roderick who suffers from a crippling hyper-acuteness of the senses. Molly then discovers that Roderick has lied about Ryan being safe in hospital and that he is in fact dead. She soon realises that Roderick has made her prisoner in the house with the intent of impregnating her in order to carry on the Usher line.

You got almost everything right: A woman's hand is fed into a meat grinder, but it doesn't really happen; The uncle's butler tortures the doctor by stripping him naked, strapping him to a table and putting a cage with a starved rat on his crotch; and in the end, the mansion burns down, Molly rescues her boyfriend from a coffin and the uncle's face is burned by a lamp. Well remembered. The entire movie is currently available on Youtube; Here's the poster: 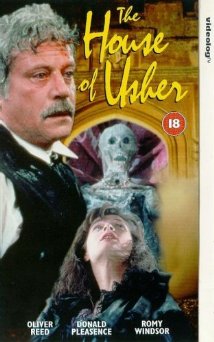