In the film 'Gothika' (which takes place in circa 2003), the principal actress is held in a prison for the criminally insane. The door to her cell is a fortified glass of some sort, and does not require a key to open.

Instead, it has a vault-type of handle. When the handle is rotated clockwise, cables move pins which allow the door to be pushed open. The cell door is secured by rotating the handle in the opposite direction.

All the other areas in the prison use conventional key-lock technology and in fact the principal actress steals a large set of keys to open the various doors in her 'dramatic' escape scene.

In comparison, Hannibal Lector's cell had a Plexiglas front, but the actual door in the rear of the cell was a 'standard' prison door.

Is this type of cell door a purely theatrical device? Or do such cell doors exist in contemporary prisons? Is there any point to them? Other than not having the encumbrance of needing a key? 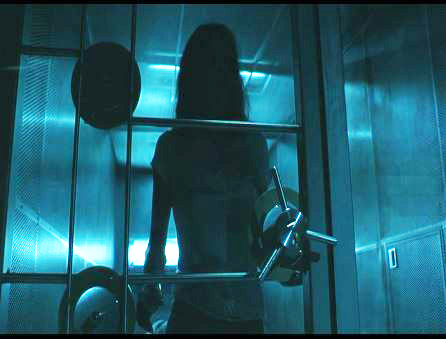 I think the door was purely for cinematic purposes. I was actually googling around for some further information and found that TV Tropes had an interesting section on Tailor-Made prisons. To paraphrase from their article, they mentioned how having such a prison distinguishes the prisoner and makes them appear more dangerous and isolated.

That much is probably already obvious, but something they mention which I found quite interesting was that from a filming point of view, bars simply get in the way. For example, would the true creepiness of Hannibal Lector really have been apparent if we hadn't been able to see every part of him, close up - without bars obscuring our view. Similarly, in Gothika we get great shots showing all of Miranda Gray, with only two bars and a handle really obscuring our view.

On a side note, I have read about some prisons moving towards plexiglass systems, as it is impossible to attempt any form of suicide against the glass, whereas they could hang themselves using the bars as help. Unfortunately, I can't for the life of me find a reference for this, so for now it's just my own speculation.

All prisons I know of either have standard sliding steel cell doors with no glass, or (in a SuperMax) are steel "storm" doors with a small window at eye level as well as a slot no bigger than a few inches, where meals can be handed to prisoners or prisoners can back up to in order to allow a guard to handcuff them before opening the door. That door in Gothika was purely for cinematic purposes.

Not the answer you're looking for? Browse other questions tagged realism gothika .

10
What was with the two different colored prison uniforms in Daredevil season 2?
9
Shouldn't Elliot have been caught or at least noticed outside of the prison?
3
How did inmates escape through the sea in Prison Break
21
Why is the movie titled Gothika?
1
Does the sound of a gun fired in a large room actually take time to "die", as told in "Prison Break"?