Why does time flow differently on Miller's planet?

When the crew in Interstellar went down to Miller's planet then came back up we find that 23 years have passed for Romilly. Can someone please explain why and how did that happen?

IIRC it was something related to the black hole, but Romilly was orbiting the planet itself. Why did time pass longer for him? Why did the landing on the planet make such difference?

The reason for this is what's called gravitational time dilation, which generally states that the stronger the gravitational potential, the more slowly time passes. Black holes like Gargantua have massive gravitational pull, so strong that even light can't escape. Miller's planet is so close to Gargantua that time actually moves more slowly on the planet than for objects further away.

As such, one hour of time spent on the planet's surface was equivalent to 7 years passing in earth time, or "normal" time I guess you could say. That's why when they finally made it back to their ship, Romilly was significantly older, as was everyone they'd ever known. Romilly wasn't orbiting the planet, he was actually pretty far out from it, far enough that he wouldn't be affected by the time dilation caused by Gargantua.

What I thought, is explained in the image. Not sure to what extent it "can be" even considered to be correct. Lets hope, I have understood at least a part of it.

On Miller's planet, when an obj A travels for some units of time and it reaches the destination point Q. (P to Q) So meanwhile on Earth, (if we consider that Earth is in different space/planes, hence considered as tilted line with reference to Miller's planet), to reach to point Q from point P, it would take greater time with respect to Miller's planet. (As general understanding/maths is that, two co-ordinates on the straight line, when dropped on a tilted line [perpendicular to the straight line], will generate relatively higher distance on tilted line.)

So, assuming this concept, time spent on Earth is greater than that of the Miller's planet. 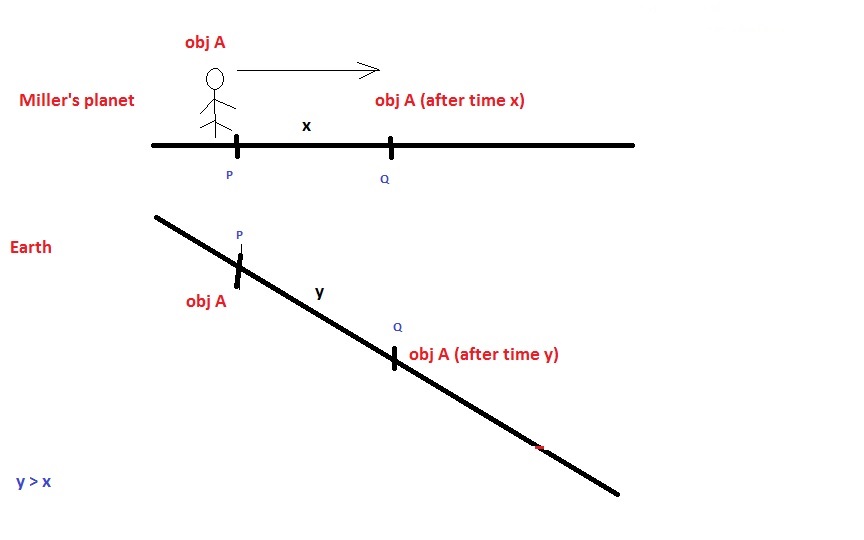 9
How is Cooper's age justified?

11
How did Jane start suffocating after smoking heroin?
9
Why is Cooper Station orbiting Saturn?
9
How could they survive and move that easily on Miller's planet if the gravity field is so powerful?
10
Is Gargantua a black hole or a wormhole?
8
Why did Colonel Hans Landa let Shosana escape in the beginning?
7
Why didn't they send more complex data through the wormhole?