When I was a child, we rented a children's movie one day from Jumbo Video during the 1980's. My mother slept through it, but my sister and I watched it. It was definitely animated, and may have been Japanese/Anime. It was a sort of action-fantasy movie.

I recall that air/wind played an important part in the movie as though the characters were air-warriors or wind-riders, or some such. I also recall an iconic image from the movie (either from the movie itself, or more likely, from the cover of the tape) being of a bunch of characters riding large animals towards the camera with wind and sand blowing behind them (something like the—very—crude drawing below). I forgot to draw it, but in this picture, they were running through some sort of dusty valley, so the picture should have had some cliffs on the sides.

Another uniquely identifying scene I remember was of a boy and girl in a cave, wherein one of them (I believe it was the girl) eat some ice cream that turned out to contain Tabasco/hot sauce/jalapeños, after which she spat it out and gasped for water.

Does anyone know what movie this was? 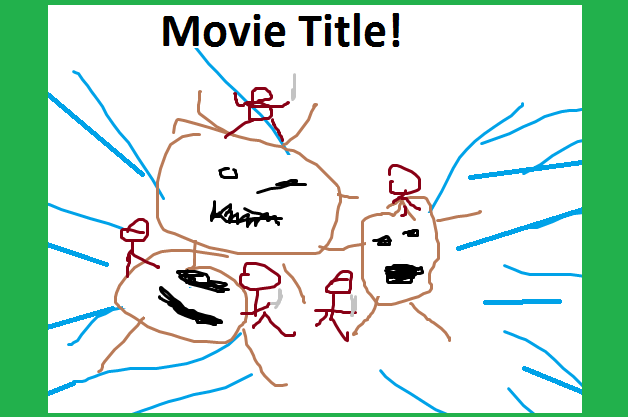 I'm almost tempted to say it's "Warriors of the Wind", which is a bastardized version of the anime classic Nausicaä of the Valley of the Wind. 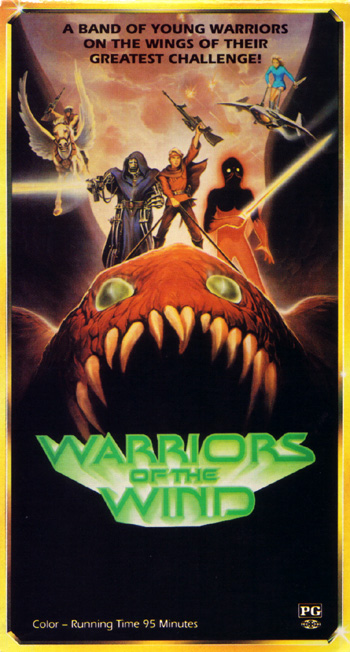 Everything sort of matches your description, though I'm having trouble with the Tabasco ice cream. In the original Japanese version there was a scene where Nausicaa and Asbel are eating nuts inside an underground cavern, they turn out to be really really bitter. But I'm not sure if that scene made it to the Warriors of the Wind version.

Probably a long shot, but could it be Windaria?

The mountainous kingdom of Paro and the coastal city-state of Itha had been at peace for over a century. They would have remained that way but for the ambitions of Paro's power-hungry king. Paro invaded Itha, despite the love between Jill, Paro's prince, and Ahanas, Itha's princess. Caught between duty and emotion, the star-crossed lovers were forced to fight a war to its bitter conclusion. Isu was a simple farmer from the neutral village of Saki, but he saved Itha from being destroyed by a spy from Paro, and found himself hungering for wealth and glory that the Ithan monarchy could provide. Agents from Paro made him an offer to fulfill his wishes, and he left his wife Marin behind in what would turn into a battlefield between the two kingdoms.