This movie is recently released and I'm sure some movie fanatics have seen it here.

Warning: this question has spoilers.

It is set during the last month of the European Theater of war during World War II in April 1945. A battle-hardened U.S. Army fight against Nazi Germany.

In the end of the movie, the tank "Fury", having Brad Pitt and his men (soldiers), hit a landmine in the middle of nowhere on Nazi territory (and got stuck); shortly afterwards, a German column of 300 German Waffen-SS infantry approaches.

But eventually, one German sniper kills Brad Pitt and his men except one: Norman.

Norman escaped through the bottom hatch of the tank and he hid under it.

In the end, surprisingly, a young German Waffen-SS trooper finds Norman, smiles a bit, but does not turn him in, leaving him safe beneath the destroyed tank as the surviving German soldiers move on.

Why did he do that? What were the implications from this and is there any explanation for this behavior, because it doesn't make a lot of sense.

Director David Ayer explained the ending in an interview:

Interviewer: One thing I know has been an early kind of discussion point is at the very end of the movie in the moment, of course, when Logan is under the tank and there is this soldier from the other side. Some people have kind of criticized that. To me, I kind of read it as what we were seeing in that moment was almost all the stuff we had learned with his character up until there. This was like the mirror of that on the other side and they kind of have that moment. That kid is like him and he kind of moves on. Is that right?

David: That’s exactly it. It’s not Logan’s war. The thing is over in four weeks. This kid should have been going to college, but by that time they stopped the deferments because they were running out of bodies to send in and fight. And the same with the Germans. They were grabbing kids out of classrooms But the idea is, it’s not their war. They shouldn’t have been there. And somebody has to rebuild when it’s over. There’s people on both sides of it. In four weeks they are not the enemy anymore. There’s just something interesting about that.

My interpretation of the ending was a little different. I saw this as karma. Earlier in the movie, Norman refused to shoot a Nazi soldier who was begging for his life to be spared. Norman chose to die over shooting this man. I think in the end, Norman looked at the soldier with pleading eyes and the Nazi soldier let him go because he, like Norman, knew there was no point in shooting the other man.

This mirrors a real life event. While there is nothing saying they intentionally wanted to imply this, this is well known. American Bomber Pilot Charlie Brown, already flying a shot-up plane with injured crew, after a successful bombing run, was trying to return to Allied Territory. German Fighter Pilot Franz Stigler, instead of shooting them down, escorted them back to British skies. 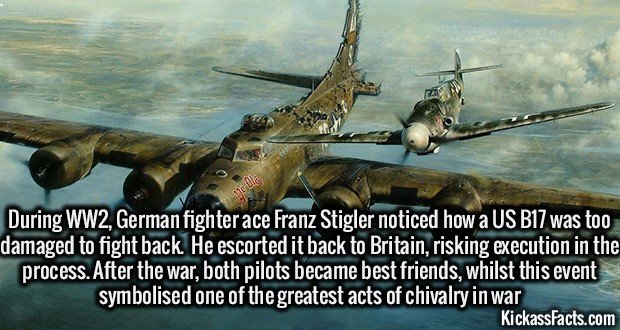 And this happens all through history. In every war, there are people that for multiple reasons, don't kill an enemy soldier. Most of it is hearsay and second or third hand recollections, but there are a couple of documented cases.

Its also very common in media. Twilight Zone, "Two" and "A Quality of Mercy" come to mind.

The reason the young German Waffen-SS Trooper did not turn him in is because like you said, he was young. He was basically in the same situation as Norman.

Here's My take: The whole movie is showing you how war turns people into something nonhuman: people who act like animals, that closing shot the tank from the top down like it's a steel coffin being lowered into the ground, the kid getting nicknamed "Machine" and such.

The German who saw him was just like he was- Human. He hadn't been turned into a "Machine" yet- he hadn't been fighting long enough to be turned.

I also think the tank being named "Fury" is a statement on how people become machines to fight in a war for war's sake: "Fury" or "Aggression" or "Hate" is like a drug that will get you hooked and consume you. I think there is plenty of evidence for that in the movie- like how "Machine" was reluctant to use the gun until he got pissed at the Germans ambushing them, and made a point to say afterwards that "he kinda liked it."

...and it gives the red-scale film snippets during the credits of Nazis laughing with small children doing the Hitler salute, flashing to people dancing, flashing to snippets of violence a whole new, incredibly haunting meaning.

There are a million reasons why this would have never happened:

Not the answer you're looking for? Browse other questions tagged plot-explanation analysis ending fury .

9
Why did James Moriarty decide to end it this way?
5
Why did the Indians decide to end it this way?
16
Why did American History X end so unexpectedly?
6
Why did Riggan Thomson choose to end his play that way?
6
Why didn't Germans simply set Fury on fire?
13
Why did Max leave the Citadel at the end of Mad Max Fury Road?
2
English translation of SS officer’s line in Fury
4
Why Did 'Lucifer' Season 3 End the Way It Did?
7
Why was God depicted this way?
5
Why did Fury lose his eye this way?