How is Agent J able to get the time-travel device in Men in Black 3?

In Men in Black 3, Agent J (Will Smith) goes to see Jeffrey Price in the electronics store to obtain the time-travel device built by Price's father that J can then use to travel back to 1969 to avert K's murder.

However, in an earlier scene in the film, we see Boris the Animal (Jermaine Clement) visit Jeffrey Price in the same store to obtain the device in order to go back to commit the murder.

I understand that time-travel films open up a huge kettle of worms when it comes to inconsistencies and plot-holes, but this seems to be a glaring error.

As it is shown that the device stays with the user when they time-jump, are we to assume that there is more than one device (which does not seem to be the case when we are shown the holding container), or is this just a script error?

I've only seen the movie once, but when Jeffrey Price shows us the case with the single time travel device in it, there was an empty space next to it that suggested he had two devices. 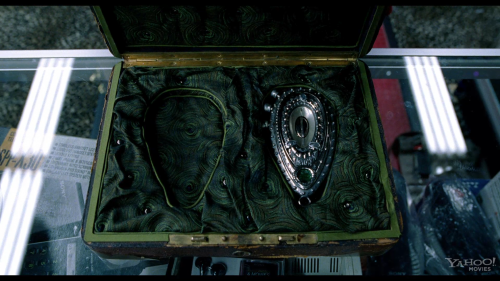 The box had room for 2 devices. The log book shows Boris had not returned. Boris then gets fried under the rocket so he couldn't have returned anyway.

My assumption when watching the film was that, when Boris returned to the present, he gave the device back, thus enabling J to go back in time with the device. I believe that it's actually evidenced in Jeffery's log book.

Had Boris been smart he would have thought to not return the device, but as we have seen he's not the sharpest crayon in the box.

I have another explanation (sorry, English is not my mother tongue).

I prefer this one, unfortunately it leads to a stronger inconsistency of the scenario:

To sum up, in the 2nd version, Jeffrey should have not met Boris, but only J! Thus no problem if there in only one time device! Nevertheless, there is a big script error. Jeffrey-2 should have never met Boris in 2nd spacetime. Anyway, that inconsistency was necessary for the scenario (By the way, maybe you know that the storyline writing was a huge pain in the ass _ Griffin would have said ^^)

Young Boris-1 splits to Boris-2 at the time he keeps his arm (thanks to Boris-1), he doesn't go to prison, and coordinates boglodites' invasion in 2012, as one can watch before J travels to time.

Young Boris-1 also splits to Boris-3 (due to J's intervention upon Boris-1s'one), and is killed by K a few minutes after killing J's father, instead being stopped as B-1 was.

That's not all! Just before vanished, due to J's intervention too, old Boris-1 splits to Boris-4. He dies incinerated by the rocket.

Not the answer you're looking for? Browse other questions tagged time-travel men-in-black-3 .

10
What did Griffin show the Colonel to convince him in Men in Black 3?
5
Are the Men In Black movies an example of spiritual growth?
6
Time Travel & The Girl Who Leapt Through Time
7
What are the time travel rules in Midnight In Paris?
10
What's the rush to travel forward in time?
3
How does time travel work in the Terminator franchise given the nature of the time travel devices and the movement of the Earth?
6
Meaning and influence of the tip at the end of Men In Black 3?
4
First appearance of going to past (time-travel) to change the present