Now discounting satires or films that are specifically about fighting...

Is the brawl between Nada and Frank in "They Live" the longest non-stop fight in a film? It's clocked at around 5 minutes of (well, really silly) brawling.

(The fight in its entirety can be found on YouTube) 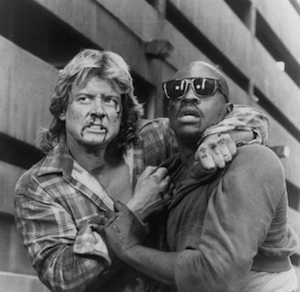 Added examples, all over 5:05 - hopefully will lose the downvote.

I would say no, principally because of Jackie Chan. His movies like Supercop and Rumble in the Bronx are basically 90-minute street fights punctuated with bursts of dialogue.

A few excerpts from the master of the running non-stop fight:

Also the final act of Kill Bill Pt. 1 is pretty much a non-stop fight:

Both together would clock in at almost 20 mins but there is a breather after she finishes off Gogo.

It's a great scene in a great film but the fights in Eastwood's "Every Which Way But Loose" and "Any Which Way You Can" were clearly longer, as was John Wayne's excellent "The Quiet Man".

Thirteen Assassins has got to top the list. The final battle is over 45 minutes of nonstop fighting. No dialogue breaks, no plot twists, just thirteen badasses against two hundred hired goons.

I do not have measurements to hand but wasn't the sword fight which ended up in the wheels in the pirates of the Caribbean sequel longer than 5 minutes?

Also, do battle scenes count? The dday sequence of saving private Ryan is longer than 5 minutes.

Not the answer you're looking for? Browse other questions tagged stunts .

10
What happened to Frou-Frou in the 1967 Soviet film Anna Karenina?
4
How did they film the motorcycle jump in Point Break (2015)?
0
Animals died during the film shooting?
4
How do they remove the wires from flying/stunt scenes?