Agents of Shield: looking for clues for its impact

It has become clear that events in the Marvel Cinematic Universe can have direct influences in Agents of Shield. I'm interested in the influence in the reverse direction. That is, I consider the following question:

(Q): Are events in AoS consequential to the MCU?

I'm looking for events or clues on past episodes or events that have happened in the MCU or information revealed from the creators, filmmakers, showmakers to answer (Q).

So far, I personally haven't found good support to answer YES to (Q).

p.s. Coulson being made director seems to indicate that the impact is permanent but recent events in S02E04 (I Will Face My Enemy) suggest a possibility that Coulson may eventually be killed (by May). In the MCU, Coulson is dead so if he is killed again in AoS, his resurrection can easily be brushed over.

As of Season 2, AoS has introduced the 'Terrigen mists': a Kree originated bio-technology that transforms people/ activates their latent abilities.

With the announcement of The Inhumans in 2018, this is a significant contribution: The Terrigen Mists are a central component and a hallowed relic of the Inhuman culture, so much so that when the crystals (pictured) were stolen by the US government the Inhumans launched a terror campaign against the US to reclaim them. 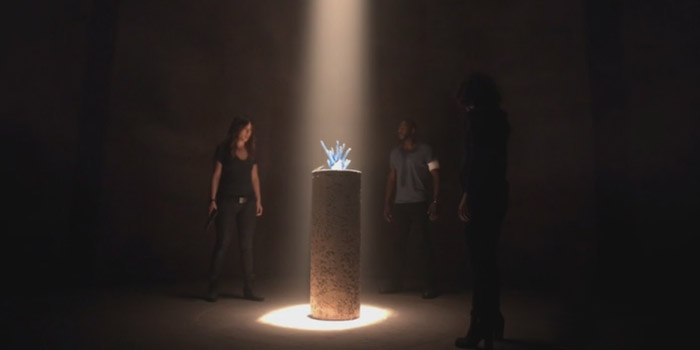 Spoilers for both Avengers: Age of Ultron and season two of Agents of SHIELD below.

We learn in the Agents of SHIELD episode "The Dirty Half Dozen" that;

It is Director Coulson that informs Maria Hill of the location of Baron von Strucker, Dr. List and Loki's Sceptre, which sets the events of Avengers: Age of Ultron in motion.

The next episode "Scars" shows us that;

The Helicarrier seen in Avengers: Age of Ultron during the evacuation of Sokovia was supplied by Director Coulson under something known as Theta Protocol.

These two events are clear proof that in-universe, the events of Agents of SHIELD matter to the rest of the Marvel Cinematic Universe (out of universe, it is more than likely that the TV show is simply finding ways to make itself a part of the broader picture set by the movies).

Also in the Agents of SHIELD season 2 finale "S.O.S";

We see that the faux-Terrigen Crystals created by Jiaying are dissolving in the sea, infecting fish that are swimming close by. These fish are then caught by fisherman and turned into Omega 3 Fish Oil pills. We know that if any latent Inhumans swallow these pills, their powers will be activated - potentially creating a sudden influx of powered people in the Marvel Cinematic Universe, which could form the basis for the upcoming Captain America: Civil War film.

8
Is there any particular order in which one should watch the movies of Marvel Cinematic Universe? Why?

12
What is Black Widow's service record?
13
Do I need to watch Agents of SHIELD before watching Agent Carter or Daredevil?
8
Are Agents of Shield Storylines/character ever referenced in MCU films?
5
How does Howard Stark get the vibranium for Capt America's original shield?