At the end of the credits of The Walking Dead epsiode S05E01 we got to see a familiar face, seemingly following the group. He seems to be able to follow them from a "sign" carved into a tree? Or am I misreading this scene? 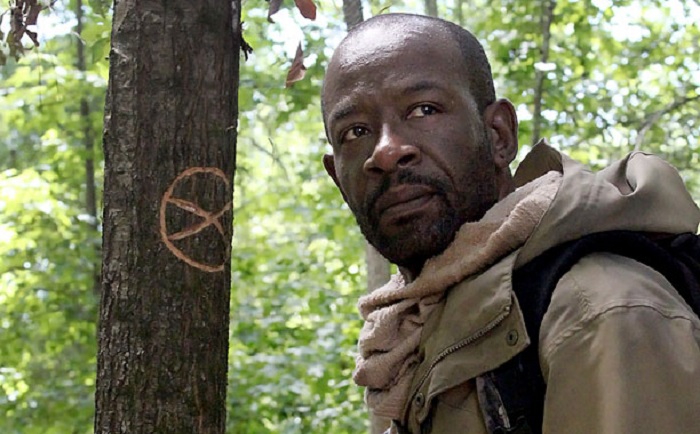 In episode 2, Strangers, just before Bob is abducted we see a gash carved into a tree. I presumed this was made by the gang from Terminus.

Then in the next episode, Four Walls and a Roof, the leader of the terminus gang, Gareth, is telling Bob why they did what they did. He says:

You know, we marked our way here so that we could find our way back after

So I thinks its' pretty clear the Terminus gang made the markings, which Morgan came across and followed to the church, where he can be seen at in the scene after the credits on episode 6.

12
As of S03E01, does walker blood have an effect on open orifices/wounds?
4
Is there enough evidence in the mid-season finale to conclude “Little-Ass-Kicker's” fate?
13
Can a zombie be eaten?
4
Why don't humans become Walkers when eating other humans who are infected?
8
Zombies At The Fence - filming head injuries to walkers
25
What is the meaning of the letter A?
7
How did Carl survive the eyeshot?
3
Where is Wade from s6e6 of walking dead in season 8?
0
What happened to the group at Grady Memorial Hospital?