What is the significance of the little Russian kid story?

In a scene of The Equalizer where Robert McCall (Denzel Washington) is sitting in a restaurant in front of Teddy (Marton Csokas) McCall tells him a story he heard from a Russian officer.

The story goes about a Rich man who decided to adopt a poor kid into his family. Later on both the man and his wife were killed by someone. McCall later says that he thinks the poor kid was the killer. 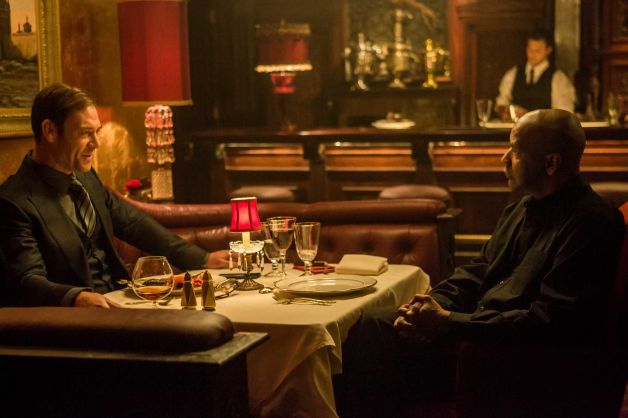 The movie never explicitly revealed the relevance of that story, but while McCall was telling it, Teddy made a comment like

"You think you know me?"

This gave me the impression that McCall was revealing how much research he had done or intelligence he'd acquired, and that the story was about Teddy - he was the orphaned boy. And Teddy's response was essentially saying that knowing my history doesn't mean you know me.

But, the movie is not clear on the subject.

I think it's more than McCall researching Teddy. It's McCall basically saying, I know you, I know where you come from because I've been there myself. This scene is vitally important because it shows that Teddy/Nicolai is not a comic book character but someone whose history has brought him there.

And most important, McCall knows Teddy because he probably had a similar history of abuse, abandonment, lack of trust i.e. sociopath. It's important to note that McCall got his best night's sleep after slaughtering five men. These 2 men have much more in common that we would like to admit. Teddy/Nicolai cannot step beyond his background.

I could on forever on this scene, because it is vital in developing the relationship between McCall and Teddy, his antagonist. The acting was superb, the pacing genius (especially by Marton Coskas).

Absolutely love this scene in this movie and played in over so many times but was always unsure on exactly what McCall was trying get across to Teddy with that story. So I Goggle searched and came here and read everyone’s comments and then watched that scene again twice… and now I get it.

Before McCall tells the story Teddy asks him, “When you look at me… what do you see? Hm? The answer’s nothing. I have no feelings about you one way or the other. You’re like… like lint or a bottle cap. You’re just a thing to remove.”

In the middle of the story McCall says three very important things: He tells Teddy to stop him if he knows the story [Teddy says, “Oh no. Carry on”] and he says “Intruders” (plural) broke into the home and some small things were stolen, things a “child” (singular) might steal.

McCall represents the little boy that the good man loved. As an orphan, the little boy had no love or support and therefore became a troubled child. In parallel to the orphan boy, McCall once was a professional killer, forced it a troubled life, unable seemably return to good. Until McCall escaped using the love of his wife as did the boy with the good man. The boy supposedly killing the good man and wife because the idea that the good man might toss him away like everyone else like a piece of lint. Nikolay fits into McCall's analogy as the idea of the old man throwing away the boy. As Nikolay refers to McCall as a negligible as a piece of lint he needs to remove. The killing of the good man and his wife equivocates to McCall returning to being a professional killer. Like McCall returning to the troubled life, a more familiar life, that he promised his wife he'd, by killing nikolay and Pushkin. The same as troubled boy returning to the orphanage, a more familiar place.

So when nikolay says you think you know me, McCall's response about if nikolay know him (McCall) alludes to nikolay inserting the idea of "throwing away lint" is causing him to revert back into a killer.

I think ultimately the scene is about offering a plausible explanation of how a person like Nicolai might come to be.

The show is ambiguous about whether or not it's meant to be Nicolai's backstory specifically. Whether it is or isn't, McCall is ultimately expressing that he understands that the basis of Nicolai's ruthlessness is a fear of inadequacy.

"You think you know me" was only because McCall called him "Nikolay"! And I think the story was none of those people real background except that McCall trying to explain nikolai that he has nothing to do with forgiveness or mercy on nikolai if he don't cancel the operation. Because nikolai was nothing to McCall. After that McCall told him that he has done something he never proud of, and made a promise to his gone lover not to do them again, but for him, McCall gonna make an exception!💀 In other words killing Nikolay for McCall was like breaking a promise! And breaking that promise to his lover for McCall was like killing those parents by that kid!

In fact McCall is trying to tell him: In opposition to you, I'm not heartless, I'm full of emotions but I can easily wipe your ass out!

"but for you, I'm gonna make an exception"

Not the answer you're looking for? Browse other questions tagged analysis plot-explanation the-equalizer .