What lead to Don and Betty getting divorced on Mad Men?

Through the first three seasons of Mad Men, Don and Betty's relationship (and Don's indiscretions) are a primary focus.

What factors contributed to the dissolving their marriage?

plot-explanation mad-men
Share
Improve this question
edited May 22 '12 at 20:45

While there are many possible factors contributing to Don and Betty getting divorced, based on what we the viewers observe, these are the most glaring contributors:

Both Don and Betty had extra-marital affairs. What follows is a list of the people both had relationships with outside of their marriage. 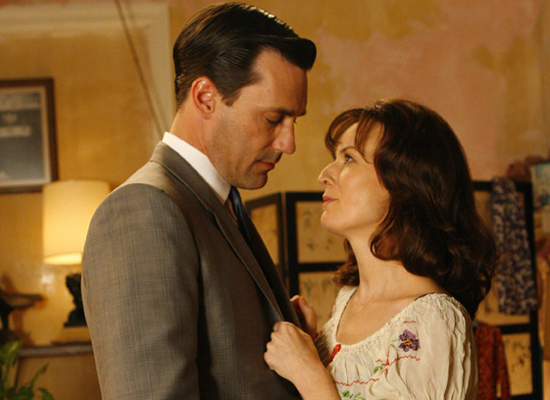 Don and Midge conducted a continuous affair over the course of the first season. Her life as an art illustrator allows her to experiment freely with marijuana with other Beatnicks and "proto-hippies," as well as lovers other than Don. Don concludes the relationship at the end of Season 1 after seeing a picture of her with another man. (Wiki) 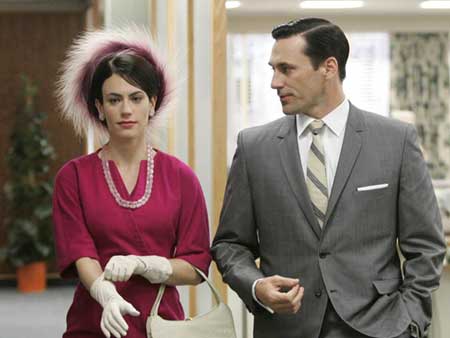 Menken is the head of a her family's department store, Menken's, who meets Don at a pitch meeting at Sterling Cooper. When Pete Campbell attempts to blackmail Don, the latter suggests Rachel join him in an 'escape' to Los Angeles. Rachel rebuffs, Don persists, and the relationship ends when she calls him a "coward" upon the realization that Don only wanted to run away, not run away with her. (Wiki) 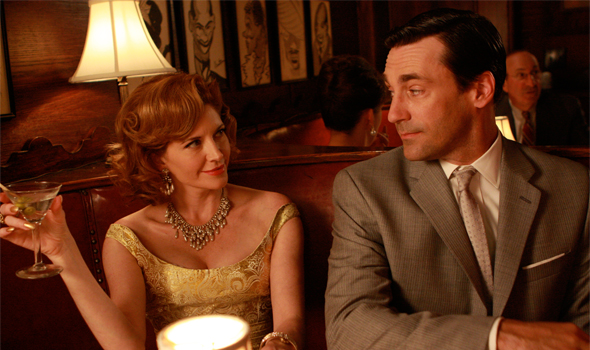 Bobbie Barrett (Melinda McGraw) is the wife of comedian Jimmy Barrett (born Jimmy Bernstein) (Patrick Fischler), an insult comic reminiscent of Don Rickles, who the firm uses in their advertisements for Utz Potato Chips. After Jimmy insults the wife of Utz's owner about her weight, Don has to intercede and ends up meeting Bobbie, also Jimmy's manager, who shrugs off her husband's behavior. On the way to get Jimmy to apologize to the Schillings, Bobbie seduces Don, though he initially resists as he is determined to remain faithful to his marriage vows, despite previous infidelities. When Bobbie later tries to get more money from Don (in a bathroom of the restaurant they and Schillings are at for the apology) in exchange for the pay-or-play contract of her husband's, Don grabs her hair with one hand and puts the other up her skirt and his fingers up further still, then threatens to ruin Jimmy. Bobbie appears to enjoy the attention, and then quickly makes her husband apologize. Later, she comes to Don with a TV pitch called, "Grin and Barrett," a sort of Candid Camera-type show, except with her husband using his insult comic skills as the host. Don helps her arrange things and they continue to see each other on the side until the two are in a car accident that requires a cover up story. The two resume their affair after a brief hiatus following the accident but the affair ends when Bobbie reveals to Don that she and other women with whom Don has had affairs have been talking about his prowess as a lover. Upset to learn that he has a "reputation" and annoyed at his inability to control Bobbie, Don leaves Bobbie during the middle of a sexual encounter while she is tied up. Later, during a party, where Don and Bobbie and their spouses are in attendance, Jimmy reveals to Betty, Don's wife, that Don and Bobbie have had an affair. Betty is humiliated and kicks Don out of the home for a time. Though Betty may have suspected affairs in the past, Don's affair with Bobbie appears to be the only affair Betty actually knows about. Don later encounters Jimmy in an underground casino where he delivers a solid punch to Jimmy's face and knocks him off his feet, which Jimmy later disparages as nothing. (Wiki) 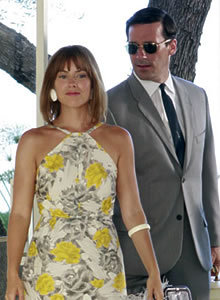 After impulsively deciding to accompany Pete Cambell on a business trip to Los Angeles, Don meets a European viscount with a 21-year-old daughter named Joy. The two sleep together after Don joins the viscount and his family on a trip to Palm Springs, terminating the relationship when he departs to visit his old friend, Anna. (Wiki) 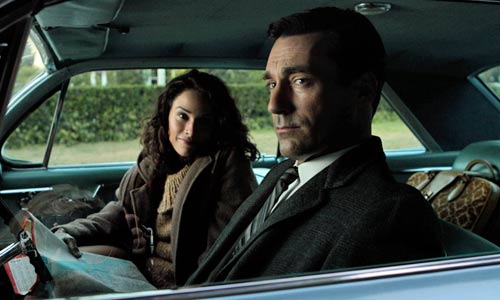 At the beginning of Season 3, Suzanne Farrell (Abigail Spencer) is Sally Draper's homeroom teacher. She engages in an extended period of flirtation with Don, and eventually enters into a sexual relationship with him. ... At the end of Season 3, Don signals a desire to strengthen their relationship, but his plans are scuttled when Betty unexpectedly returns home from a vacation and confronts Don about his past. (Wiki) 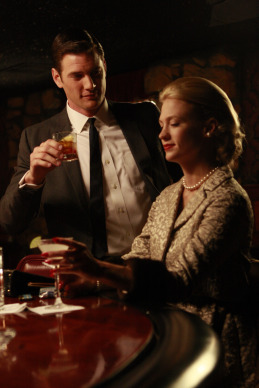 After discovering she is pregnant in the finale episode of Season 2 ("Meditations in an Emergency"), Betty meets a stranger at a bar and has sex with him. (Wiki) 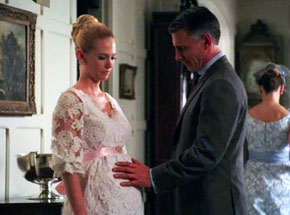 Henry Francis (Christopher Stanley) is a Republican political advisor who serves as the Director of Public Relations and Research in the Governor's Office under New York Governor Nelson Rockefeller and, later, is an advisor to New York City Mayor John Lindsay. He is instantly infatuated with Betty Draper when he meets a six-months pregnant Betty at the Sterling's Kentucky Derby party. Later, when Betty calls him to ask if he can use his influence to save a local reservoir, they develop a personal connection. Betty reciprocates Henry's attention because she increasingly feels no connection with Don due to his non-stop infidelities, lies over his true identity, and his sometimes verbally abusive attitude towards her. After the death of Betty's beloved father, the much older Henry also serves as a replacement father-figure for her. Henry and Betty have only a few brief and furtive meetings before Henry proposes marriage in the wake of the Kennedy assassination. Season 3 ends with the two of them on a plane with baby Gene, presumably flying to Reno so Betty can obtain a quick divorce from Don. (Wiki)

Don concealing his past

The name "Don Draper" is an alias; his given name is Richard "Dick" Whitman. Draper was born in Illinois to a 22-year-old prostitute, who died giving birth to him. He was subsequently taken in by his biological father Archibald "Archie" Whitman and stepmother Abigail. When Dick Whitman was 10 years old, his biological father was killed by a spooked horse that kicked him in the face during an electrical storm; Dick witnessed this. Subsequently, Abigail, Dick and his half brother Adam moved to Pennsylvania (described by Draper as "coal country") and were raised by Abigail and a man referred to as "Uncle Mac".

In Episode 11 (of Season 3), Don is cornered by Betty, who has managed to unearth evidence of Don's past life via pictures and documents from a locked drawer in his desk. He tells her about his life as Dick Whitman, how he came to exchange dog tags with Lieutenant Don Draper, and his half-brother Adam's suicide. While apparently somewhat sympathetic to his feelings of guilt about the latter, Betty is highly conflicted about the fact that Don has hidden this aspect of his life from her for the duration of their relationship and marriage.

In summation:
Don's habitual extra-marital affairs, and his lying when confronted by Betty, resulted in her being unable to trust him. Not sharing his true past with Betty pushed her further away, and likely left Betty feeling like she didn't even know the man she married.

Betty, feeling alienated and alone, sought the attention she needed from another man.

Other factors, including Don working late, having a temper and having her psychiatrist send Don transcripts and tapes from their meetings (which she discovered along with the materials documenting Don's true identity), undoubtedly contributed to their dissolution.

Don and Betty only loved the idea of each other. On the other side they looked perfect. Both of them good looking, charming, and had a great sex life. However, Don's mommy issues made it impossible for his to stay faithful to Betty. He does try but fails every time.

Also, both Don and Betty keep don't really talk about their problems. Throughout their marriage, Don tries his best to keep Betty happy but she never talks to him about what's bothering her. She keeps it to herself and it turns her into a bitter person.

Don opens up more to his mistresses than he does to Betty because he's scared of not being the perfect man she thinks he is. He knows that if she knew the real him, she wouldn't want to be with him. However, it's the fact that he lied to her for so long that made her file for divorce, that and the fact that she was already in love with Henry, a man she was having an affair with.

Not the answer you're looking for? Browse other questions tagged plot-explanation mad-men .

17
What was wrong with Betty's hands?
14
Why did Don Draper steal the identity of his fellow soldier?
10
What happened between seasons 2 and 3 of Mad Men?
7
Why "The Best Things in Life Are Free?"
3
What is the significance of the Coke ad?
5
Why was Don Draper self-destructive?
11
Was it that easy to fake identities back in the 1950s?
4
What play do Draper and Megan see?
2
What would SC&P need a Computer for?