Were all the ghosts in the Ghost Busters movie 'evil'?

As per the title, is there any evidence that some of the ghosts in the Ghostbusters movies were benign?

For clarification, 'evil' in the respect that all seemed to go out of their way to terrorise New Yorkers and apparently, not much else.

Most of the ghosts in the Ghostbuster series seem content to ignore humans unless in significant curcumstances. For instance, the Library Ghost is not causing any harm. She's just scary to people because she's a ghost. She's not aggressive until the Ghostbusters show up, and only then, just long enough to escape.

When the future Ghostbusters were about to act out Ray's plan to "get her", she changed into a terrifying form and scared them away. She was never seen or heard from again until 1991

Also, Slimer has been known to employees of the Sedgewick Hotel for a long time. The only reason the Ghostbusters are called in, is that increased activity was making it more difficult to keep Slimer a secret. Like the Library Ghost, Slimer only got aggressive when threatened.

Slimer was a legendary ghost to all on the original staff of the Sedgewick Hotel. His usual territory was the twelfth floor, but his outings were usually non-violent and simply involved eating food. As a result, the hotel was able to keep a lid on the supernatural problems (for a while). For some reason, Gozer's approaching time of arrival provoked Slimer (and many other ghosts) into being much more active than usual. Eventually the staff couldn't keep the ghost a secret anymore and called the Ghostbusters.

As a matter of fact, of the 9 ghosts listed in the Ghostbusters Wikia, only 4 are overtly evil. Gozer, Gozer's minions (Zuul [the gatekeeper] and Vinz Clortho [the keymaster]), and the Stay Puft Marshmallow Man (which is actually just Gozer's Earth form).

In Ghostbusters 2, Slimer drove Louis Tully (Rick Moranis) to the Art Gallery in a bus so he could help fight Viggo the Carpathian.

That's a pretty nice thing to do. 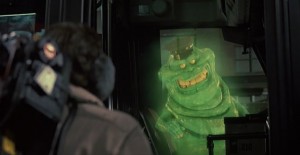 Not the answer you're looking for? Browse other questions tagged ghostbusters-2 ghostbusters .

6
Why is the ghost on the uniform patch making a peace sign?

6
Why is the ghost on the uniform patch making a peace sign?
5
What were Egon and Ray working on at the university?
4
Why were the Ghostbusters disbanded?