What was Quint eating in the town hall meeting?

In the movie JAWS, when Quint interrupts the meeting to make his bid on catching and killing the shark, he is eating something. I couldn't quite make out what it is. If anyone knows, please help.

Beyond being just a trivia question (and off-topic), what he's eating could give a little peak into his character's psychology, thus improving my enjoyment of the film. He obviously feels the need to eat it in front of people during a delicate and troubling time.

Granted, maybe it's nothing, and he just eats whatever is on hand whenever he's hungry, much like Bruce (the shark) did.

EDIT : Maybe it's an apple, like Napoleon suggests, but it seems cut into an even width piece as opposed to the crescent-shaped wedge (think orange or grapefruit pieces) apples are normally cut into. Also we only see him eating this one loud and crispy piece. No knife or apple core are to be seen, and Quint doesn't seem too much like a "cut up some fruit, put it in a baggy to take to the meeting" kind of guy.

According to this "Script to Screen" Q&A Session with the film's writer; Carl Gottlieb

Robert Shaw brought the idea that the Quint character he was playing should be eating something, jaws mimicking the shark itself and they gave him saltine crackers to champ on.

So there you go, straight from the horse's shark's mouth

After carefully reviewing the clip, I would like to refute my esteemed colleague's apple hypothesis and offer incontrovertible proof as a professional snack sleuth that Quint is, in fact, munching on a saltine: 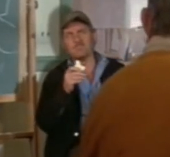 A saltine might be too specific of an answer. In fact, the cracker does appear to be rounded, and when he takes bites the cracker (I will concede it is, in fact, a cracker of some type) doesn't crumble or even break along the lines of any saltine I've ever had. Also, take a bite of a saltine and try to deliver a monologue such as the one he's delivering. Saltines are like eating sawdust, it'd never happen.

I would contend that he's actually eating Water Crackers. They are rounded in shape, make a loud "crunch" when you bite them (and that crunch was definitely used for effect, otherwise he coulda been eating bread or something), and don't tend to crumble as much as saltines.

That would actually make some added sense, as Navymen are often referred to as "crackers" and they make their living on the water.

This and many other characters enhancements were not in Benchley's novel.

Not the answer you're looking for? Browse other questions tagged character jaws .

11
Why does Blake draw the Batman symbols all over town?
23
Who is the blue elf lady in the Bad Anon meeting?
11
Why does Sam Quint smash the CB radio?
5
What was the deal with Dotzler?
1
Was Raj playboy or after every girl before meeting Simran
2
What does the prankster say in Jaws, through a mouthful of water?
4
Why does Quint blow the Orca's engine in Jaws?
5
Why did Quint have the tattoo removed?
5
Tony eating the lemon: provocative or innocent?