Is there any term for the following subgenres of horror movies?

Horror movies can be basically divided into two broad categories:

My question is this: are there any widely accepted terms that distinguish between these two sub-genres?

EDIT: I'd like to clarify that I'm not looking for specific subgenre terms like slasher or splatter. Those movies have their own characteristics, and though supernatural presence is uncommon in such films, it doesn't affect their definition. (An excellent example would be Final Destination, which has elements of both slasher and splatter, but has supernatural elements). If the first category can be called 'supernatural horror', I'm looking for a blanket term for non-supernatural horror. Or I'm looking for confirmation that no such term exists (which would be a shame).

To give an idea of the problems inherent in your question, consider this awesome graph from Horror Screen: 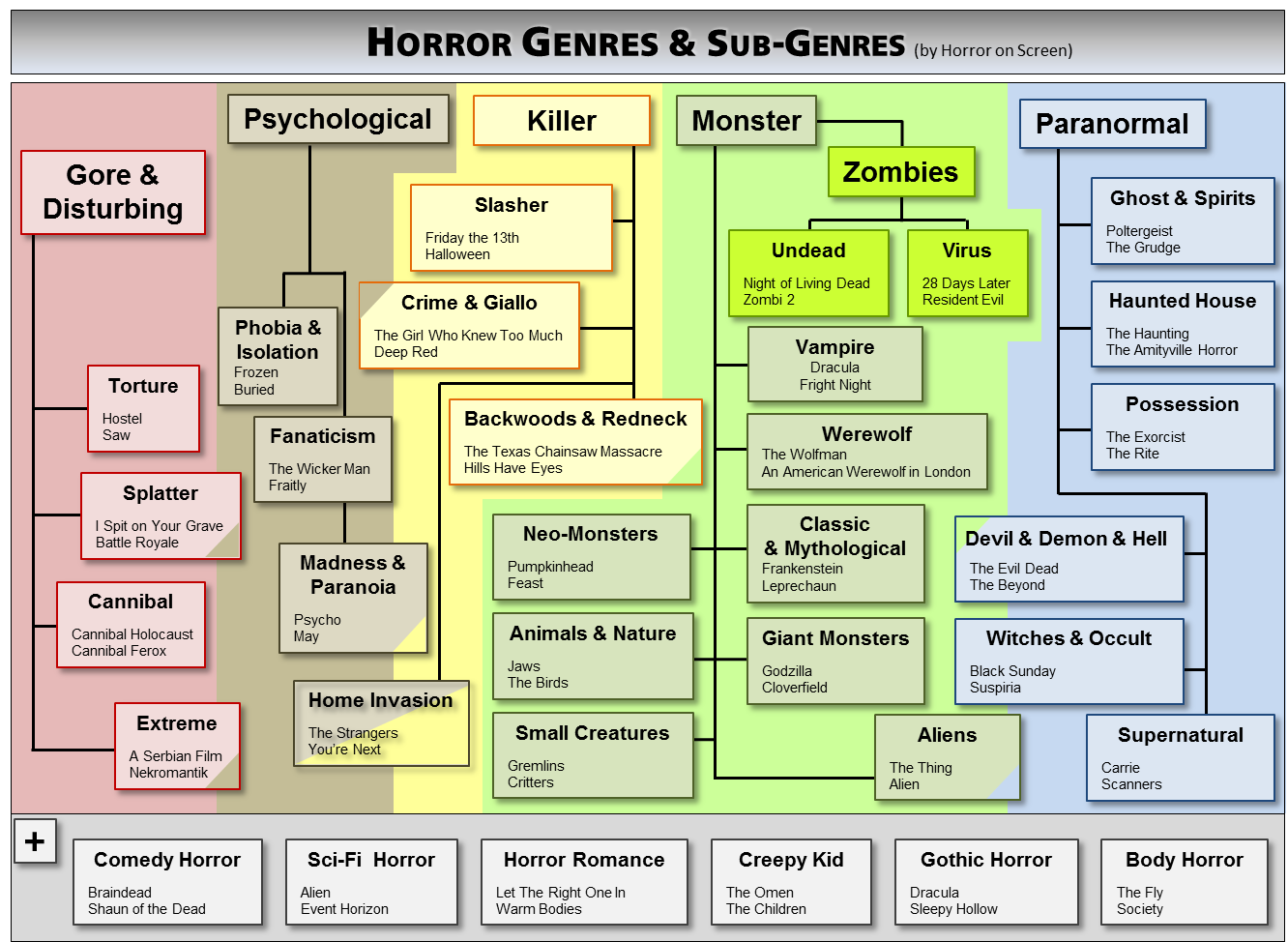 That is their categorisation of horror. Using their terminology, you could argue that anything in green or blue is supernatural whilst anything yellow, black or red is non-supernatural. Of course, you could have a torturous zombie film, but they would categorise that as monster. But would other people?

Ultimately, that's your problem. Whilst there are some very obvious and distinct examples, many films contain elements of both and as such there is no overarching terminology that seems to be in existence to describe what is completely or partly supernatural compared to what is totally not supernatural.

The nearest I can find is this entry on Wikipedia (complete with citation), which states:

Some writers of fiction normally classified as "horror" nevertheless dislike the term, considering it too lurid. They instead use the terms dark fantasy or Gothic fantasy for supernatural horror, or "psychological thriller" for non-supernatural horror.

However, again the key part of this is "some writers". There is no consensus in the film world about this. I certainly would not associate psychological thriller solely with non-supernatural - nor would I consider dark fantasies to be only supernatural.

So to concur with @Napoleon's answer: no, there are no widely used umbrella terms in existence to distinguish between these two sub genres.

I don't know how you would call a horror movie with a supernatural entity as main antagonist other than Supernatural Horror. I guess that is the most exact you can get for such a broad classification. There might probably be sub-genres of that concentrating on specific kinds of supernatural stuff, like ghosts, possessions, ..., but I'm not sure there are that established names for those sub-genres (other than obvious concatenations, like "ghost horror", "poltergeist movie", "excorcism movie").

For a horror movie based around some specific killer as concrete person (sometimes also with a slightly supernatural background, but often not) there is the common term of Slasher Movie:

A slasher film is a subgenre of thriller and horror film, typically involving a psychopathic killer stalking and murdering a sequence of victims in a graphically violent manner, often with a bladed tool such as a knife, machete, axe, scythe, or chainsaw. Although the term "slasher" may be used as a generic term for any horror movie involving graphic acts of murder, the genre has established its own set of characteristics which set it apart from related genres like the splatter film and psychological thriller.

And in fact Halloween and Scream are prime examples of this genre, being the spearheads of their respective Slasher eras, with the former having to some degree pioneered the genre and the latter being a revival/homage/parody/deconstruction of the whole genre and the originator of a whole new wave of "Teen-Slashers".

So much to the specific sub-genres adressed in your question and its examples. If you are looking for a broader disambiguation between supernatural stuff and anything non-supernatural but frightening and the definition of when something is to be called "horror" in contrast to, say, "thriller", that is pretty hard to define exactly, as the borders between those genres can be quite fluent. In the same way genre is often nothing exclusive, as genres can often be mixed (is Alien "science-fiction" because of the environment or is it "horror" because of the style of filming and the atmosphere, or is it "science-fiction horror"?).

In the same way horror is likely not to be derived simply from the question if it contains supernatural stuff or not, but more by the intended effect on the audience and the employed style elements. But those things are unfortunately not as hard to define and often the distinctions between genres transcend quite a bit.

Unfortunately I think the answer to "are there any widely accepted terms that distinguish between these two sub-genres?" is no - simply because they are not widely viewed as sub-genres themselves in English speaking countries. To question why, in English cinema, does Horror seem to encompass both supernatural and natural antagonists requires a look at the term itself. Horror comes from Latin roots (see below) meaning: shaking, shuddering, trembling; as if in fear or from disgust. The genre is concerned with causing the audience to feel the emotion of horror at the events unfolding and you can be frightened to the point of shaking from either natural or supernatural events or antagonists.

directly from Latin horror "dread, veneration, religious awe," a figurative use, literally "a shaking, trembling (as with cold or fear), shudder, chill," from horrere "to bristle with fear, shudder... http://www.etymonline.com/index.php?term=horror

you might do well to look into several of the sub genres. Found Footage is prominent, as are the occult, apocalyptic, and suspense-thrillers. you also may find film noir and neo-noir in the collections of horror aficionados alongside such staples as tragic horror, b-movie horror, the macabre(widely regarded as it's own genre), psychic horror, giallo, extra-terrestrial horror, disaster horror, fairy tale horror, lovecraftian horror, and grotesqueries. Try toying with your ideas of horror, as you will find fantastique, jiangshi fiction, weird fiction and it's child the new weird. delving deeper into the depths you will find gothic and it's cousins southern gothic, suburban gothic, tasmanian gothic, and urban/suburban gothic. further still you might find grind house, holocaust horror, early german expressionist films (the cabinet of doctor caligari), mutant horror, documentary horror, and serial killer stories. Down the rabbit hole you will find bizarro horror, torture flicks, historical horror, horror of personality, korean and japanese horror (see Ringu, the host, Audition, and the grudge most of the former and latter of which have been americanized for non-bilinguals), autobiographical horror, reincarnation horror, the Penny-dreadfuls, erotic horror (not suggested), and what some call Hagsploitation (Older woman in supernatural or terror-inducing peril) and blaxploitation (see the b-movie franchise blackula for examples). Crossgenre horror artists have produced such sub-genres as virtual reality horror, time and space travel horror, horror rooted in psychic powers, infection horror, action horror, horror of comedy, Drug Horror, and of course, Supernatural Romance (see examples such as let me in, or it's counterpart let the right one in, interview with the vampire) Oh, and don't forget Romance (no, not romance, but Romance) It's a very old genre which provided horror, and gothic literature with a place to grab on and fester and boil into it's current melting pot of all that it has become. Lastly, and I only mention this for people who watch every aspect of the genre, is a sub genre which critics and scholars alike have dubbed torture porn (nothing like how it sounds. for examples, look for such films as A serbian film, the Saw franchise, Hostel (parts 1-?), and the human centipede. Furthermore, I think you will find certain philosophical films, such as Begotten(1990) to be of great interest in your search for what constitutes horror.

Not the answer you're looking for? Browse other questions tagged horror genre terminology .

13
What is the difference between the horror and thriller genres?