What exactly is this crystal thing on Mars in Watchmen (2009)?

There is a scene in Watchmen (2009) on Mars with Dr. Manhattan. Every time I watch the movie I'm wondering what exactly is this crystal/diamond thing we can see on mars. 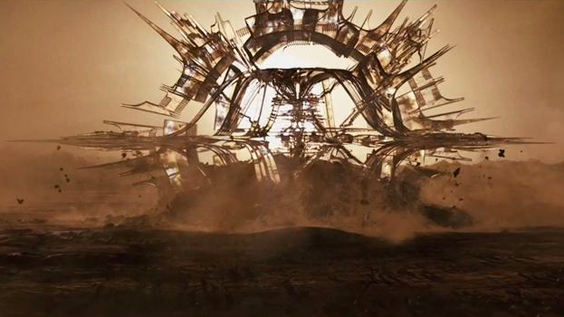 First of all, what this thing actually is, it's nothing more than a huge glass structure that Dr. Manhattan creates out of Mars sand. But to understand why he builds that, we have to look at his character a bit (at least as far as I'm able to do). I'll draw a bit of information from the comic here, not entirely sure by now how much of this is also part of the movie, but the overall themes should match (especially considering how true to the source material the movie was).

When Dr. Manhattan left earth this was because he was currently fed up with humanity (and probably also felt some guilt for Janey's cancer, not knowing that he wasn't the cause). To compensate this he takes refuge in the solitude of Mars. And as the son of a watchmaker, Jon Osterman learned from his father to admire the precision of such a watch as a structue of many simple parts that precisely interlock with each other. And I guess at this point he searches refuge in creating such a complex and precise structure out of something as simple as the sand of Mars, all while reflecting about his past life and trying to understand the nature of time and determination itself and the problems of cause and effect. And the corresponding chapter of the novel is indeed also called "Watchmaker", reinforcing this attitude. 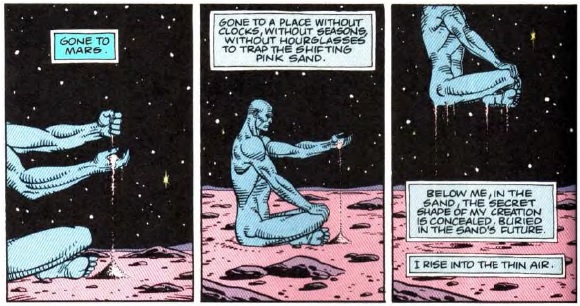 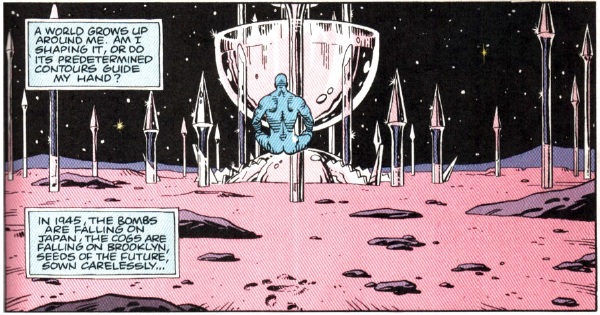 In addition to that, if we understand Dr. Manhattan with his godlike powers as an exaggeration (or perversion?) of Superman, this walkable structure in the solitude of Mars might as well be understood as an allusion to Superman's crystalline Fortress of Solitude in the lonesome depths of Antarctica.

As others have said, Manhattan has guilt. I think he hated that humans die and wanted to create something that showed time (his wheel clock thing) but would not die. This clock wheel will not die like humans do. But it will be there with him. If you notice when he was building it he was in a meditative pose while hovering. Buddhism has a lot of talk of getting away from it all to find inner peace. The Buddha himself discovered he could not always be alone and that he simply must have some interaction with others. Maybe this wheel clock thing is otehrs to Dr Manhattan.

I think since Doctor manhattan was haunted by guilt of the cancer ,he thinks he's also responsible for the end of it, so he built him self a time machine to travel back and forth in time to fix the problem of his guilt.

Not the answer you're looking for? Browse other questions tagged watchmen .

14
Why does Rorschach speak with such a growly voice?
20
What are the qualities of Watchmen unique to comics and in which way did the movie achieve to adapt those to the medium of film?
23
Is the scene with the girl putting a flower in a soldier's rifle's muzzle a reference to a specific event?
3
Is Rorschach bulletproof?
5
Was Rorschach suicidal?
10
Gerard Butler in the Watchmen?