In the Incredible Hulk, Banner gets help from a scientist in NY who was experimenting with the Hulk's blood. His name is Dr. Samuel Sterns, but he calls himself Mr. Blue when chatting with Banner.

Later on, Mr. Blue helps Banner develop an antiserum of some kind and is then forced by Maj. Blonsky to hulkify him. After the mutation, Blonsky knocks him out, he drops to the ground and you can see some of Hulk's blood dropping onto Mr. Blue's head wound, causing his head to mutate.

I was expecting this scene to be significant later on, but this was the last we see of Mr. Blue in the whole movie. Not even a hint of what happened to him after the credits.

Was this a setup for a sequel? Or maybe an insider reference to the comic books? Are there any known plans to bring him back? If not, why did the producers put this scene in?

This is explained within the MCU comic Fury's Big Week, which bridges the events between the MCU Movies Iron Man 2, The Incredible Hulk and Thor.

In the comic, Sterns is retrieved by Black Widow, who has discovered him in the mutated form of The Leader. 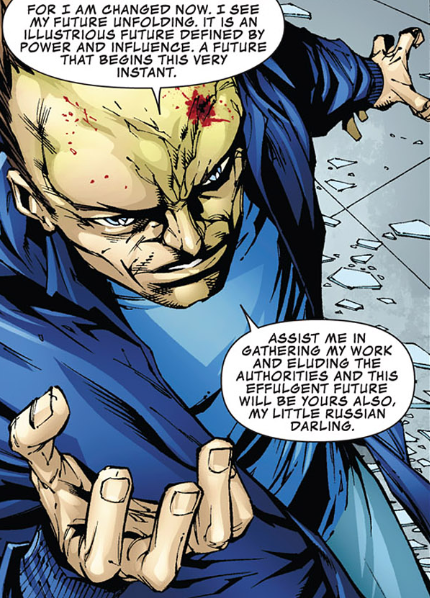 Romanoff shoots Stern in the leg, incapacitating him. He is then placed under S.H.I.E.L.D custody, and referred to as 'Project Mr. Blue'.

His whereabouts and activity are forthwith unknown.

Insider reference to the comic books. In the Marvel universe Samuel Sterns was mutated by gamma radiation into The Leader.