What happens to the Narrator's baggage in the movie Fight Club?

In the Movie Fight Club, in the scene where the Narrator returns to his hometown airport after a business trip the baggage handlers had to turn his luggage over to the authorities. This is because his luggage was vibrating, which presumably led the throwers to believe it could be a bomb.

His luggage was confiscated, but it is never explicitly found or returned to him.

Is it just a huge coincidence that his baggage is suspected of containing a bomb, and in the next scene his apartment blows up - or is there some connection?

Are there any clues as to what happened to his luggage?

I'm just speculating here, as I wasn't able to perceive any clear answer to the above question:

The novel does explain what happened to his luggage:

His suitcase was inspected by the bomb squad on an abandoned runway.
The Narrator's electric razor was the culprit.

And from an early draft of the script: 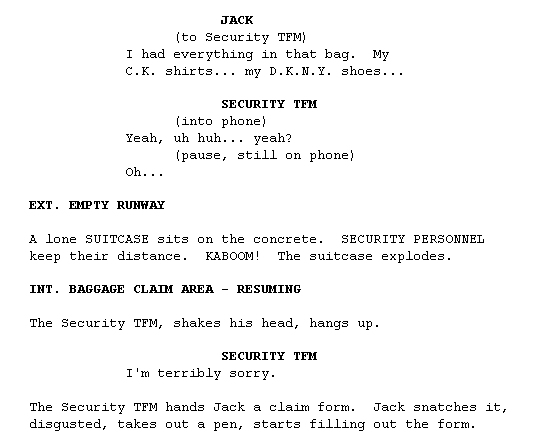 The explanation for what happens to the condo is explained in the movie. Initially it's assumed to be gas explosion, and a sequence shows how this would play out. The gas from his cooker is left on and it's triggered by a spark from the compressor in his refrigerator.

Later it is revealed by police forensics that it was caused by home-made dynamite. Clearly he sets the bomb himself (as Tyler) before going on the business trip. From the script (though this may have been slightly amended in the movie itself):

DETECTIVE STERN: Yes. It left a residue of ammonium oxalate and potassium perchloride. Do you know what that means?

JACK: What does that mean?

DETECTIVE STERN: It means it was homemade.

It is possibly a coincidence that his baggage is confiscated for a vibration, or perhaps Tyler added something suspicious but not actually dangerous to his luggage.

If the luggage had contained a bomb, the luggage was under investigation for the vibration. A bomb would have been found and not delivered to the condo, and they would have arrested him.

In the unrealistic event that they delivered the bomb in the bag to the apartment, it's unlikely that the bag would have got there before him from the airport, and who would let it into the condo?

He continued to be in contact with the police about the circumstances of the explosion, but he wasn't arrested, which he surely would have been if they had found a bomb.

I think we can safely assume that the luggage would eventually have been delivered to him, I just don't think its mentioned in the movie at all (but I could be wrong about that).

The whole thing is clearly engineered by Tyler to force his relocation to Paper Street. Force him to be homeless and possibly even without luggage.

Old question, but here's my answer: I recently watched this movie, and the suitcase is actually one of the biggest clues regarding Tyler Durden's true identity. Aside from Norton's "we have the same suitcase" line, notice how while his character is trying to figure out what happened to his suitcase, he sees Tyler Durden throw his own suitcase into the back of his convertible and drive off. Later that same night, the two of them are in the bar together, and as the walk out, Norton's character is now suddenly carrying a suitcase. Even if you wanted to argue that somehow he was "holding it for Tyler" this wouldn't make sense either because Norton had "called" Tyler while he was at home, meaning there is no reason for him to still have his suitcase with him.

As the narrator explicitly states that he and Tyler have the same suitcase, I always assumed that Tyler switched their luggage (or slipped something into The Narrator's bag-presumably actually something harmless, since The Narrator was never, as far as we know, actually detained or arrested.) which would delay him just long enough that he wouldn't be home when his condo blew up (Which, remember, was orchestrated by Tyler.)

TL;DR Tyler was behind the entire thing. Hope this helps! :)

Not the answer you're looking for? Browse other questions tagged fight-club .