Joey wearing pants - is it realistic?

In "El Dorado", Joey McDonald, the daughter of Kevin McDonald, is wearing pants whenever she rides a horse. Was it socially acceptable for a girl to wear pants in the Wild West?

Absolutely. There's very little writing on the subject, which in itself could be considered evidence that it wasn't so outrageous, but we do have a lot of photographs of frontierswomen wearing trousers, most of which I can find are from the book Women in Pants: Manly Maidens, Cowgirls, and Other Renegades:

There are also images of unknown women in trousers from the era, for example the name of this 1880s Arizona Scout has been lost, but it does suggest that men and women both wore the same type of clothing, as clearly a dress is not appropriate for battle or sleeping in the wilderness. 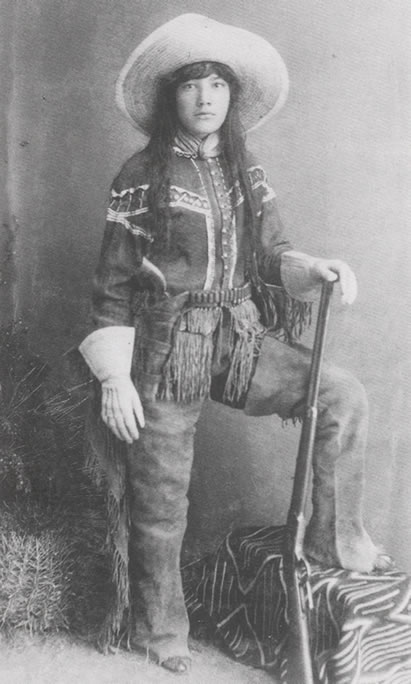 Not the answer you're looking for? Browse other questions tagged plot-explanation historical-accuracy el-dorado .

3
Why did Grandfather insist on Albert knowing Emilie's name before giving him the horse?
5
To whom did the bifocals belong to in the movie Chinatown?
13
Is there any rationale for the different colours of uniforms on the different series of Star Trek?
3
What is Ana's relationship to Deckard?
7
Why is it pointed out that Christopher must wear socks in?
6
When was the picture of Lockwood's daughter and Maisie taken?
11
Did the ending really happen in Baby Driver?
3
How was wearing her purse an evidence that lead to the capture of Anna?
6
In Knives Out, how did Marta get away with a certain lie without vomiting?