In Breaking Bad, was Mike Ehrmantraut 'the guy' that Saul knew could get Walt and Jesse in contact with a meth distributor (Gus)?

To refresh the memories, from the Mandala (season 2, episode 11) Sub-titles when Saul, Walt and Jesse are discussing the 38 pounds stock they have of the blue meth:

Saul: .. What you two need is an honest-to-God businessman. Somebody who treats your product like the simple high-margin commodity that it is. Somebody who ships out of town, deals only in bulk. Someone who's been doing this for 20 years and never been caught.

Saul: Let's just say I know a guy who knows a guy.

Was there any canon source (interviews, commentary on DVDs etc.) to suggest that 'guy' was actually Mike?

Mike was presumably working directly with Fring at that same time he was doing work for Saul, but whether he was leery of Saul knowing he had any connection with Gus/a meth distributor, is not clear.

Now I read that quoted material again, it strikes me as odd that Saul knew "doing this for 20 years" & "ships out of town".. That seems a surprising level of detail for someone who claims just to 'know a guy who knows a guy'.

The wiki concludes it was (probably) Mike. From Mike Ehrmantraut: Season 2..

It's never outright stated in the show, but it's the only logical conclusion based on the characters we meet: nobody else is shown to have contact with both Gus and Saul. In chronological order:

Gus is the distributor

Walt first figures this out in S02E11- Mandala after observing his behaviour and knowing Saul's description of him and it's obviously the case in later seasons:

Walt: Diet Coke, please. And five minutes of your time.

Walt: I was told that the man I would be meeting with is very careful. A cautious man. I believe we're alike in that way. If you are who I think you are you should give me another chance.

Gus: I don't think we're alike at all, Mr. White. You are not a cautious man at all. Your partner was late and he was high.

In S02E13- ABQ after Jesse discovers Jane is dead, he calls Walt, and at the end of the phone call, he says:

Walt: Just sit tight. I know who to call.

This certainly implies Walt called Saul, and Saul called Mike. This is backed up in S03E02- Caballo Sin Nombre, after Walt tells Saul that Skyler wants a divorce, Saul gets into his car and we cut to Mike:

Saul: It's me. We may have a wife problem. Look, I need eyes on it.

Mike: You got an address?

Later on, Mike is seen installing a bug into Walt's house and observes The Cousins arriving with a fireaxe. This leads us straight into:

After The Cousins have entered Walt's house, Mike picks up the phone and says:

It's me. There's something he should know about.

We then cut over to the man on the other end of the phone, who turns out to be Victor who was the man that Walt met in Los Pollos Hermanos to buy Walt's meth on behalf of Gus in Mandala: 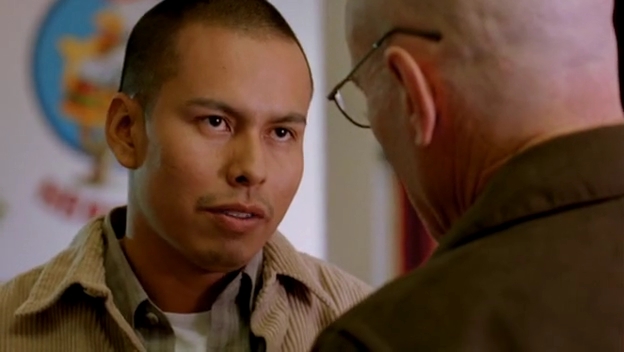 Caballo Sin Nombre ends with Victor approaching Gus in the Laundry, and passing on Mike's message: 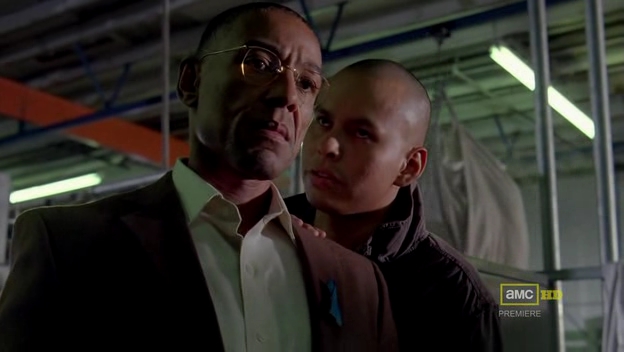 Their relationship is then confirmed in S03E04- Green Light when Mike and Gus meet to discuss Walt's cancer: 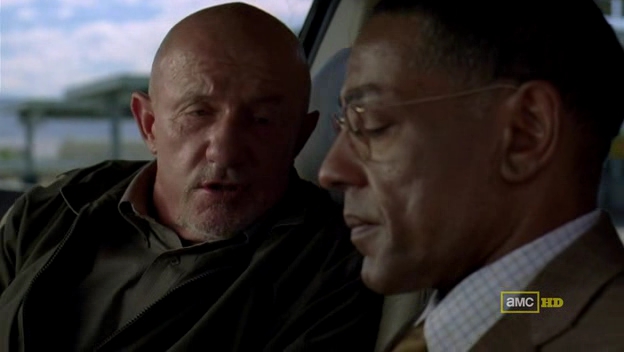 The only other candidate for "The guy" is Victor, but we never see Saul have contact with him.

Occam's razor would suggest that Mike being "the guy" is more likely than either Victor who misses 1 criteria on-screen, or there being a different contact who is never shown.

"I know a guy who knows a guy", is just one of the witty lines that Saul uses every now and then. It does not mean Saul did not know much about Gus. It should not be forgotten that Saul was a "Criminal" lawyer and he must have been in contact with a lot of criminals in the town. A lot of contacts. A guy like this must have had a lot of information about the criminal actvities going around in town and the criminals in the town. However it can assumed that Saul did not have any direct contact with Gus, but knew pretty well that Mike had direct contact with Gus. So my point is Saul could have known about Gus, not necessarily through Mike, but Saul knew that Mike was the guy to talk when a direct contact with Gus was needed. And to answer your question "Yes Mike was the guy. The guy who could arrange a meeting with Gus".

28
Why would Gus do business with Walter knowing his brother in-law was a DEA agent?
4
Why does Jesse act this way in the Final Season?
8
Why was Tuco willing to buy from Walt & Jesse?
12
What did the Meth Head think he was digging for?
7
Would Mike's guys have gone to jail bar the bomb?
3
Hank and Gomez getting footage of robbery at warehouse
9
Why was Heisenberg addressed as the King on many posters and images?
14
Does Saul Goodman know Hank Schrader is a DEA agent when he comes to meet Badger at APD interrogation room?
7
How does Walt know that Gus intends to kill him?
17
Why didn't Walter White suspect there might be video cameras in Gus' meth lab, while he suspected that there could be sound recorders?