Why does Batman talk to himself in the batvoice?

In Dark Knight Rises there is a scene where batman and Catwoman are on the roof, Catwoman disappears and leaves Batman on his own he then says,

My question is knowing he is alone (which he does) why doesn't Bruce just speak normally instead of using the gruffled bat/Scooby-Doo voice.

Despite frequently being ridiculed, according to the (now made unavailable) production notes for Batman Begins; Wayne is incapable of speaking without the Bat-voice when he is wearing his Cowl.

According to original drafts for the film:

"High-gain stereo microphones are concealed in the ears, allowing Batman to eavesdrop on distant conversations," the notes describe. The mikes can also amplify Batman's voice and broadcast it through a discreet speaker in the suit, giving his voice that distinctively gruff, disembodied sound.

While the original script included a scene that went over these Bat-details, mentions of Batman's embedded vocal distorter wound up being cut from the final film. (Still, the Batsuit's tiny speakers remained visible upon close inspection.) 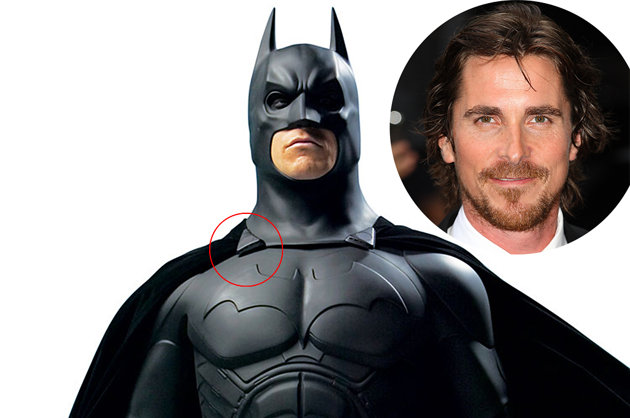 In discussing how he realized the mindset of Batman, Bale notes that his Batvoice contributed to him winning the role:

"I got there. They put me in Val Kilmer's suit. It didn't even fit properly, and I stood in it and I went 'I feel like an idiot.' What kind of guy walks around, dressed like a bat? And is then going to go 'Hello, how are you? Just ignore that I'm dressed as a bat.' Of course, he's meant to be doing this. If you look at the history of the guy and the pain that he went through. I went 'I can't do this in a normal voice. I have to become a beast in order to sell this to myself.'"

Whilst he isn't exactly 'going method' for the role of Batman, Bale indicates that for the character of Wayne, putting on the Batsuit is assuming a certain persona, as opposed to merely wearing a disguise.

In order to sustain the mindset of 'the beast', its plausible that when he dons the suit he becomes Batman, and this is a psychological state of which he is unwilling or unable to simply 'switch off', voice included.

Update: 'The microphone built into the suit' aspect of Batman's voice has since been validated by it's onscreen inclusion in Batman Vs Superman: Dawn of Justice

Most superheroes are, psychologically speaking, more-or-less regular people who adopt a superhero guise to fight crime. Hal Jordan turns into Green Lantern, Peter Parker becomes Spider-Man, and so on. In his modern incarnations, even Clark Kent (who is not precisely "normal", but is as close as he could get under the circumstances) becomes Superman.

Batman is different. The vigilante known as Batman is that person's "default" psyche. He adopts the Bruce Wayne guise in order to function in society in any context other than crimefighting. Even his own comrades don't work this way: Dick Grayson became Robin during his tenure, Barbara Gordon became Batgirl (and then Oracle, and then Batgirl again), and so forth. But Batman turns into Bruce Wayne.

This is a concept that has been explored in a number of Batman-related media. The most stark example may be in an episode of Batman Beyond, where a villain is projecting voices into his head. He realizes that this is a trick when the voices start to speak of him as Bruce, because, as he puts it, "that's not what I call myself in my head." Another example comes from The Sandman, which shows us the dreams of various superheroes. Most of them show up in their civilian guises in their dreams, but Batman does not.

Given all of this, it makes sense that he would talk to himself in the Batvoice: that's his normal head-voice. His "normal" voice is actually the fake one.

I disagree with Sonny's response to John Smith Optional's answer completely. As JSO said, once he's in the suit he is 100% committed to being "the beast". He can't afford to come out of character until he's safely at home. You have to realize, Batman isn't your typical superhero. He has no special powers. He's just using technology to his advantage. His weapons are hit gadgets and his mind, and his mind has to stay on-task 100% of the time that he's in the batsuit.

17
The Ending of Dark Knight Rises
11
Why does Blake draw the Batman symbols all over town?
15
Why does Batman trust Selina Kyle all the time?
17
Why does Bane's henchman sacrifice himself?
18
Does Bane's voice change in this scene because of plot?
9
So Bane was actually helping Batman all along?
1
When the last remaining bridge was destroyed why didn't they take the tunnel instead?
14
Why did the story stop after The Dark Knight Rises?
3
Why doesn't Bane kidnap Dr. Pavel before take-off in The Dark Knight Rises?
17
Who are the people in the Pit and why don't Bane, Talia and even Batman help them escape?