How are the face-in-suit segments of Iron Man filmed?

This question deals with the actors in a full-body shot of the suits, however I am wondering how the face-inside-the-suit segments are filmed, for example:

The animation shows several things which make this a difficult shot:

Can anyone find any information as to how this was filmed, for example if it was all CGI or perhaps some interesting practical effect where they reflect the images onto a screen in front of the camera?

TLDR: From Iron Man 3 onwards, at least, Illustrator, Cinema 4D and After Effects were used.

I can't find too much information about Iron Man 1 or 2, but in Iron Man 3 and beyond what you are referring to is the Heads Up Display, created by 3D designer Jayse Hansen.

From his website (which is offline at time of writing, but can be accessed via cache):

I basically put together a ‘HUD Bible’ that consisted of all the elements of the HUD, their purpose, each design iteration through the various suits, and how the new design was an upgrade in terms of use and function.

This bible was made up of picture after picture, like these: 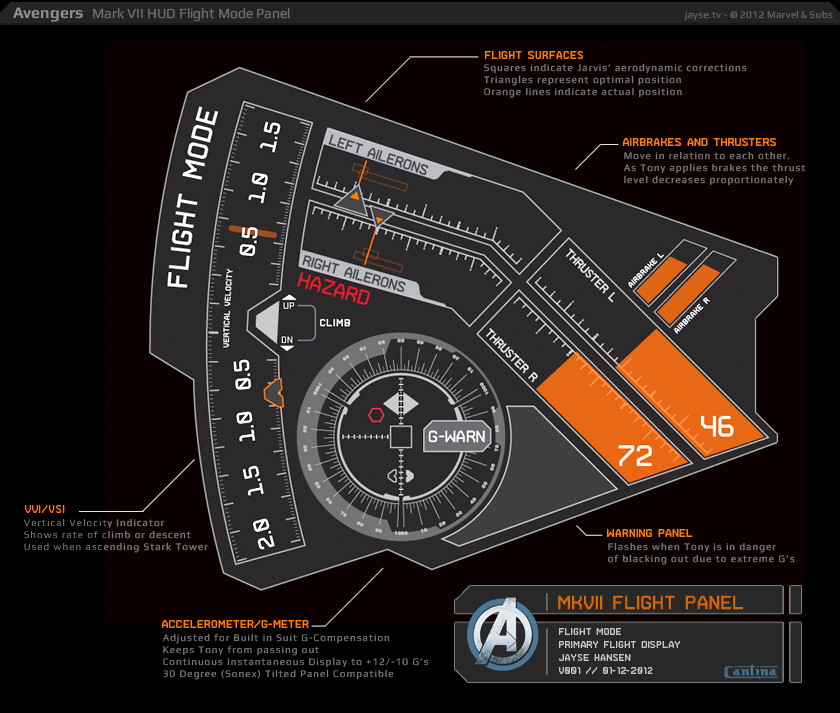 Explaining how these images were then transformed onto the screen:

I designed each element in Illustrator, exported to a PSD and imported into After Effects for Animation. Some elements were designed in Cinema 4D and also brought into After Effects for final color correction to Robert Downey Jr.’s face, interactive facial highlights and eye reflections. This was the first time the HUD was done in Stereo. The Mark VI was a bit flat in nature – allowing the Mark VII to come alive with dimension...

Since working in stereo (3d) meant that everything was in focus and clearly readable, it was important that each part had a function – rather than just being random graphics thrown in without specific purpose.

So using Illustrator, Cinema 4D and After Effects allowed the last image, for example, to be transformed into this: 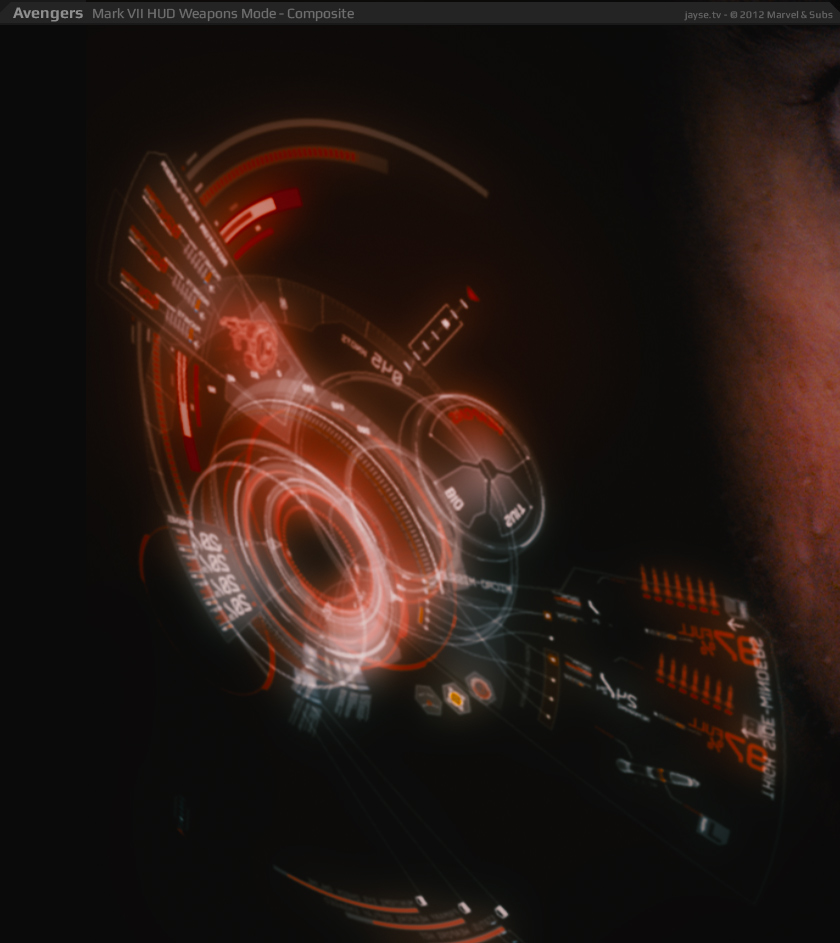 On a random trivia note, in an interview with The Next Web, the creator admitted designing the HUD based on an input from an A-10 Fighter Pilot, to ensure it was fit for purpose:

You said on your site that Iron Man’s Mark VII HUD was designed with input from an A-10 Fighter Pilot, is that something you like to do, take real-world experts and use them to inform your designs?

Yeah, I really love the research process. Since film production timelines are so short, the best way is to find people who are already experts in a particular field and get their input. With the HUD I knew I had to understand a bit of how real HUDs worked in order to take them to the next level, so I used flight sims, space shuttle sims and read books on glass cockpit instrumentation.

But the most pertinent info came from a combat pilot himself, because I could ask him how he’d want his HUD to function in a very specific situation. It’s fascinating and something I’ll continue learning more about because I still can’t fly a real jet fighter. But maybe one day!

The effects on the first Iron Man were created in Nuke, by a company called "The Orphanage".

They created illustrator templates and 3D elements which they imported in the shot. They match moved RDJ's head and eye movement and had the objects respond to that (sometimes with lag).

It was really hard to render the scene, because at some point, they had 87 various moving elements all animated separately.

They rendered the HUD 3 times - once through each eye - which they then projected on RDJ's eyes as a reflection, and then as the whole scene (with eye reflection)

Rendering the first frame took about 40 hours (per frame). However, with a few adjustments, they eventually got it down to about 2,5 minutes.

I'd suggest to watch "the foundry's" video (the company who creates nuke the software), where Dav Rauch from The Orphanage explains their work on the HUD sequence from Iron Man.

I'f you'd like to have some illustrations, of the widgets in the first movie, I'd suggest to take a look at the book: "The Art of Iron Man". They also have books for the other Movies (IM2, IM3, Avengers, Age of Ultron, Civil War...)

Not the answer you're looking for? Browse other questions tagged marvel-cinematic-universe effects the-avengers cinematography iron-man .

22
How are the Iron Man suit scenes filmed?

46
In Iron Man, why is Tony Stark fooled for so long?
22
How are the Iron Man suit scenes filmed?
34
How did they create the hole in Robert Downey Jr.'s chest for the Iron Man movie?
6
Association between antagonists in Iron Man 1 and Iron Man 3
11
Why did Iron Man fly so far before releasing the bomb?
10
Does Tony Stark urinate or poop in the Iron Man suit?
7
First in-helmet shots (like Iron Man)
40
How can Iron Man's suit withstand this?