Why did Hank not associate THE CAPN with 'Captain Cook'?

In one of the opening Breaking Bad episodes, Walt rides along with Hank and Steve as they raid a meth lab with information that they will discover 'Captain Cook'. Hank and Steve are having a wager on who they will find, Hank thinks it will be a person of Latino origins, but Steve counters "That's a white boy name" - and feels their quarry is Caucasian.

Although the person arrested is part Latino, part Asian, Steve was actually correct! Jesse Pinkman is spotted by Walt climbing out of the window of the next door neighbor's residence and making off in a car with the plates THE CAPN. Here is the number plate still on the car as seen at the beginning of Grilled (after Hank had shot it many times, possibly for being a silly bouncing car). 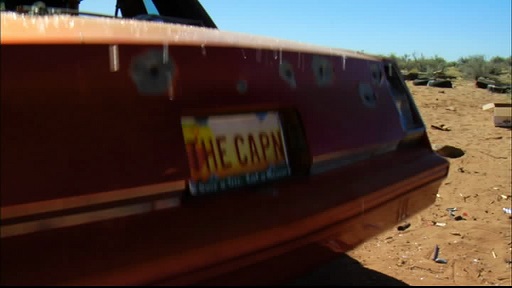 What seems strange though, is that to find the car, Hank had to rely on the 'low jack' that he (correctly) suspected the car had. Surely to do that, he must at some time have seen the make, model and registration of the car.

Why didn't Hank connect THE CAPN with the 'Captain Cook' he'd been after earlier in the year?

@wbogacz It is not a new thing in fiction (or real life for that matter) to find police or bureaucratic officials miss the most obvious in pursuit of the most elegant solution in their investigations or their jobs in general.

Yes, there is that..

@iandotkelly didn't he think he caught The Captain when he raided the cookhouse? Wasn't Jesse's partner at the time (Emilio) arrested?

Yes he definitely thought that. He even claimed half the bet total from Steve based on Emilio being part Latino.

While there are cases of him having thought he'd got his quarry but later thinking otherwise1, they were stronger cases with a wealth of associations that had arisen during his investigations.

(1) There is the prime example of Hank realizing that Walt might be Heisenberg based on the book he discovered in Walt's house:

This is the biggest plot hole in the show. Hank would have absolutely connected the license plate with the previous bust that Walt did his ride along. I think this is why Hank never mentions the plates, but strictly uses make and model. I think the writer's knew to keep it out of the audience's mind by not having Hank ever say the LP.

It doesn't matter that Emilio was arrested and presumed to be Captain Cook. More connections emerge. Crazy 8 snitched on Emilio, and both of them went missing. So that's a huge flag. They show Hank looking at an evidence board where he also connects Tuco to the two missing meth dealers. He utters something like he knows the connection is right in front of him but cant see it.

Jessie's car is with Tuco, and for that Hank brings Jessie to the station but can't get to the bottom of it; especially when Salamanca doesn't snitch. Before we discuss why Hank should also connect Walt, let's first get to Hank's bad policing.

Hank suspects Jessie of dealing with meth. Where did the $60k in the red duffle bag come from? Jessie denies that it is his. Fine. So why doesn't Hank utilize Walt? He could say something like he knows Walter reconnected with Jessie to buy weed. Hank could then try to bleed Walt of any info regarding meth. Like "has Jessie ever offered it to you, or have you seen any meth with Jessie?" Hank is clearly frustrated that Jessie walked, but Hank doesn't bother to question Walt. The school science lab theft is also on his mind. Why not assume Jessie, a former student, is the culprit? Again, another reason to talk to Walt.

Of course there's the security footage of two idiots stealing methlamine. Hank knows the new cooks are a duo. Jessie and Walt are slapping him in the face. Walt goes missing exactly when Jessie goes missing (when Tuco) has them. Walt is science smart but has no street smarts. (Hank's reaction to security footage) He directly knows Jessie (theCAPN) is clearly now mixed up with meth. Even if Walt is an unthinkable suspect, good police work would still be open to it, especially with some many clear connections and amazing coincidences.

If you rewatch 2nd season, it is clear as day. Hank is a good cop. He wouldn't have missed it. Especially with Walt acting weird with Hank (like why do criminals become criminals).

It is a genuine plot hole.

5
Why wasn't the HEPA Air Cleaner installed inside the lab?

13
Why the police do not keep an eye on Jesse after Hank is attacked?
34
Why does Hank throw Tuco's 'grill' into the river?
7
Why didn't Hank connect the locations the blue meth had been found with Gus?
18
What did Hank find under Walt's car in S2E2 (Grilled) and why was it there?
8
Why did the Pollos Hermanos attacks not bring more suspicion?
10
How did Hank know about the bullet holes before removing the duct tape?
14
Why was Hank tagging trees in the college?
34
How did Gus Fring know Hank killed Tuco?