What was Dan Wachsberger charged with (charge and evidence)?

What was Daniel "Dan" Wachsberger charged with in Breaking Bad, and what was the evidence? 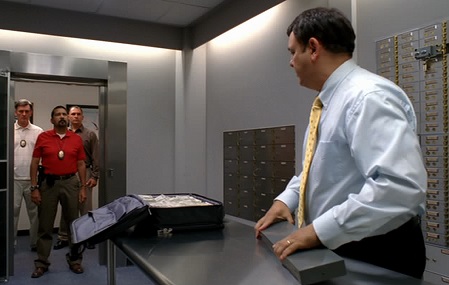 In Say My Name we see Dan in the middle of an 'awkward moment', with Steve Gomez and two other DEA agents looking on from the doorway. The suitcase full of money is open on the table to his right, a deposit box tray is in his hands, and one open deposit box can be seen behind him (there were a number open at that moment).

I'm guessing the audience was supposed to presume he was charged with (at the very least) money laundering, or some similar related charge. What I don't understand is how a bunch of money and him apparently depositing that money was proof of him being involved in the money laundering.

After all, surely (occasionally) a lawyer gets instructions from a client 'If X happens, deposit money in Y'. I would imagine there is nothing inherently illegal in that. Or is there? (I'm Australian, and not that familiar with Australia's laws on such matters, let alone those of the U.S.)

The woman who worked for the bank had (the first time he came) been quite chatty and friendly, but the 2nd visit she obviously knew what was about to happen to him, and was much more reticent and subdued about his gift. Was a bank officer supposed to be present when safe deposit boxes are accessed? That would explain the look of 'immediate guilt' he had on his face when he saw them, but would that (alone) land him in jail?

Another thing I couldn't determine (that might or might not be related) was whose names the deposit boxes were in. Were they in the name of the recipient (or a person trusted by them)?

This all seems extra strange in that when Mike was challenged over the $2 million in a cash deposit box for his grand-daughter he (gritted his teeth) shrugged and denied any knowledge of it. Couldn't the lawyer have done much the same thing?

What that thing? I thought it was sloppy someone leaving so much money in an open bag in the deposit box room, but apart from ogling it a bit (and touching the case) it's nothing to do with me mister!

The safety deposit boxes belonged to all of Mike's crew. When the heat was turned up and many of them were arrested, they needed to be hushed. As a result, they were each given $15,000 (into the nine safety deposit boxes), with a bigger sum going to Mike (along with a card reading: "To Kaylee on her 18th birthday").

The DEA realise that all nine men have the same lawyer - Dan Waschberger. Rather than keeping their focus on the nine men, they choose to start following Dan. When he tries to make his next drop off, it becomes obvious that he is giving large sums of money to all nine of his clients.

Whilst I don't know the exact laws he is guilty of, it seems likely it was due to illegal payments to clients, possession of stolen money (unless he could explain where the $150,000+ came from) or some other such activity.

It seems unlikely he could use the excuse you said (i.e. denying it was him) for a few reasons: One, the room probably has cameras. Two, his fingerprints are all over the money. Three, the DEA were clearly ready for him, so if they had checked the room beforehand and ascertained it was empty, his excuses about not knowing where the money is wouldn't have worked. He really, truly was caught red-handed.

It is later revealed that he flipped easily under questioning and pointed a finger at Mike, so his actual "crime" became less relevant as it became obvious the DEA were simply looking at a way to get at Mike's crew.

On a side note, he is incarcerated and ends up on Lydia's hit list for former crew members who need to be taken out. This is finally arranged by Walt and he is stabbed multiple times whilst on the phone (ironically to his lawyer) in the episode Gliding Over All.

i work in the banking industry and i know that when someone goes to their safe deposit box , you need both keys , the clients key and the bank key for that box to open...when the box is opened, then the bank personnel takes their key out and leaves the room, it only takes the client key to close the box...also unless they had a search than the DEA could not just walk in that safe deposit room...they probably had that search warrent...

5
What was the nature of Matt's gift to Kelly?
9
Why did Veera keep saying "dan...dan...dan...danaka!" and what does it mean?
9
Would Andy be shielded from the law in Mexico?
10
What was Dalton Russell's point in the movie Inside Man?
5
How does the 8 million legally belong to Byrde?
2
Who rang up Mike to find out where he was after Dan Waxberg flipped?
8
Why did Walter White insist that Jack's hitmen kill all of Mike's men in just 2 minutes?
4
How does Joey Marks know which bank to go to in S2E8 "Follow The Money"?