What did the diamond patterns on Fredrica's dress mean?

In The Silence of the Lambs, when Clarice is looking around Fredrica Bimmel's room she finds a dress with diamond patterns on it: 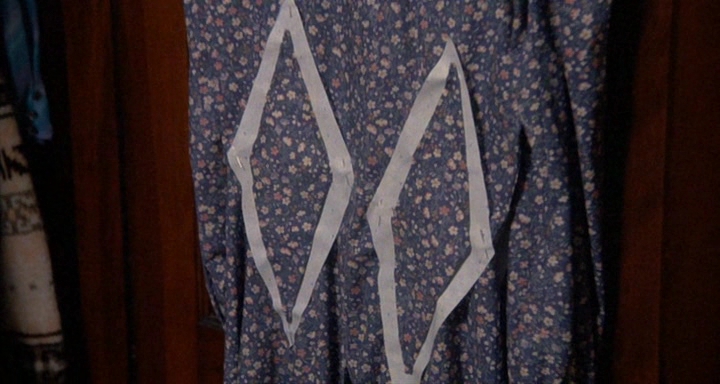 What does this mean? Was buffalo bill in that house? Or did it just spark a connection to a common tailoring practice?

Actually, when Clarice examined the dead girl in the local mortuary earlier on, one of the things she noticed was two unexplained diamond shaped areas cut out of the back of that girl, in addition to the gunshot wound made at close range (muzzle stamp on the skin) and a death's head moth (or pupae, I can't remember which) stuck, or shoved down, the throat of the dead girl.

Later on, after reviewing the case notes she realizes the fact that only the first girl killed was weighed down (third girl discovered), she and her study partner/roomate surmise that Buffalo Bill must have known his first victim. She then travels to Bimmel's hometown and goes to her house. Looking through the victims room, left in fairly pristine condition as a "shrine to the dead", she sees a house clearly through the window and realizes that not only was she known to BB, he watched her. She continues to look around the room and sees that Bimmel was a seamstress, making her own dresses, and further notes the uncompleted dress on the seamstress' form. It, too, has the diamond shaped patterns pinned to it.

It would be safe to surmise (plus I seem to recall that Clarice finds nudie pictures in a jewelry box) that Bimmel had gained weight/was now largish. When BBill takes his victims they are all largish (not 'big boned' but plump) (we know it is because Bill is forceably causing them to lose weight and having them use skin lotions to make their skin more pliable and easier to work with). When you skin something, beit an animal or, so I assume (I've never done it...:) a human, and treat the skin to be used as materiel to make clothing (I've done this with deerhide), it will shrink. When Clarice sees the dress on the dressmaker's form, the diamond shapes of material pinned to the back are exactly like what she saw missing from the girl in the mortuary. (Those pieces, in that shape, I assume, are a way that a dressmaker might plus up the size of the top of a dress.)

Now Clarice, who has proven to be extremely intuitive, puts all of the minor clues together and now knows that:

She attempts to call her mentor, but he thinks he's found BBill and puts her off. To clean up the records she continues on her interviews anyway and goes to the house where BBill might have lived, not knowing that is where he (still) lives. While waiting for the man to get the previous occupant's address, she sees sewing materiels, and more importantly, a death's head moth flitting around.

Now she knows the man in front of her is actually BBill himself, at which point, as she is (poorly) drawing her weapon, he slides into the back, heading downstairs.

The diamond pattern itself doesn't mean anything, but Clarice recognizes it from earlier. Cuts in the same pattern were taken from the skin of one of Buffalo Bill's earlier victims.

Clarice realized from her talks with Lecter that Buffalo Bill knew his first victim, Fredrica Bimmel, which was why Clarice was in Fredrica's room to begin with. So yes, Buffalo Bill almost certainly had been in that house.

Buffalo Bill had not necessarily been in Fredrica Bimmel's house. Fredrica worked for Buffalo Bill's mother, who ran a tailoring business out of her home. Buffalo Bill would see her every day that she came to work for his mother. I assume that it was her body that Starling found in the bath tub in the basement. I would also assume that he learned how to sew from his mother.

23
How does Clarice know "Jack Gordon" was actually the real Buffalo Bill?
7
How did Jack Crawford know Clarice was in danger once the FBI realized the house in Illinois was empty?
12
How did Cooper find the location of NASA from the patterns?
14
Why would they stop investigating on Arthur Leigh Allen?
7
Checking the Girl's Teeth
6
Why does cat point to the answer/safety/salvation in the Silence of the Lambs?
3
What is a cautionary diamond?
9
Why does Anderson laugh hysterically after Sherlock leaves?
1
How does Clarice deduce that Buffalo Bill knew his first victim?
4
Significance of Photos in Silence of The Lambs