Why did the Great Gasby (2013) movie erase the hints of Nick Carraway's homosexuality? [closed]

This question is about the two-oscar winning movie Great Gastby (2013) that was co-written and directed by Baz Luhrmann.

Only after I had seen this extraordinary movie and found out that F. Scott Fitzgerald’s greatest work "The Great Gastby" has been translated into a film five times did I decide to finally read the novel.

But the novel story turned out to be very different.

Tobey Maguire played Nick Carraway as a guileless heterosexual, but in the novel, his sexuality's a bit ambiguous:

"Come to lunch someday," [Mr. McKee] suggested, as we groaned down in the elevator.

"Keep your hands off the lever," snapped the elevator boy.

"I beg your pardon," said Mr. McKee with dignity, "I didn't know I was touching it."

. . . I was standing beside his bed and he was sitting up between the sheets, clad in his underwear, with a great portfolio in his hands.

Why would the great author Francis Scott Key Fitzgerald bother to include this strange passage, silly Nick in bed with the feminine Mr. McKee in his underwear at 3AM? If not to show some signs of Nick's sexual orientation, what other purpose could it possibly serve?

In the book, Nick meets Mr. McKee at a party and goes home with him. In the film, director Luhrmann made him go to the party, and made him ending up cuddling (or most likely) having sex with a woman.

Furthermore, in the movie, Nick is first attracted to Gatsby's parties by a glimpse of a lovely young woman. He seemed visibly affected by the sensuality of Myrtle Wilson. In the book, he recognizes her appeal, but showed revulsion and profound disapproval; later he was sneering at her "artificial laughter."

The film decided to erase the hints of Nick's gayness and I feel violated.

Not forgetting the feeling of excitement and mystery language when Nick met his wealthy neighbor Gatsby for the first time. He fell in love in first sight.

He smiled understandingly — much more than understandingly. It was one of those rare smiles with a quality of eternal reassurance in it, that you might come across four or five times in your life. It faced — or seemed to face — the whole external world for an instant, and then concentrated on you with an irresistible prejudice in your favor. It understood you just as far as you wanted to be understood, believed in you as you would like to believe in yourself, and assured you that it had precisely the impression of you that, at your best, you hoped to convey. 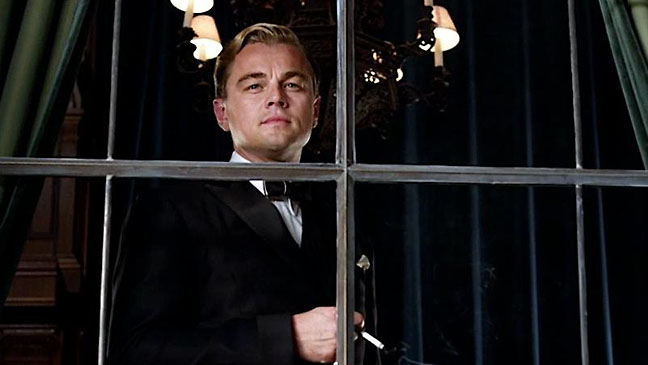 Nick wandered with vapid wonder in his smile. Nick loves Gatsby. He's obsessed with him: his hopes, his personality, his wealth, his life, his parties, his education, his aspiration, his true love for Daisy. He becomes so entangled in Gatsby's story because he is just too in love to have a life of his own.

Nick wanted us to believe, as he does, that Gatsby is different, that

only… the man who gives his name to his book, was exempt from [his] reaction

of scorn because of Jay’s

extraordinary gift for hope, a romantic readiness such that I have never found in any other person and which it is not likely I shall ever find again.

In other words, he just said “I loved this man.”

I feel cheated, because one important thing is how Nick’s sexuality affects what we are reading. If Nick is in love with Gatsby—and this seems pretty clear—then the entire novel operates as a rationalization of that misplaced love (unlike what is pictured in the movie). Probably, Nick romanticized Gatsby in the exact same way that Gatsby romanticized Daisy.

So why did this director Baz Luhrmann hide that? The film, in robbing him of his homosexuality (or bisexuality), also robs him of his reserve, and not coincidentally, of his intelligence. Expecting a more intelligent answer than in 2013, gay content is controversial, and gay characters can be hard for a lot of people to accept.. We're not in the 19th century anymore and there is no gay content anyway, just some signs of the gayness from the book. In the book he wasn't a gay character, there was some signs, why were they masked?

I'd guess the movie's motive for not introducing the McKee subplot is because that was only a minor subplot of the book. And re-telling a book story in movie form, when you've got to get all the key details on screen in just 2 or 3 hours, means you have to omit many minor details.

The core story of The Great Gatsby is about Gatsby and the world he lived in, not about Nick or Nick's potential attraction to Gatsby.

In book form, there is plenty of room for the subplot suggestion that Nick is gay -- and the author Fitzgerald introduced the suggestion so subtly that most readers miss it. In the movie, however, throwing "Nick might be gay" at viewers along with everything else, in just 2 or 3 hours, could overwhelm them and/or distract from the core story -- and I'm not sure how it could be done as subtly on-screen as Fitzgerald pulled it off in the prose.

We can never know why, maybe he director didn't overthink and simply decided to not include it. I got this from an interview with him:

What scenes are absolutely fundamental to the story? What scenes must be in our film? And what scenes can we do with out, even if we love them?

So he just said they were picky while choosing what scenes to do and we really don't know why he de-gayed the movie, he mentioned nothing in his interviews or commentaries about it.

Not the answer you're looking for? Browse other questions tagged plot-explanation analysis character book-adaptation the-great-gatsby .

6
Was J. Gatsby a shallow, superficial man?
6
Has the book 'Non - Stop' by Brian Aldiss ever been adapted for film/tv?
6
Why was Amy postponing the inevitable and was it inevitable at all?
3
Why didn't Hans Huberman slap Liesel in the movie, like he did in the book?
2
"Escobar: Paradise Lost": who died?
9
Is True Detective (S2) based on "The Big Nowhere"?
9
Did the filmmakers of Zootopia have a "gay agenda"?
1
What was Tom's position about Daisy in The Great Gatsby?
7
What is the significance of making Eddie a hopeless virgin?