In the Avengers movie, why did the Chitauri troops die almost instantly when the portal closed?

Although the Avengers is a great movie in most aspects, it has its own faults or in need of explanations in certain situations, such as:

Why would Chitauri troops die as soon as the portal closed!? It's as if their brains were wired to mother-ship.

Why would their resistance to gravitation depend upon the portal/mother-ship!?

During the Avengers director commentary, Joss Whedon touches on this (and how he hated to take this shortcut!). He refers to it as being a sort of queen bee and drones situation. When the proverbial queen on the other side of the portal dies, all the minions lose all guidance and will to live, so they all just drop dead.

Mr. Whedon states they took this route so as to allow the fight to wrap up then and there. Otherwise they'd have to have this triumphant strike happen, the portal would close, and then the Avengers would have to spend hours hunting down all the Chitauri in New York City. That would rob the good guys of their victorious moment.

The Chitauri did not stop working when the portal closed as the portal did not close until after the ship had been destroyed. What I took from this meant they were a linked consciousness where once the main body dies the rest of the creatures linked to it would also die (see the buggers from Ender's Game).

Marvel has also covered this in their wiki page in the Alternate reality section.

This question came up on the Science Fiction and Fantasy Stack Exchange, and there's a canonical answer now in Agents of S.H.I.E.L.D. material. Here is my answer from there, quoted word for word.

This was apparently explained in the pilot episode of Agents of S.H.I.E.L.D. where they depict a Chitauri neural link that Agent Grant Ward liberates from Vanchat in Paris.

This S.H.I.E.L.D. evidence sheet provides more details (which, despite the numerous misspellings, seems to be an official artifact of the series). 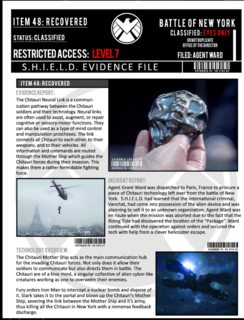 The Chitauri Neural Link is a communication pathway between the Chitauri soldiers and their technology. Neural links are often used to assist, augment, or repair cognitive or sensory-motor functions. They can also be used as a type of mind control and manipulation prostheses. The link connects all Chitauri to each other, to their weapons, and to their vehicles. All information and commands are routed through the Mother Ship which guides the Chitauri forces during their invasion. This makes them a rather formidable fighting force.

The Chitauri Mother Ship acts as the main communication hub for the invading Chitauri forces. Not only does it allow their soldiers to communicate but also directs them in battle. The Chitauri are of a hive mind, a singular collective of alien cybor-like creatures working as one to overwelm their enemies.

Fury orders Iron Man to intercept a nuclear bomb and dispose of it. Stark takes it to the portal and blows up the Chitauri Mother Ship, severing the link between the Mother Ship and it's army, thus killing all the Chitauri in New York with a immense feedback discharge.

They died before the portal was closed, but after the nuke hit the thingie. Conclusion: the thingie was relevant to them working/staying alive.