Why was the episode "The Mountain of Youth" almost lost? 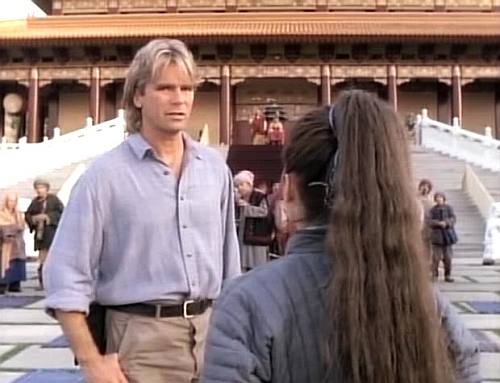 The Mountain of Youth aired one month after the series finale and was billed as "the lost episode":

MacGyver joins Jack Dalton in Kabulstan on a search for a fountain of youth in a land that appears to be a real Shangri-La - and finds himself battling nuclear terrorists in the process.

I know there are two episode that never aired in Germany. One of those is about Neo-Nazis, who at one point trap MacGyver in a small room and pump in gas to kill him, so I kind of understand why this episode wasn't shown in Germany (in the early 90's).

But with "The Mountain of Youth" I can't see a reason why it was held back in the US.

It sounds like ABC just didn't care much about the show anymore, but trying to cash in on a sudden spike in popularity as the series came to a close.

I found this statement by KateR on a Richard Dean Anderson fan forum (because that exists):

After season six, MacGyver was only picked up for a half season, which is 13 episodes. They left Vancouver and returned to LA, and they shot the final 13 episodes there.

The Coltons episode is technically a sixth season episode. It was shot in Vancouver, and it was actually scheduled to air during season six. Without going back to check, I forget exactly where it came in the lineup, but it was near the end of sixth season, and I still have my original recordings of MacGyver that have the previews for the Coltons coming up the next week. But something unexpected happened that preemped the episode, and rather than airing it a week later, they dropped it altogether. It was never really a regular episode of MacGyver - it was intended to be the pilot for a new spinoff series - so it is possible that the studio's decision not to pick up the pilot affected their decision whether or not to air it.

Jump ahead to seventh season, and they began airing the new episodes, then, for whatever reason (perhaps due to the filming schedule?), they inserted the Coltons episode into the middle of season seven. The final episode was The Stringer, but the ratings were slipping, so they stopped airing episodes at the Christmas break, never aired Mountain of Youth, and held the season finale for a planned special event in April.

The Stringer aired in April as the season finale, but the ratings bounced back so high that ABC decided to continue airing episodes through the summer. They pulled out The Mountain of Youth, "the lost episode," and aired it the next month, followed by a few reruns through the summer until the new season started.

So that's the story of why season 7 was shorter than the others, how The Coltons ended up in season 7 instead of 6, and The Mountain of Youth was lost and found.

While not conclusive, it has enough detail and information that it does sound like someone who remembers that time pretty well.

It also matches up with information found at the MacGyver World Episode Guide:

This is "the lost episode". The Mountain of Youth was filmed before "The Stringer" and the production company decided to air it because the finale had done so well in the ratings. Originally this episode was rumored to be lost. (locked up in the vault never to air)

and a review of season 7 after being released on DVD [emphasis mine]:

Most of the remaining episodes were clunkers to one extent or another, but the worst of the worst include "The Walking Dead", where MacGyver gets kidnapped by a voodoo cult and turned into a zombie; "The Coltons", a yawningly dull episode intended as a spinoff featuring the three bounty hunter brothers from several previous episodes with only two cameo appearances by MacGyver himself;

Not the answer you're looking for? Browse other questions tagged analysis macgyver .

19
Why was MacGyver's first name kept a mystery?
7
Interpretation of the ending of Lost In Translation
9
What was the symbolism behind pushing "The Button" in Lost?
11
Significance of Charlie's tattoo in the Lost series
8
Meaning of the troubled parent theme in Lost
5
Why was John Locke given choice to select an object by Richard in Lost S04E11?
7
What is the point of Ozark's flashback episode?
9
Why is the episode called The National Anthem?