What is Black Widow's service record?

During Captain America: The Winter Soldier a number of details about Black Widow are disclosed.

Firstly, that she was born in 1984, making her 30 years old during the events of CA:TWS

Secondly, that she was indeed born in Stalingrad, and worked for The KGB.

We know that Natalia/Natasha was trained as a child soldier: but if, as she states, her 'red ledger' was built whilst she was working for the KGB, she could only have been working for the Russians until she was 7 years old, 1991 being the year the KGB was disbanded.

She specifically mentions the KGB as being the organization she worked for, when she discusses her 'Clean Start'. If there were another, more malevolent organisation she served under, wouldn't she have referred to them instead? If she had continued working for the Russians, wouldn't the majority of her career have occurred under the FSB: and as such why wouldn't she have named them? Does this mean she worked for someone else?

Is it possible that Black Widow is referring only to her actions during the first 7 years of her life (which, lets face it, could only have plausibly seen a very very short period of active service)?

Does the MCU/Earth-199999 continuity provide any details on who she worked for between the fall of the KGB and SHIELD? is it possible she was recruited straight to SHIELD by Barton, at age 7?

I'm aware that the wider Marvel Universes, whilst operating different continuities, provide supportive commentary on each other to create a unified ballast across brand... do any of the other Marvel continuities make reference to Black Widow's past in a way that corroborates, or is reference by the MCU?

I don't need answers that link to the Marvel Wiki: its frequently inaccurate and constantly being updated. I'm trying to find if someone can find a precedent for this continuity in other work: whether it be Cinematic or otherwise...

They had to keep some of her comic backstory relevant, or the fanboys would have cried foul. In the comics, she was actually born in the late 20's/early 30's. If you recall the scene in The Avengers, when she lures Banner out, she uses a very young girl and remarks something like, "I was about her age when I started." So the MCU already has her working at an extremely young age for the KGB, and her comic backstory involves her working for the KGB, as it was initially written in the 60's.

Just for those interested, I found a Non-MCU confirmed bit of trivia that explains some of this 'Marvel-time' craziness... 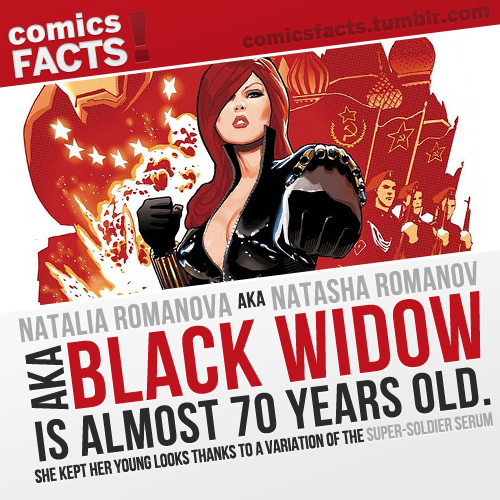 16
Examining the limits of the MCU?

14
Are there any more instances of MCU characters crossing over into Non Marvel Entertainment properties?
11
Was Nick Fury treated with GH-325?
27
Did Black Widow really trick Loki into revealing his plans?
3
Who made Captain America's shield and where did the Vibranium come from?
27
What was done to prevent Black Widow from getting pregnant?
26
Who are Nick Fury and Maria Hill working for?
1
Is there a canonical reason as to why Bucky got "nerfed" throughout the MCU?