Are Sean Bean's characters more prone to die than others?

Ask Question
Asked 8 years ago
Modified 10 months ago
Viewed 5k times
32
Want to improve this post? Provide detailed answers to this question, including citations and an explanation of why your answer is correct. Answers without enough detail may be edited or deleted. 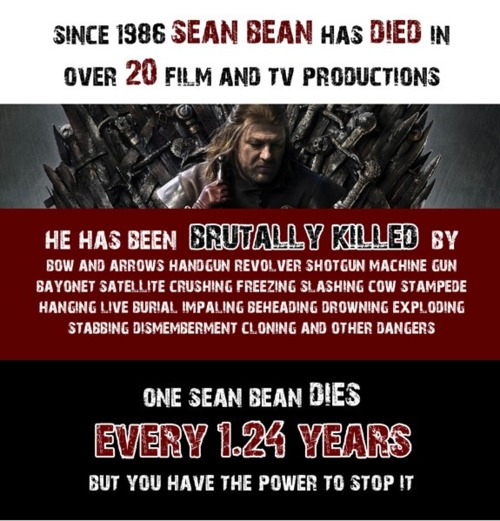 An image making the rounds on the Internet claims that

Since 1986, Sean Bean has died in over 20 films and TV productions.

He has been brutally killed by

One Sean Bean dies every 1.24 years.
But you have the power to stop it.

Of course, the first question is if this is correct, but I think people have already looked into that.

Reading the answers and the comments, I realise there are more sides to this.

Does Sean Bean often play characters that die? That has been answered by Bill the Lizard and Simon.

But there's another question that's much harder to answer, which is if characters played by Sean Bean die more often than characters played by other actors. Perhaps Sean Bean only plays in productions with an overall high body count, or perhaps every producer, director, and casting director goes like "if he dies, ask Sean Bean!".
This is only answerable by going through each and every production Sean Bean's been in, and tallying, I think.

If you average the number of deaths from Bill the Lizard's answer over the length of the actor's career and number of appearances, only Bela Lugosi could be said to have died more and more often than Sean Bean.

There are several actors who appear to die frequently in films, and Sean Bean is near the top of the list. According to Which Actors Die the Most in Movies? and Actors Who Die Really Often in Movies & TV shows, here are a few of the most notable:

Some actors are more prone to dying than others. It's not directly related to their identity, but rather the typical role that they get cast in. There have been some good examples of actors who have died more than Sean Bean, but the explanation is relatively simple for most of them: they play villains, and villains are narratively prone to dying.

Tim Curry, Alan Rickman, Christopher Lee, ... These actors are so delightful at playing a villain, that they are logically more prone to playing the bad guy. Statistically, they will end up losing the plot more often than any actor who does not get typecast as a villain.

But it's slightly different for Sean Bean. The two big roles where he dies (Boromir and Ned Stark) were both honorable men.
Sean's general role is somewhat easy to recognize. Principled (although sometimes he is on the wrong end of the spectrum, his characters generally believe they are on the right side of things), wise, lives by a code, usually does not act recklessly, and he generally tries to instill his code in the people he cares about (with a hint of feeling like he's superior, but in a generally kind way).

There are many reasons why such a character is likely to die:

These are all relatively common plot devices. And Sean Bean manages to tick all of these boxes with the general roles he gets cast in.

When Boromir and Ned Stark show their strong sense of honor and duty, they paint themselves as an innate good guy. This is almost the exact narrative equivalent of showing your family pictures to your fellow soldiers (and it's a common trope that these characters tend to always end up dying to create some drama).

And creating drama is exactly why these characters often die.

That's unfair. It creates drama for the character's friends, it paints the plot as harsh and unforgiving.

This is why Ned Stark dies. Morally, he was superior to pretty much everyone else. If Ned Stark had taken the throne, so much of the turmoil of the subsequent seasons would simply not have occurred.
His death had the viewer screaming at the screen, much like how Obi-Wan stood there screaming at Anakin. He was supposed to be the chosen one, the one to show us the path.

Boromir talks at length about how his people have suffered because they are right next to Mordor. They are dying constantly, just so they can keep everyone else safe.
This put Boromir in a similar spot as the soldier who shows family pictures and doesn't really want to fight a war. Boromir is stuck in a war with the Orcs due to geographically being close to them, and wants to get out of the war. Not because he wishes to claim something for himself, but because he doesn't want to lose what he has.

A non-aggressive, honor-bound man, who doesn't take from others and merely wishes to preserve the things he loves. He suffers continual hardship, yet remains level-headed. And he ends up corrupted by Sauron, temporarily turning him into what he has never let himself become (jealous, greedy, aggressive).
Boromir wasn't (narratively) killed by the arrows. He was killed by being corrupted. A good man, arguably the best of the fellowship (due to suffering such hardness yet still taking it in stride), brought to his knees.

In this way, Boromir is no different from Ned Stark. Their deaths are so wrong that they put fuel to the fire of the good guys.

As a complement for the previous answers, do not forget about Sir Christopher Lee. Having played villains in quite a lot of movies, especially during the 1960s-1970s, he was prone to die more often than any other.

Here is a nice video about Sean Bean, Bela Lugosi, Sir Christopher Lee and other actors that die a lot on screen (in french, no subtitles but accessible enough): Le Fossoyeur de Films (The Movies' Gravedigger) - Sean Bean and the Death. 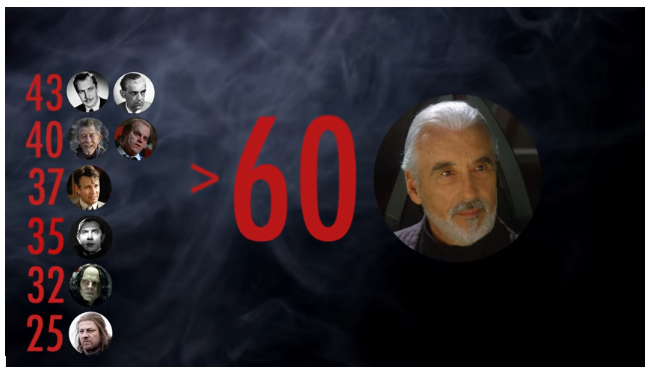 Kim Coates has an honorable mention with more than 40 deaths but never starred as the main character in any of his movies.

The analysis states that if Sean Bean seems to die more often than the others, it is essentially because he was casted as strong characters whose deaths had a major impact in popular culture (Boromir, Edard Stark, etc.), and people identify him more quickly due to these traits.

Not the answer you're looking for? Browse other questions tagged analysis casting .

4
Is there a name for a dead character (both male and female) that appears more frequently than others in TV / movie scripts?
4
Are the stories connected by more than just marginal references?
4
Why was Michael Gambon's Dumbledore allowed to be so much more assertive than Richard Harris'?
4
Why do TV series creators prefer to remove characters rather than recast them?
10
Why were there more than 10 things that she hates in Kat's poem?
6
Were black actors more prominent in the 80s than they are now?
6
Are the characters at the end chosen for production-related reasons?
5
Is the rowboat painting in more than 2 episodes and does it have multiple meanings?