Why did the cousins murder the other people in the smuggling truck?

As The Cousins were making their way into the US to kill Heisenberg (Breaking Bad, Season 3, Episode 1), they are at one point riding in the back of a truck (concealed within walls made from bales of hay).

A young man is being chatty, boasting about how he has made the trip 3 times, and has a job waiting. Nobody else jumps into the conversation so he directs his next comments to the cousins, noting how they have nice shoes. Then he notices the shoe tips have silver on them, looks close to see a skull, and suddenly falls silent (I guess recognizing them as being cartel members).

Moments later, the view pulls back to show the truck from the outside and shots ring out as the cousins supposedly kill all the other passengers. The driver, hearing the commotion, stops, goes to the back of the truck, and asks what is going on. They kick open the back, he starts to run, they shoot him as well.

Then they set the truck on fire, and leave.

Did they kill everyone because the young man recognized they were cartel? Did they always intend to kill everyone else? If the latter, why?

The young boy in the truck recognised the skull on their boots: 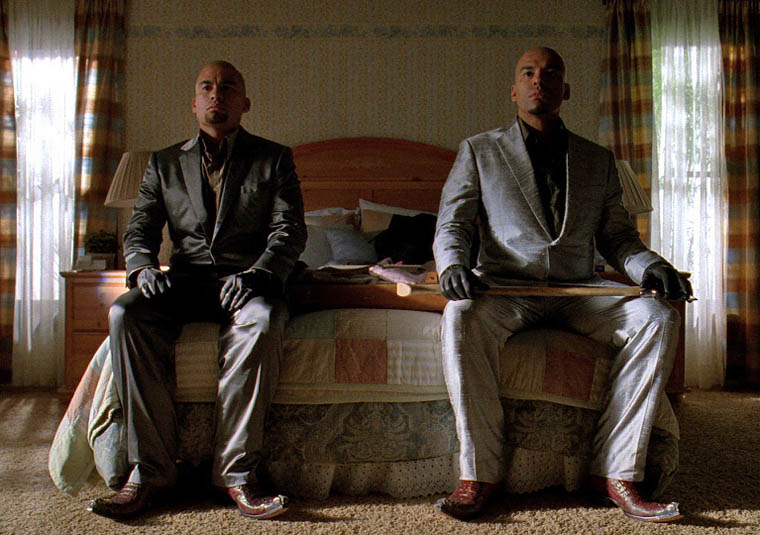 This meant he could later identify them to law enforcement, if asked - so he had to be eliminated. However, it seems likely that he would have met an unfortunate end anyway, as The Cousins were feeling particular vicious that day.

It appears they took out the truck and all its occupants for two reasons:

Yes they were killed because they were recognized, the danger would be that someone would try and escape the truck, exposing them.

The fact they wore the shoes and didn't cover/hide them indicates they intended to kill them at some point, as they weren't too worried about being recognized.

Because the boy recognized them as cartel. Just after the boy asked about and then realized what the "little silver things" were on the tips of the cousin's boots, the cousins looked at each other. As if to say, "not only did the kid recognize that we are cartel, he also essentially announced it to all of the passengers, so we have to kill them all. right now. before any of them get any ideas such as to try and over power us or escape, etc."

Because they were essentially on an undercover mission and couldn't risk word getting out in case their target caught wind.

I have a theory that everyone else on the truck had already noticed their shoes and recognized them as cartel members and that's why they didn't join in on the boy's conversation.

7
Why did the truck driver shoot Selene?
13
Did the cousins intend to return for their Mercedes?
8
How does Walt deduce that he was the prime target of the Cousins?
6
Who tips Hank off about his imminent assassination by The Cousins?
19
In the tunnel, why is there a stopped truck and why does John McClane shoot the people in it?
24
In 'Sicario', what was the purpose of raiding the tunnel?
1
How Geiger Murder and Sean Reagan Murder related to each other?
11
Did Vince Gilligan or other major Breaking Bad participants acknowledge the Wire as an inspiration? Did any Wire people comment on Breaking Bad?
2
Why did Bald Rob want to cut Earl's truck?