Why didn't Hank connect the locations the blue meth had been found with Gus?

At the end of Breaking Bad season 2, Hank Schrader is showing a map to his crew. It contains pins for the locations that the blue meth had been seen. He noted that it was appearing all across the south west, but for New Mexico itself, and reasoned that Heisenberg had smartened up and wasn't supplying it in his home state any longer. 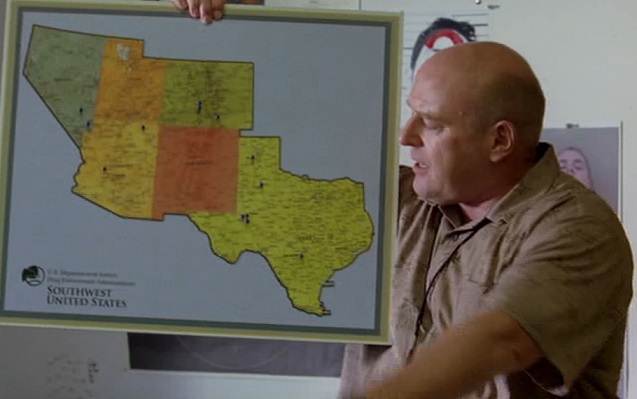 Later, he comes to suspect Gustavo Fring of his involvement and tries (unsuccessfully) to convince his work mate Steve Gomez and ASAC George Merkert, but there is no mention of the map, nor any comment that Los Pollos Hermanos has branches in each of those states.

Did he forget the map, or is there something I overlooked as to why he did not mention it?

The (two) episodes you are referring to are Problem Dog and Hermanos - episodes 7 and 8 of Season 4.

In the former, Hank reveals his doubts to his colleagues and reveals that a fingerprint from Gus Frings was found at Gale's apartment.

This leads them to call him in for questioning in the following episode. Gus reveals he had visited Gale to congratulate him on a scholarship. When pressed on why he has no records from his time in Chile, he reasons that he left during the dictatorship of Pinochet and record keeping was awful.

These answers appear to appease all the other lawmen present (except Hank) and Gus is released.

Following this, he begins to investigate Gus' businesses (with Walt) to try and find some sort of connection.

Now, as to your question regarding the map - I think the most likely reason is because it's far too tenuous a connection. Gus Frings is a respected business man in charge of a chain operating across the entire South West. Whilst Hank could have mentioned it, it seems unlikely his colleagues would accept it. He happens to have restaurants around the cities/districts that the drugs were found in? Well, so do a ton of other business men. What makes Frings special? The fingerprint, obviously - except Hank's colleagues have now decided that was totally innocent.

So to proceed, Hank needed something else. That, in my opinion, is why he never mentioned the map. It wouldn't have provided any sort of definitive proof.

21
Why didn't Hank or Gomez call for help?
8
Why was Tuco willing to buy from Walt & Jesse?
5
Why did Hank not associate THE CAPN with 'Captain Cook'?
6
Why was Walt giving free meth to Gus
14
What is the symbolism of the blue meth?
6
Why didn't Gus tell Jesse his plan for the trip to Mexico?
7
After the events of S4E11, why didn't Gus shadow Walt?
6
Why didn't Hank arrest Walt as soon as he found out?
17
Why didn't Walter White suspect there might be video cameras in Gus' meth lab, while he suspected that there could be sound recorders?